Despite the rally off recent lows so far in October, it remains a very challenging market. Oil rallied early in October, but that rebound has fizzled and the energy and commodity complexes remain under duress with more and more distress in the debts of a great deal of companies in these sectors.

Financial institutions continue to be under pressure because of low-interest rates and heightened regulatory costs.

Industrials, Manufacturers and Technology are getting hit by a strong dollar and weak global demand.

Small caps are down some 10% from highs this summer even with improved performance in October.

In short, it is hard to find pockets of strength in this market. Even some of the most experienced investors in the market are having a very tough go.

Hedge Funds are having their worst year since the financial crisis and several high profile hedge funds have shut down in recent months. Finding winners is crucial to good investment performance but almost as important is avoiding landmines that can blow a hole in your portfolio.

At the beginning of the year, I provided a free report on “3 Stocks to Avoid in 2015” which consisted of GoPro (NASDAQ: GPRO), Tesla Motors (NASDAQ: TSLA) and Amazon (NASDAQ: AMZN).

GoPro has been an absolute disaster thanks to increasing competition in the space. The stock is down some 60% so far in 2015 as a result. Tesla defied gravity through summer but has recently come down due to falling reliability scores from Consumer Reports among other factors.

The stock is slightly down for the year, but still vulnerable to further declines given how the shares are priced pretty much for protection. At a 100 times next year’s profit consensus, investors are making a big bet that this niche auto play can transition into a mass market automaker without any hiccups while maintaining its current huge margins. That is a wager I would be weary of at the current time.

Amazon has held up well and had a good year as investors continue to give the company a pass on actually generating earnings or free cash flow as it increases market share. That is not a proposition I am willing to buy into given I am primarily a value investor driven by fundamentals. It is hard for me to find value in the company when it is trading at some 400 times this year’s likely profits. 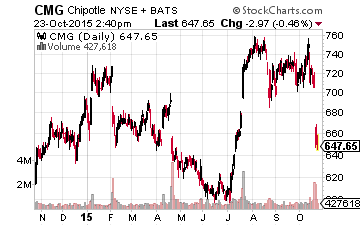 Today, I offer up two more high-beta stocks with sky-high valuations that I would avoid in the current market even though both companies offer terrific products.

In the quarter just closed, same-store sales growth was less than three percent, substantially under the high single digit levels of recent years. In addition, most of that sales increase was due to increases in menu prices and not additional foot traffic.

In addition, restaurants are coming under increasing cost pressure as the Affordable Care Act gets fully implemented. Minimum wage laws in many states and localities obviously will hit margins and the recent decision by the National Labor Relations Board is not helpful to franchise purveyors like those in the restaurant sector.

Even after the decline triggered by disappointing results and guidance, the shares are expensive at almost 40 times this year’s expected earnings given the company’s diminishing growth trajectory. 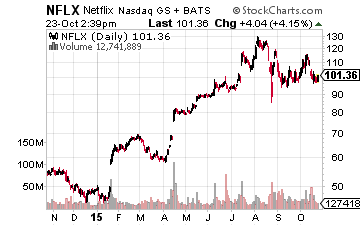 Although I love “House of Cards,” I also cannot bring myself to purchase Netflix (NASDAQ: NFLX) at current valuations.

The stock is already under some pressure as it did not show expected subscriber growth when it reported quarterly results on October 14th. The company also missed consensus estimates on both the top and bottom line.

The stock is down some $30.00 a share from recent highs of just under $130.00 a share. The company has churned out a non-stop stream of originally produced hits, but eventually it will release a “clunker” just like every other studio has done throughout history which could erode its reputation of always producing hits.

The company is also starting to see increasing competition and rolling out to international markets is an expensive endeavor.

More importantly, even after the stock’s steep decline it is not still not cheap. The stock goes for around $100.00 a share but should post just better than breakeven results in both FY2015 and FY2016, hardly a bargain using traditional valuation measures.

In addition, insiders sold tens of millions of dollars of their shares over the summer; something I don’t view as encouraging. As previously stated, I love this service but cannot say the same for the stock.

Hopefully the market stages a year-end rally, although I am not sanguine on equities at the current moment. If volatility continues to be heightened, the stocks profiled above are vulnerable to additional declines.