The stock market is a volatile place.

I’ve seen quite a few stocks over just the last week or two drop by 10% or 15% in one single day. Likewise, I’ve seen many other stocks pop by equal percentages over the course of just a day.

While reduced expectations, deteriorating fundamentals, or changing market conditions (be it long term or short term) can all have adverse effects on stock prices, a lot of that is out of your control as an individual retail investor.

[ad#Google Adsense 336×280-IA]However, you do have control over what you pay for a stock.

And you don’t want to be left holding the bag, regretting that you paid too much for a stock after seeing it drop somewhat significantly because a flinch on a conference call caused the valuation to come back in line with reality.

I always try to pay a price that’s equal to or less than fair value for a stock.

But the lower, the better.

If you’re able to buy a stock for 20% less than what it’s really worth, you have a sizable margin of safety already built in.

If the company notes some kind of short-term issue and the stock takes a hit, you’ve got a huge safety valve there if you bought in for much less than what it was worth. At that point, the odds of a stock dropping significantly are much lower because it’s just one less thing working against you.

Why add that to your plate?

Why take on additional risk when you don’t have to?

The only issue – if you want to call it that – is that you have to first figure out what a company (and its stock) is worth before you can possibly know whether you’re underpaying over overpaying.

But that’s where a system like the one proposed by Dave Van Knapp here on the site becomes pretty handy. Certainly not the only system you can use, but it’s a great point of reference in terms of coming up with a framework with which to reliably and regularly value stocks.

Now, that system focuses on dividend growth stocks. As do I as an investor, as you can see with my real-life portfolio.

There’s a number of reasons why we focus on dividend growth stocks.

I think as good a reason as any is the fact that you’re automatically filtering out the undesirables. Any company that can’t routinely grow its profit over the long term is extremely unlikely to be able to pay out growing dividends for decades. As such, I know when looking at dividend growth stocks that I’m looking at companies that are able to regularly grow, increase profit, and reward shareholders with their rightful share of that growing profit in the form of increasing dividends.

I find this strategy to be so robust that I’m actually betting my early retirement on it, with a plan to start living off of the dividend income my portfolio generates by 40 years old.

If you’re interested in these stocks as well, the best place to find them is David Fish’s Dividend Champions, Contenders, and Challengers list.

What I regularly do is look over Mr. Fish’s list for high-quality candidates that appear to be priced less than they’re worth.

This allows me to reduce my risk while also increasing my yield (price and yield are inversely correlated, all else equal).

And, over the long haul, my potential total return is also higher.

Well, what recently happened is that I found a high-quality dividend growth stock that seems to be significantly undervalued right now.

In fact, I recently added to my stake after taking advantage of some tax-loss harvesting.

This could be a huge opportunity…

This might not be a household name, but they don’t need to be to excel over the long term.

National Oilwell Varco operates a similar business model to that of those that provided picks and shovels during the California Gold Rush.

While miners went out to stake their claim and take on a lot of risk, seeing what they could dig up, the suppliers made money either way. Their bets were extremely hedged.

And that’s kind of how National Oilwell Varco works. The major players in the O&G industry take on the risk, but they have to buy the supplies either way just to get started. And that’s a big reason why National Oilwell Varco’s results have been so fantastic over the last decade, even while some supermajors and other big players in the space have generated results that have wildly oscillated.

While the industry is volatile, National Oilwell Varco has been around for more than 100 years – their corporate history dates back to the beginnings of the oil industry. So they’ve exhibited extreme staying power.

They basically provide the O&G industry with almost everything it needs to do business, operating as a veritable “one-stop shop”. They provide products and services ranging from rigs to downhole tools to drilling fluids.

And the versatile and necessary nature of the business model has in part allowed the company to build up an impressive dividend growth foundation in short time.

While they’ve only increased their dividend for the past six consecutive years, that’s simply due to the fact that the company only recently initiated a dividend rather than their inability to pay and grow one.

However, the dividend growth rate is nothing less than phenomenal – over the last five years, the firm has increased its dividend at an annual rate of 78.2%.

Now, that extreme dividend growth rate is mostly present because of the recent initiation of the dividend, resulting in the increase of the payout ratio from 0% to its current 40.8%.

That’s still a fairly low payout ratio, so one would expect that dividend growth will likely remain strong for the foreseeable future, absent a complete collapse in profit.

But what’s so unusual about this stock is that the huge dividend growth rate is applied on top of a sky-high yield of 4.72%.

Notably, that’s about four times higher than the five-year average yield of 1.1% for this stock.

With a yield that high, investors would probably be happy with mid-single-digit dividend growth, but you’re instead getting dividend growth that has recently averaged much, much higher.

The company’s underlying results over the last decade have been excellent. Not only in terms of absolute and relative growth, but also in terms of lack of volatility even while the industry has been all over the place.

Again, wow. In addition, the growth (both across the top line and bottom line) was fairly secular over the last 10 years, with few bumps along the way.

It should be noted, however, that the company’s growth was largely helped by a flurry of acquisitions over this period, and it seems somewhat unlikely that will persist on and on.

S&P Capital IQ actually believes EPS will grow at a -18% compound annual rate over the next three years due to broad difficulties in the industry, a shrinking backlog, and potential contract cancellations.

However, even with a short-term hit to earnings, the long-term picture seems to be bright. And that relatively low payout ratio offers some breathing room in regards to dividend affordability.

One other aspect that should give investors some peace of mind during a turbulent time in the industry is the company’s stellar balance sheet.

The long-term debt/equity ratio is 0.15 and the interest coverage ratio is over 34.

These are fantastic numbers, meaning that National Oilwell Varco is extremely financially flexible right now. It might even make sense to take on some cheap debt to scoop up a few cheap acquisitions.

In addition, the company’s profitability is really solid. Over the last five years, the firm has averaged net margin of 12.28% and return on equity of 11.40%. Not the highest in the industry, but impressive, nonetheless, in both absolute and relative terms.

All in all, I think there’s just a ton to like here. The company is no doubt facing some difficulties right now with the backlog shrinking and recent results showing rather substantial drops in revenue and profit, but this is a company that has been a strong performer over the long haul. If there’s any company in the O&G industry that has showed an ability to work through the volatility, it’s this one.

With all the difficulties they’re facing right now, we might expect a cheap stock. Is it cheap?

The P/E ratio for NOV is just 8.65. There’s something to be said for the cyclical nature of the industry, but the five-year average P/E ratio is 14.1. Moreover, the company’s stock is well below book value, which, outside of the financial crisis, doesn’t happen. And as mentioned earlier, the current yield is way, way higher than its recent historical average.

Looks like it’s quite undervalued. But what’s a good price to pay? What’s the stock reasonably worth?

I valued shares using a dividend discount model analysis with a 10% discount rate and a 7% long-term dividend growth rate. This seems like a modest assumption considering the moderate payout ratio, long-term track record, and strength/diversification of the business. That growth may slow down over the near term, but I think that’s a solid expectation for the long haul. The DDM analysis gives me a fair value of $65.63.

I truly believe this stock is very cheap here, but my opinion is just one of many. I like to compare my analysis with that of some professionals that have taken the time to look at a stock and value it. This adds value and perspective.

Morningstar doesn’t have a star rating on NOV right now, but their fair value estimate is $48.00.

I came in high, but I’ve refrained from assuming that near-term challenges will persist forever. Looking out over the long haul, I think my expectations are pretty modest. But averaging out the three figures gives us $52.88. I think that’s a reasonable conclusion, which would mean this stock is potentially 34% undervalued right now. 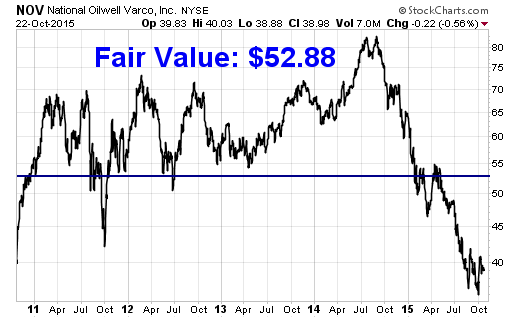 Bottom line: National Oilwell Varco, Inc. (NOV) business of selling supplies to the major players in the O&G industry has been working well since the late 1800s, and I see no reason the company won’t continue to do well moving forward. Short-term challenges have brought about a 45% drop in the stock price over the last 52 weeks, which has provided what appears to be an opportunity to buy a stock with a very high yield on top of the possibility for 34% upside. This could be one of the best opportunities available right now.