Something big is happening in the oil sector…

Each spring and fall, banks re-evaluate how much money they’re willing to lend to oil producers.

Usually, this isn’t a big deal. But oil prices have declined significantly since June 2014… So you would think banks would be cutting back on their lending.

[ad#Google Adsense 336×280-IA]You see, to determine how much money a company can borrow, banks use a “borrowing base.”

It’s simply the value of a borrower’s collateral.

The theory is, if a company doesn’t pay back the money it owes, the bank can take and sell the company’s collateral.

Oil producers’ borrowing bases are largely made up of oil reserves.

So the more valuable a company’s reserves, the more money a bank will loan that company.

For example, when oil prices were rising from their 2009 lows to more than $100 per barrel, oil producers were able to borrow a lot of money because the value of their oil reserves increased.

The inverse is also true. When oil prices fall (like they have recently), oil producers’ reserves become less valuable… their borrowing bases are decreased… and banks scale back the amount of money they’re willing to loan them. And if a company owes a bank more than its new borrowing base, the bank is able to foreclose on the company’s assets.

That’s the situation we should be seeing right now.

Borrowing bases are typically re-calculated every six months – usually in April and October. Since the average oil price was $93 per barrel last year, the spring re-calculation didn’t have much effect on borrowing bases.

Today, oil is less than $50 per barrel… and 60% below its June 2014 high. This dramatically reduces the value of producers’ reserves. So lenders should be slashing oil producers’ borrowing bases.

However, according to energy industry publisher Hart Energy, the borrowing bases of exploration and production companies (oil producers that aren’t the majors) that have reported are only down 1% to 2% this year.

Operating costs for producers have fallen as much as 25% since last year. This strengthens borrowing bases… but the fall in oil prices dwarfs these savings.

A large reason banks aren’t re-calculating oil producers’ borrowing bases is likely because they don’t want to foreclose on and operate oil wells. They’re also likely hoping oil prices will recover. After all, that’s what happened the last time we saw a big oil price drop. 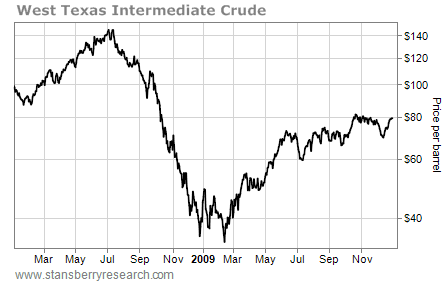 It was a serious fall. But the price of oil resumed its move higher shortly after the Fed began its quantitative easing program in late 2008. And by June 2009, the oil price was back up to $70.

Today’s situation is different. We have yet to see any sort of price spike. 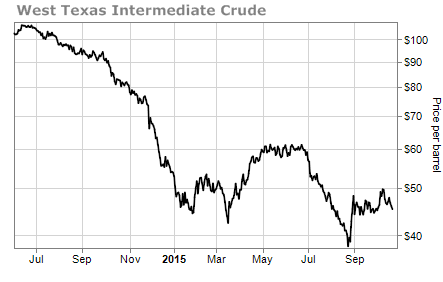 With no oil rally in sight, banks are going to be forced to re-calculate borrowing bases significantly lower early next year.

This will cause many oil producers’ to sell their assets to strengthen their borrowing bases, or banks to foreclose on assets. Either of these moves will adversely affect oil producers’ share prices.

So my advice on oil producers remains the same: stay cautious.