The market continues to meander about for 2015 as the major indices are all near flat line as we head towards year-end.

The economy continues to muddle along in what continues to be the weakest post-war recovery on record with GDP growth of approximately half of the average of its nine predecessors.

Average median income is actually down from where it was when the recession officially ended in June 2009 and the labor participation rate is at its lowest levels since the late 70s.

It is very hard to get a handle on the direction of the domestic economy from month to month.

Once again we saw poor economic activity in the first quarter with less than one percent GDP growth.

That reversed in the second quarter with robust growth of almost four percent. Unfortunately, that strength was unsustainable. Third quarter GDP growth forecasts have been slashed over the past couple of weeks with the consensus now expecting 1.5% to two percent GDP growth in third quarter, some pundits are predicting less than one percent growth.

Despite the anemic performance of the economy since the end of the financial crisis, the stock market has performed quite well over the past six years.

Some of this was a predictable bounce off way oversold levels as the S&P 500 got under 700 in March of 2009. In addition, the Federal Reserve has quintupled their balance sheet and have kept interest rates basically at zero for more than six years now. How much of the rise of equities and real estate was a result of the central bank’s actions is certainly open to debate, but obviously it has been a key driver of the bull market that has been in place since 2009.

In addition, companies have refinanced their debt at record low levels and bought back record amounts of stock which has boosted earnings nicely over the past few years despite a very challenging global backdrop. Firms have also cut costs through layoffs, industry consolidation, and other operational efficiencies. Margins at the companies in the S&P 500 are at/near all-time highs.

I think we are near the end of the measures companies can take to boost earnings without seeing an uptick of demand. This is starting to show up in recent earnings reports.

Overall earnings should be down year-over-year for both the second and third quarters of this year when this earnings season is complete. Profits in the first quarter were basically flat.

Recent events in the credit and equity markets are not encouraging. Spreads between high yield bonds and treasuries have expanded recently and quite a few IPOs have been pulled at the last minute due to volatility and lack of demand.

There is just not much more to cut and margins are more likely to go down and not up in the quarters and years ahead. One needs look not much farther than Walmart (NYSE: WMT) to see just what a tiny adjustment can have on margins and earnings. The giant retailer recently surprised the street due to the impacts it will have by raising pay for a good portion of its associates by $1.00 an hour. This caused the company to have lower guidance and the stock was crushed as a result.

It is very important that investors concentrate their holdings in companies that have pristine balance sheets, robust margins and generate impressive cash flow going forward. Let’s take a look at two giant drug concerns to demonstrate the difference of a stock that should be in a growth portfolio and one I would be very weary of right now. 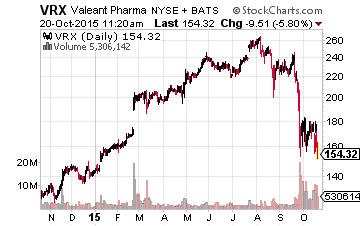 Valeant’s business model is to take on debt, make serial acquisitions, cut R&D spending at acquired companies while raising prices within the drug portfolio it purchases.

Up until now it has been a successful strategy for impressively growing earnings.

Unfortunately, this has invited the inevitable backlash. The company has recently found itself a political piñata in front of the upcoming election and received two federal subpoenas for data around its drug pricing last week.

Its ability to raise prices should be curtailed making its large debt load more challenging to service. The yields on Valeant’s bonds outstanding predictably have gone up significantly recently. 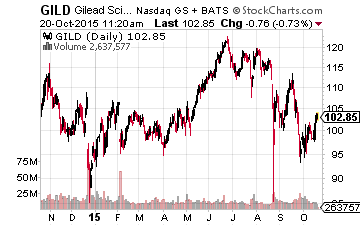 In contrast, Gilead has not done a major acquisition since 2011 and the price per subscription for its blockbuster hepatitis C drugs Sovaldi and Harvoni continues to fall as it gives volume discounts and rolls out these products worldwide.

The company should still see some $15 billion in annual revenues just from these compounds and continues to be the market leader in the HIV space as well.

It continues to sport gross margins north of 80%.

In addition, the company’s balance sheet is pristine with no net debt. Gilead also invests heavily in R&D with several dozen products in development.

Over the next five years, the company should throw off $50 billion to $70 billion in free cash flow. Gilead initiated its first dividend this year and I expect that payout to grow substantially over the years. The company also has a $15 billion stock buyback program in place.

Most importantly, this approach has not hampered earnings growth. Gilead posted profits of around $2.00 a share in FY2013. This year, earnings should come in at just under $12.00 a share. The stock sells for less than nine times those profits. Valeant sells for more than 50 times trailing earnings. I will give you one guess which of these stocks is a major position in my portfolio.