I love to uncover high-quality dividend growth stocks that are undervalued.

Now, I invest in high-quality dividend growth stocks because, to me, it’s a no-brainer proposition.

After all, by their very structure, dividend growth stocks pay dividends to shareholders. Not only that, but these stocks routinely increase their dividends, meaning shareholders’ income is consistently rising year in and year out.

And if you owned a business outright, wouldn’t you want cash flow?

Wouldn’t you expect a paycheck?

It’s no different if you own a small piece.

Whether you own an entire company or just a small slice of it, you should still receive your rightful portion of the profit the company generates.

Companies that are so successful that they’re able to generate the increasing profit year in and year out necessary to fund those growing dividends are obviously very attractive investment candidates.

But while it’s a great idea to invest in a wonderful company that routinely increases its profit and sends out larger and larger dividend checks to shareholders, it’s not a great idea to pay any price for equity.

Just like a Chevrolet Corvette might be a great sports car that offers an exhilarating driving experience, it’s also not worth any price. A great value at $50,000. A poor purchase at $150,000.

I’m always interested in trying to get those “great values”.

Just like buying a Corvette at $150,000 would be, effectively, wasting about $100,000, paying too much for a high-quality stock ends up also being a waste of money.

On the other hand, what if you were to find yourself in a position where that same Corvette were available for $40,000?

You just bought in with a huge margin of safety.

Even if something were to go wrong with the car – the air conditioning compressor breaks or a tire blows out on you – you bought in so cheap that you’ve built in a margin of safety that means you still likely come out ahead.

That’s a big reason why I love to find high-quality dividend growth stocks that are undervalued.

But while you might just intuitively know that a new Corvette at $40,000 is a steal, it’s a bit more difficult to discern value when it comes to stocks.

And I think that’s just because many people aren’t used to it. We’re used to buying everyday stuff like food, clothing, electronics, etc. We’re constantly valuing that merchandise on an ongoing basis.

However, the great thing about stocks is that you can rely on hard data to form a reasonable conclusion.

Again, stocks represent slivers of ownership in real businesses. And real businesses produce real revenue, profit, and cash flow. You can use this data to your advantage.

In addition, today’s technology makes it easy to track stocks over long periods of time, which allows one to see what investors are usually paying for a stock. One can then compare that historical valuation to the current valuation and make some assumptions about that.

A system that does just that is one discussed by Dave Van Knapp right here at the site, and it’s definitely worth a look if you’re at all unfamiliar with how to go about valuing stocks.

What I like to do is scan through David Fish’s Dividend Champions, Contenders and Challengers list, on the prowl for undervalued specimens.

Mr. Fish’s list is the ultimate resource for a dividend growth investor like myself because it includes valuable information on all 700+ US-listed stocks that have increased their dividends for at least the last five consecutive years.

So if you’re looking to whittle down your stock choices from the thousands that are publicly traded into just those that regularly pay and routinely increase dividends, the list above is the best I’ve found.

By the way, I don’t just talk the talk. I don’t just write about these stocks. I invest my actual hard-earned cash into these stocks, as you can see by looking at my real-life portfolio. It’s this portfolio that should generate enough growing dividend income for me to live off of by the time I’m 40 years old.

During one of my recent “perusals” of Mr. Fish’s list while on the hunt for an undervalued dividend growth stock that’s also high quality, I came across a name that I think is really intriguing.

The stock looks significantly undervalued here even though the quality is quite high. Meanwhile, the yield is twice that of the broader market, which all combines for pretty appealing long-term total return prospects.

What stock is it?

The Canadian banking industry is a really interesting industry in the sense that there’s much less competition compared to what we have here in the US. In addition, regulation is tighter and lending standards are stricter. This leads to potentially less risk for investors. With 63% of their revenue derived from Canada, this bank, even while global, is highly tied to its home market.

Meanwhile, the yields at the big Canadian banks are much higher than what investors have access to at the leading domestic banks.

That’s more than twice the yield of the broader market. In addition, it’s about 40 basis points higher than the five-year average yield of 3.8% for the stock. In the low-rate environment we’re in, a yield of over 4% is very appealing.

In terms of dividend pedigree, it’s tough to ignore the Canadian Banks.

Royal Bank of Canada has paid a dividend since the late 1800s, even though the dividend growth streak of five consecutive years is short due to the bank keeping their dividend static during the financial crisis.

However, this is a pretty solid result considering that many banks cut their dividends during the financial crisis. Royal Bank, meanwhile, kept paying that hefty dividend straight through.

But a five-year dividend growth rate of 8.3% is really quite high when considering the yield is also high. If every stock I invested in offered a yield of well over 4% and a growth rate in the upper single digits, I’d be a pretty happy camper!

And with a payout ratio of just 46.5%, there’s still plenty of room for Royal Bank to continue growing their dividend for the foreseeable future.

What that payout ratio means is that the bank is sending out less than half its profit back to shareholders in the form of a dividend, keeping the other 53.5% of profit to reinvest back into the business. That’s an enviable mix.

So there’s a lot to like with the dividend metrics. You have a very comfortable payout ratio, lengthy track record of paying dividends, a very high yield, and outstanding resolve considering this is a major financial institution that was under pressure during the financial crisis.

We’ll next take a look at underlying revenue and profit growth over the last decade. If a business isn’t growing, it’s tough to find a reason to invest. And a growing dividend isn’t funded out of thin air. A company needs to increase profit over time if shareholders are to expect a bigger check. The underlying growth will also help us value the business, as we’ll see a little later.

I view these results as rather impressive, especially in light of the time frame used. These results would be very solid for any business during any period of time, but are absolutely fantastic for a bank operating during a time frame where major financial institutions were going bankrupt.

S&P Capital IQ believes that the bank will be able to compound its EPS by an annual rate of 3% over the next three years, but this appears to be a very conservative outlook.

Looking at their balance sheet, we can see further evidence of quality.

The long-term debt/equity ratio is 0.15. Gross impaired loans as a percentage of loans and acceptances came in at just 0.44% last fiscal year, the lowest of the last three years. And the bank sports AA-/Aa3 credit ratings, which are investment grade.

Profitability is very competitive, among the best of all major Canadian banks. Over the last five years, the bank has averaged return on equity of 18.57% and net interest margin of 1.89%.

And while risks like exposure to the oil & gas industry and Canadian housing market are worrisome, the bank’s recent results show no signs of major concern. And with aforementioned stricter lending practices in Canada, the odds of major write-offs on Canadian mortgages appears to be fairly low.

All in all, an investment in Royal Bank is pretty attractive. You’re getting an outsized dividend that has roots dating back more than a century. And growth has been nothing short of stellar over the last decade, even in the face of global economic meltdowns. If Royal Bank can prosper through that, it seems to be a realistic that they can continue to prosper through future setbacks.

The P/E ratio on RY is 11.30 right now (looking at the NYSE stock). That’s low in absolute terms and also low in comparison to the P/E ratio of 13.6 this stock has averaged over the last five years. And as I pointed out earlier, the yield is quite a bit higher than it has usually been over the last five years. The price-to-book ratio is also more than 15% lower than the five-year average.

Could have a deal on our hands, but what’s the stock worth? What’s the intrinsic value?

I valued shares using a dividend discount model analysis with a 10% discount rate and a 6% long-term dividend growth rate. That dividend growth rate is well below the rate at which the dividend has grown over the last five years, but I’m factoring in the possibility for more modest growth moving forward due to some lingering headwinds. The DDM analysis gives me a fair value of $62.54.

I think the stock is a deal right now. Solid yield, solid operations, and a price that’s below what it’s really worth. However, a couple professional analysis firms have also taken an in-depth look at the bank and come to their own conclusions regarding the value.

Morningstar rates RY as a 3-star stock, with a fair value estimate of $64.00.

I came in the most conservative, but the stock appears to be priced well below its intrinsic value, regardless. Averaging out the three numbers so as to smooth out the results gives us $64.11. That would infer that this stock is quite possibly 12% undervalued right now. 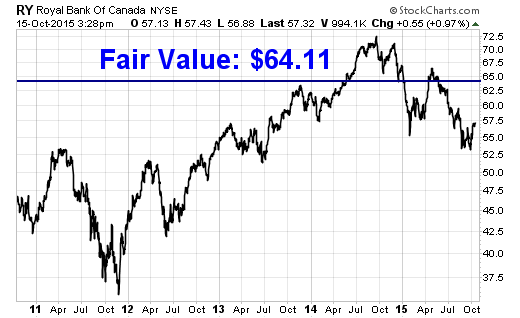 Bottom line: Royal Bank of Canada (RY) is a high-quality Canadian bank that has one of the lengthiest track records around for paying dividends. Its operations are stable, the growth is really impressive, and the yield is much higher than the average over the last five years. Moreover, there’s the potential for 12% upside. A fairly sizable margin of safety appears to be present. I’d strongly consider this stock right now.