The smacker this week goes out to all those folks who seem to have more money than sense, especially when it comes to city real estate. I am amazed at what people will pay to live in some places.

It is the hottest market in the U.S. right now.

The median home value is around $1.1 million, and prices are expected to climb another 5.2% this year.

Okay, it is a really hot market, but – just as in all hot or overheated markets – some buyers just can’t help themselves. 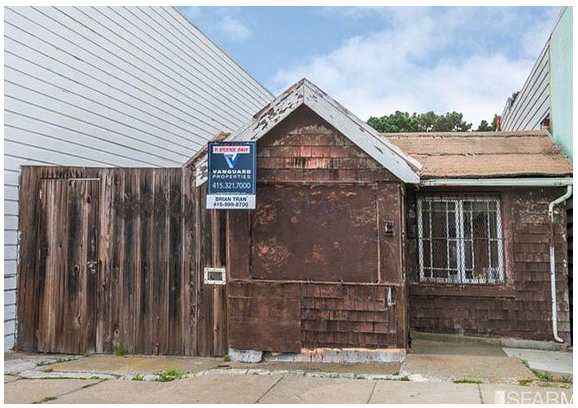 This nightmare is about the same size as a hotel suite: about 750 square feet. It was described in the listing as a distinguished home in need of work.

This thing isn’t in need of work; it needs a fire or a bulldozer.

Even the listing agent described it as an “above and beyond distressed home.”

As you can see, it is wedged between two larger houses. But, what you can’t see is that it backs up to an eight-lane freeway and a set of train tracks that has commuter trains running from 5 a.m. to 2 a.m.

I once rented a place for a few months while I was shopping for a home in Florida. It was several blocks from a set of tracks and it sounded like the trains were coming right through the bedroom at night.

And this place backs up to the tracks and an eight-lane freeway.

But, the ad lists its positives as being just a few steps from a 7-Eleven and an eight-minute bike ride to the BART station, the local subway.

And, of course, you’re waiting for the punchline, right? How much?

Well, first, it was on the market for only 10 days. It had four all-cash offers. And, according to the agent quoted in the story, the buyer is very happy…

I’m sorry, but this is just too nuts for me. Some people should have their wallets and checkbooks taken from them.

Please, folks, use your head when making a big investment. Just because it’s a “hot buy” or in a “hot market” doesn’t mean it makes all that much sense.