Big gold miners, like Barrick Gold (ABX) and Newmont Mining (NEM), are up double digits over the past month.

It’s a safer, more diversified way to invest in the gold-mining business.

And if gold prices continue to rise, this company is going to soar…

Instead, it finances lots of early stage mining projects, then earns revenue streams (called royalties) on mine production if things work out.

Franco-Nevada collects royalties from several resources, not just gold. So the company is profitable even if one of its resources underperforms.

That’s why Franco-Nevada has continued to perform strongly even with gold prices down nearly 40% since their August 2011 peak. You can see this in the table below…

As I said, Franco-Nevada has been able to maintain its level of revenue because it collects royalties from several resources. But its revenue has also remained high because the companies it has invested in have increased production.

But this doesn’t tell the whole story. In the third quarter of 2011, Franco-Nevada had 23 advanced assets (assets that are close to production). The company estimates that these investments could generate revenue within five years. Today, it has 41 advanced assets. So the company’s future is bright.

Franco-Nevada’s earnings before interest, taxes, depreciation, and amortization (EBITDA) and cash from operations both declined from 2011 – mainly due to the lower gold price.

Even so, Franco-Nevada still generated $0.73 of EBITDA for every dollar of sales (its EBITDA margin). This is solid. For comparison, Apple’s EBITDA margin is just less than $0.35.

This profitability has allowed the company to keep its debt at zero and increase its cash balance by nearly $240 million since gold’s peak.

It has also helped Franco-Nevada’s shares to outperform other gold producers’. As you can see in the chart below, while the Market Vectors Gold Miners Fund (GDX), which holds a basket of gold-mining stocks, is down nearly 75% since August 2011, Franco-Nevada is up about 20%. 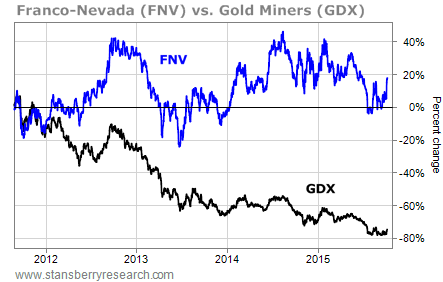 In short, the company has allowed investors to participate in the gold sector with far less risk than traditional gold producers… and just as much upside.

Shares are up around 14% over the past month. But if gold prices continue to rise, they’ll head much higher. And if gold prices stay low for a while, the company should continue to outperform traditional gold miners. It also pays a nearly 2% dividend yield.

I recommend looking into Franco-Nevada today.