It has been an ugly few months for investors. The just closed third quarter saw the biggest equity losses in some four years, and all major indices saw significant damage during the quarter.

High beta sectors of the market fared even worse with small caps, emerging markets, and energy and commodity stocks getting battered. Even the biotech sector which has been one of the strongest leaders of the market for more than a year slipped into official bear market territory near the end of September.

These challenges extend to commodity based countries such as Brazil which saw its sovereign debt downgraded to junk last month and is deep in the throes of stagflation.

Something our country has luckily not experienced since the bad old days of the late 70s.

Almost every deep decline in the market has been preceded by a credit event including the recent financial crisis, Mexico in 94, the Asian crisis of 97, the Russian default of 98 and of course the Greece scare in 2010 and 2011.

The markets are at an inflection point and it is hard to tell which way they will go for the rest of the year. On the one hand, Q2 GDP growth clocked in at a robust t. However, that level of growth is unlikely to be sustained. Given recent domestic economic readings, I would not be surprised if GDP growth comes in at half those levels when the initial third quarter GDP report comes out late this month.

I have my own portfolio on a cautious stance until markets provide clarity on their direction for the rest of 2015. New money that I am deploying into equities on further dips is concentrated in companies that have three core traits.

Here are a couple of well-known names that meet these criteria. 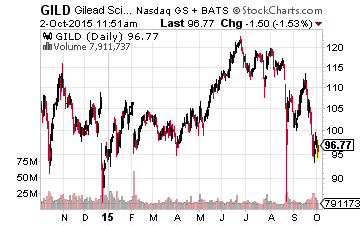 Gilead Sciences (NASDAQ: GILD) is at the top of this list after its stock has come down some $25.00 a share from recent highs.

The company has a great balance sheet and should throw off some $50 billion to $70 billion in free cash flow over the next five years primarily due to the blockbuster success of its hepatitis C drugs Sovaldi and Harvoni, which did nearly $5 billion of global sales last quarter.

Some of this cash flow will be used to fulfill its current $15 billion stock buyback authorization as well as pay its current dividend of 1.7%.

That leaves a lot of cheddar to make strategic acquisitions and/or lift its dividend payout substantially. I expect the company to do both in coming years. Gilead made just over $8.00 a share in profits last year and looks like it will post profits of between $11.50 and $12.00 a share this year. The stock is absurdly cheap at just over eight times this year’s profits. 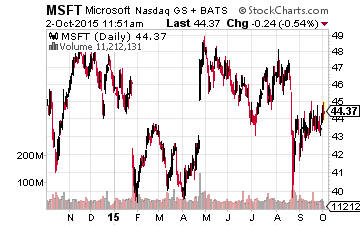 The company launched Windows 10 over the summer and is seeing huge growth from its two cloud businesses, Office 365 and Azure.

In addition, the company sports one of the few triple AAA rated balance sheets in the S&P 500.

The company also announced that it was raising its dividend payout more than 15% in mid-September. After the increase, the stock will yield 3.3%. This is substantially above the 10 year treasury yield and in the ballpark of some utility stocks. Earnings are growing approximately 10% annually. Taking the company’s huge cash hoard out of the equation, the shares are not expensive at 13 times forward earnings. 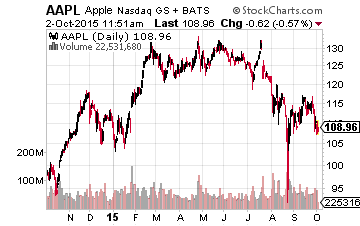 It is hard to have a discussion about large cap stocks with attractive valuations, solid growth, and pristine balance sheets without giving a shout to Apple (NASDAQ: AAPL).

The shares are down some 20% from recent highs, mainly on concerns around the growth of China despite the CEO stating the company is seeing solid demand from the Middle Kingdom.

Apple can’t seem to give back its cash fast enough to shareholders. It will have returned more than $50 billion to shareholders in the form of dividends and stock buybacks and dividend payouts in both 2014 & 2015 and yet will have over $150 billion on its balance sheet by yearend.

The iPhone 6 continues to shatter all previous records for smartphone sales and just came out with its “S” version. Equating for cash, the shares are dirt cheap at under nine times forward earnings and pays nearly a two percent yield to boot.

Until we get some confidence that the recent hiccup in the market is over, these cash flow machines are a good place to deploy “dry powder” into on any additional dips in the market.