The simplest advice today is: Don’t risk a small loss becoming a big one. Don’t fight the trend.

Could stocks go much higher from here? Sure.

In fact, I actually believe that they will. But that’s a dangerous bet to make today…

And “Markets can remain irrational longer than you can remain solvent,” famed economist (and speculator) John Maynard Keynes said.

The reality is, right now, most of the world’s financial assets are in downtrends. And downtrends can continue, losing you more money.

Over the last year, you could have tried to call the bottom of many of these falling assets… and you would have gotten crushed…

Let’s start with the Australian dollar.

The Aussie dollar has lost a quarter of its value since last summer. That is crazy for a developed country’s currency. Take a look: 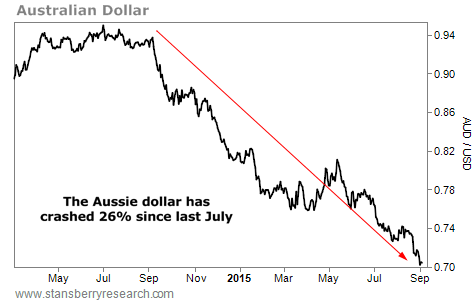 By any measure, the Aussie dollar is cheap… oversold… and hated. Traders have placed near-record bets against it (based on futures contracts). These things are classic signs of a bottom in the Aussie dollar.

The thing is, you could have said the same thing about the Aussie dollar earlier this year – and yet it’s hitting new lows today. If you had bet on a higher Aussie dollar then and held until now, you would have lost real money.

The message from the Aussie dollar is simple: Don’t fight the trend.

Oil has been a similar story…

Investors have tried over and over again to make bets on higher oil prices and higher share prices for energy companies. They have tried to pick the bottom.

They have failed. The downtrend has been too overwhelming. The price of oil is down 58% since last summer. Take a look: 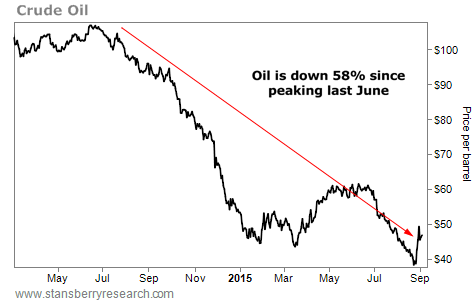 Recently, oil has had a powerful spike off of its bottom. But as I write, it is giving back those gains.

Most importantly, the long-term trend has been down since last summer. Rogers and Keynes had it right – markets often fall lower than you can possibly imagine.

China is another example…

After soaring 145%, Chinese stocks are down 44% since peaking in the summer. Take a look: 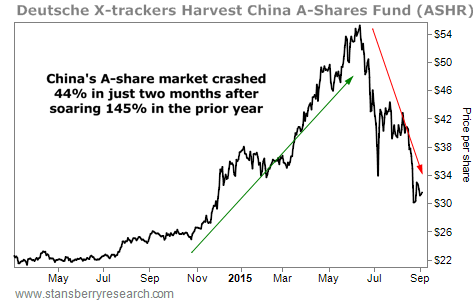 Fortunately, my readers and I didn’t fight the trend here. We followed our trailing stops and got out…

In my True Wealth newsletter, we sold half of our Chinese stock-fund position when we were up 100% and we sold the rest when we hit our trailing stop – netting an 80%-plus gain. Following our stops was exactly the right thing to do.

The lesson from China is clear as well: Don’t fight the trend.

Are you seeing a pattern here?

Most of the world’s financial assets are in downtrends… I still believe our upside is enormous in stocks around the globe. But today’s message is simple…