Conversely, when oil trends lower to $40/barrel from $100/barrel, $20/barrel oil looms in the near future.

Yet as the chart below revels, extrapolation is useless. 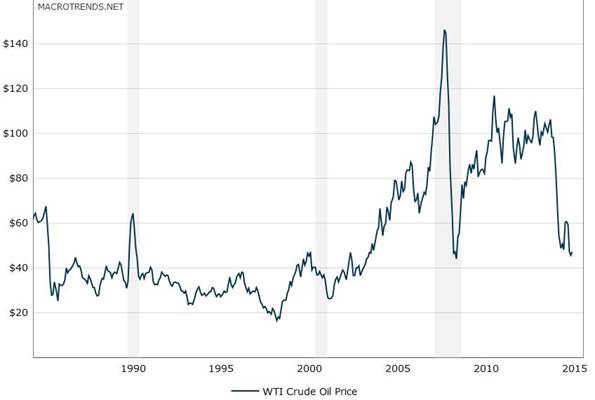 [ad#Google Adsense 336×280-IA]As you’d expect, the best values are found when everyone extrapolates to the downside, like today.

The best values – the best income value, in particular – are found in oil’s biggest players.

But neither oil giant is in danger of a dividend cut. In fact, Exxon Mobil even raised its dividend 6% with the June payout. Despite oil prices at a six-year low, Exxon Mobil still generated $3.9 billion of free cash flow for the latest quarter. This was more than enough to cover the $3.1 billion paid in dividends.

A low debt load, an efficient operation, and copious borrowing capacity ensures Exxon Mobil can maintain its dividend in all but the most extreme markets.

Chevron offers a more attractive yield than Exxon Mobil, but it comes tethered to more risk. Chevron has spent prodigiously to boost sales and earnings. This includes $54 billion on a liquefied-natural-gas plant in Australia. The investment has yet to contribute to earnings.

As for earnings, Chevron’s earnings cover the dividend, but free cash flow doesn’t. The good news is that this dynamic is expected to change by 2017, when recent investments begin generating significant earnings and cash flow. In the meantime, Chevron has sufficient borrowing capacity and CAPEX flexibility to sustain the dividend.

Investors willing to venture farther out on the risk curve can capture even more income and yield with European oil giants Royal Dutch Shell (NYSE: RDS.a) and BP (NYSE: BP). Both yield over 7%. Shell shares yield 7.3%; BP shares yield 7.5%. Shell and BP shares (ADRs, technically) are down 35% and 33%, respectively.

Shell shares have been weighed down by lower oil prices (like everyone else) and concerns its impending acquisition of large British natural-gas company BG Group won’t come to fruition. As for the latter issue, Shell has assured investors that the BG deal will come to fruition.

At the same time, Shell CEO Ben van Beurden has assured investors that Shell is committed to its dividend. Van Beurden went so far as to call Shell’s current yield “outrageous,” and history supports the claim. Shell hasn’t reduced the dividend since 1945. The payout has stood for 70 years, whether oil fetched $140 or $10 a barrel.

As for BP, it’s the riskiest of the quartet, but also the highest yielding. This is understandable; BP’s cash flow fails to cover the immediate dividend. That said, the oil company dividend is sustainable.

BP is liquid: It has cash and short-term investments of $33 billion on its balance sheet. It also has the option to continue to reduce CAPEX and slash expenses. BP expects CAPEX to fall below $20 billion for 2015. BP also continues to divest assets low-return assets. During the first half of 2015, BP agreed to sell $7.4 billion of assets under its $10 billion divestment program. Bob Dudley, BP chief executive, says savings of 20% to 30% are being achieved. BP’s current financial standing point to dividend sustainability.

Of course, there are no guarantees, except for the guarantee that all four oil giants will move heaven and earth to sustain their dividends. None of the four wants to suffer the ignominy of announcing a dividend cut. History suggests they won’t have to.