The great Benjamin Graham is famous for (among many other things) referring to the stock market as “Mr. Market”.

Why is this important?

We’ll get into that in a moment, but keep in mind that Graham’s insights are invaluable.

This is the man, after all, who taught Warren Buffett a great deal. Graham served as Buffett’s professor at Columbia University before later hiring Buffett to work with him at his investment partnership.

[ad#Google Adsense 336×280-IA]So if you think Buffett is incredibly smart, just imagine what we can learn from the man who taught Buffett.

Graham personified the market as someone who offered stocks for sale.

And Mr. Market was a moody fellow who alternated between euphoric and depressed moods.

When Mr. Market is feeling euphoric, stocks can be downright expensive.

When Mr. Market is feeling depressed, he’s sometimes willing to unload stocks for far less than they’re worth.

If you’re able to recognize this pattern, it’s something that can be taken advantage of.

You want to buy stocks when Mr. Market no longer wants them, willing to sell them for far less than they’re actually worth.

Conversely, you want to refrain from buying stocks when he’s unrealistically and unreasonably optimistic, selling stocks for way more than they’re intrinsically worth.

But how do you know the difference? How to tell if Mr. Market is in a good or bad mood?

Well, developing a system whereby you’re able to estimate a stock’s actual value is a great start. To that end, Dave Van Knapp published a great tutorial on how to do value dividend growth stocks, which is incredibly helpful if you’re unfamiliar with independently valuing stocks.

Once you’re able to do that, you have a huge weapon in your favor. You’re able to use Mr. Market’s moods against him, scoring deals on high-quality assets in the process.

And why wouldn’t you want to buy stocks for less than they’re worth?

This gives you incredible advantages.

First, it allows you a higher yield than what you would have otherwise received had you paid more.

All else equal, a stock’s yield and its price are inversely correlated. A higher yield means more passive dividend income on the same investment amount. That’s more money in your pocket.

Second, it reduces your risk.

Nobody has a crystal ball. Even Buffett is occasionally wrong. But if we’re able to buy a stock for much less than its intrinsically worth, that gives us a margin of safety.

That means even if the company doesn’t perform as expected or something else goes wrong, you’ve got a cushion upfront that allows you to weather the storm without losing a lot of money right off the bat.

Third, your possible total return will be higher.

Simply put, the lower the price you pay, the higher your possible total return will be.

More money while taking on less risk is exactly why you want to take advantage of Mr. Market whenever possible. And it’s something I’ve aimed to do over and over again as I’ve built up my six-figure portfolio in short order, all on a modest day-job income.

What I like to do is look over David Fish’s Dividend Champions, Contenders, and Challengers list for undervalued stocks that are also high quality.

Mr. Fish’s list is incredibly fertile ground for an investor like myself. It contains the names of more than 700 US-listed stocks, all of which have increased their dividends for at least the last five consecutive years.

Not only that, it contains pertinent information like dividend growth rates and payout ratios. An absolute bonanza of information for any investor that likes to buy stocks that not only pay dividends, but also increase those dividends year in and year out.

After all, the only thing better than a dividend is a bigger dividend!

A recent scan of the CCC list brought a stock to my attention that appears significantly undervalued right now.

And I’m going to share that name with you readers today.

Let’s see if we can take advantage of Mr. Market…

Franklin Resources, Inc. (BEN) is is an investment management company that offers asset management services to retail and institutional investors.

Franklin Resources has long taken care of its shareholders via extensive share repurchases and a growing dividend.

For perspective, they’ve increased their dividend for the past 35 consecutive years.

A track record like that doesn’t just develop itself. That record exists purely because Franklin continues to increase profit year after year by providing services that people require. And they provide those services in such a way that allow them and their shareholders to benefit.

Moreover, the dividend isn’t just increasing like clockwork. Franklin continues to hand out massive increases in the dividend amount.

Over the last decade, the company’s dividend has grown at an annual rate of 15.5%.

And then try repeating that for a decade straight. Good luck!

More good news: The dividend appears to be very sustainable here and likely to continue growing thanks to a modest payout ratio of just 16.1%.

That’s a very low payout ratio, indicating that there’s plenty of room for large dividend raises over the foreseeable future, even absent much underlying profit growth.

The one knock against the stock is the low yield. At just 1.51%, there’s something to be desired there for anyone that is interested in current income.

For instance, the company paid out a special dividend of $0.50 in January of this year. That boosts the yield up to 2.78% on an annualized basis using the current stock price.

We can see a lot to like here with the dividend. A very low payout ratio and a penchant for massive dividend raises means shareholders should continue to see big raises for a long time to come.

But what about underlying operations?

Let’s see what kind of growth Franklin has managed over the last decade in terms of revenue and profit. This will give us plenty of information when it comes time to value the business, giving us a good picture both of where the company’s been and perhaps where it’s going.

Much of that excess growth in EPS was fueled by the company’s buyback program which saw the outstanding share count reduced by approximately 20% over the last decade. That’s fairly substantial.

S&P Capital IQ believes the company will see its EPS compound by just an annual rate of 1% over the next three years, thanks to the recent pullback in global equity markets. Since Franklin generates most of its revenue via fees based on the company’s assets under management, a reduction on AUM (due to a smaller asset base on the back of lower-priced stocks) would adversely affect the company’s ability to generate fees and revenue.

We’ll see how this goes. We still don’t know how the market is going to behave tomorrow or the next day. Mr. Market is very moody, remember?

That said, Franklin’s AUM has been steadily declining over the last year. The company recently reported AUM for August’s month end, coming in at $806 billion. That’s down 12.6% from the $922.2 billion the company reported for August 2014’s month end. Not a great trend, but Franklin has weathered worse volatility over its history and kept right on ticking.

One aspect of the company that can certainly help it overcome any temporary volatility is the rock-solid balance sheet. With a long-term debt/equity ratio of 0.19 and an interest coverage ratio north of 72, the firm’s financial flexibility is outrageous.

Profitability is also outstanding. Not quite the best in the business, the metrics here are wonderful in absolute terms. Over the last five years, they’ve averaged net margin of 27.91% and return on equity of 21.89%.

This is a high-quality company across the board. AUM is down, but volatility is up. That will likely reverse itself at some point here.

In the interim, Franklin’s fundamentals are rather excellent across the board.

The stock definitely appears markedly cheap. But what should we actually pay? What’s it worth?

I valued shares using a two-stage dividend discount model analysis with a 10% discount rate. The initial dividend growth rate I used (for the first 10 years) is 15% – in line with their historical average. I then factored in a terminal dividend growth rate of just 8% so as to provide a nice margin of safety. The DDM analysis gives me a fair value of $58.26.

My analysis indicates that this stock is dramatically undervalued, but perhaps I’m way off base. So let’s compare my number with that of some professional stock analysts that have taken the time to analyze and value this stock.

Morningstar rates BEN as a 4-star stock, with a fair value estimate of $50.00.

My valuation came in a bit more enthusiastic, but it does seem that, regardless, Mr. Market is very depressed about this stock and its future prospects. It’s then up to you as to whether you take advantage of that. But averaging out the three numbers gives us $52.09. This stock appears to be 31% undervalued right now. 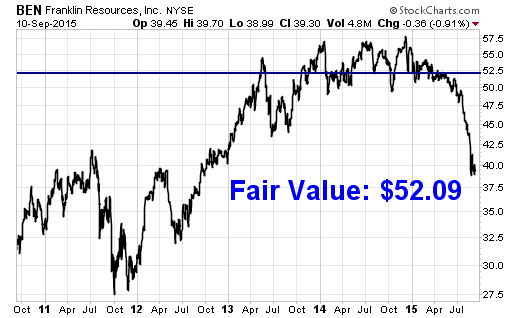 Bottom line: Franklin Resources, Inc. (BEN) is a high-quality asset manager across the board. Its AUM has been hit by volatility and potentially some trends toward passive funds, but the company has operated through far worse market conditions and continued to increase its profit and dividend for shareholders. Mr. Market doesn’t like this stock, allowing for what appears to be 31% upside. I’d strongly consider taking advantage of that.