The first facet of my strategy focuses on providing stability to this high beta sector by recommending 50% to 75% of an investor’s biotech portfolio is allocated to large cap growth at a reasonable price (GARP) stocks.

One advantage large cap biotech growth stocks have over large growth stocks in other sectors is they are less dependent on global demand levels and are less subject to the whims of the currency market given their ultra-high gross margins.

[ad#Google Adsense 336×280-IA]In short, they have little worries due to currency fluctuations and global growth levels than other American multinationals such as McDonalds (NYSE: MCD).

These are the type of stocks that are able to churn out revenue and earnings growth despite the challenging worldwide backdrop to the markets.

Simply put, having 50% to 75% of your biotech portfolio in these large cap growth names takes a lot of the volatility out of investing in this high beta sector.

As an example, small cap biotech stocks are on the verge of their fifth 20% or greater correction since 2009.

While the large cap biotech sector has yet to experience even one decline of that magnitude over that same time frame.

It is a great time to go shopping for these blue chip biotech companies right now. Myriad well known and respected names in this space are down 10% to 15% from where they were in early July before this latest bout of market turbulence hit equities. 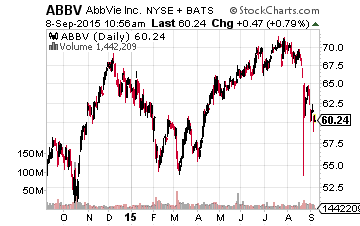 A good place to start is with AbbVie (NYSE:ABBV), maker of Humira, which until this year was the number one drug on the market by global sales.

It looks like the compound will be eclipsed this year by the hepatitis C blockbuster drugs Sovaldi and Harvoni from Gilead Sciences (NASDAQ: GILD).

Humira still should provide some $14 billion or so worth of global revenues in 2015.

Humira will start to come off patent late in 2016 but should not suffer the steep decline other blockbusters have seen after patent expiration as it is a biologic and harder to copy and manufacture.

In addition, AbbVie arguably has the strongest late-stage pipeline in the industry (HCV, oncology, immunology, and neuroscience). The company’s purchase of Pharmacyclics (NASDAQ: PCYC) earlier this year firmly established AbbVie in the hematologic oncology space with that company’s drug Imbruvica. AbbVie has attractive traits for growth, value, and dividend investors.

The shares yield almost 3.5% after the stock has come down from over $70.00 a share to the $60.00 level on the recent downturn in the market. The company is tracking to 30% year-over-year earnings growth this fiscal year and the consensus has it adding another 15% to 20% earnings increase in FY2016. The shares are too cheap at 12 times next year’s likely profits. 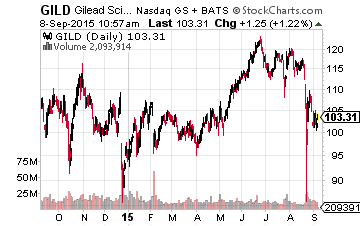 Next up is Gilead Sciences whose Sovaldi and Harvoni for hepatitis C are turning out to be the biggest initial blockbusters of all time based on first year’s revenue.

In its last completed quarter, these two compounds rang up nearly $5 billion in global sales, approximately $700 million over the consensus.

These compounds are also just rolling out in Japan which has some one million citizens infected with hepatitis C.

Gilead should face some increased competition in the hepatitis C space starting early next year from Merck (NYSE:MRK). However, the company should easily remain the market share leader in this very lucrative space. Gilead is also not a one trick pony, the other compounds in its portfolio provide over $3 billion in quarterly sales and are seeing annual revenue increases approximately 10% per annum. This is led by the company’s market leading HIV franchise.

In addition, Gilead has some 40 drugs in different trial stages and a very deep pipeline like AbbVie. The company is becoming a cash flow monster with some $50 billion to $70 billion in free cash flow to be generated over the next five years. The company just initiated its first ever dividend this year and has a $15 billion stock buyback authorization program in place.

The remaining cash flow will most likely be used to raise the dividend in the future as well as strategic acquisitions to foster growth. The stock has come down some $20.00 a share from recent highs to around $100.00 a share. Gilead is dirt cheap priced at under nine times this year’s likely profits and the consensus earnings for FY2016 have consistently been revised up over the past three months. 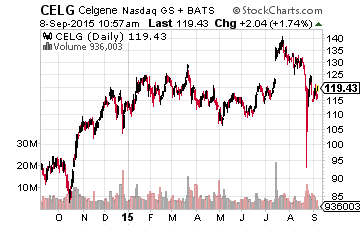 Two other large cap growth stocks I have been adding to in this market correction are Amgen (NASDAQ: AMGN) and Celgene (NASDAQ: CELG), both of which I have covered before in these pages.

The recent market hiccup has caused significant angst among investors as it is the first official correction in the market since 2011.

The global backdrop is definitely concerning at the present time. 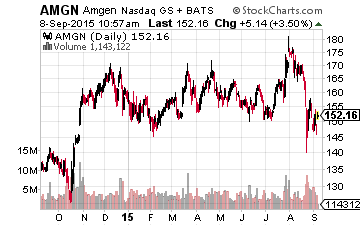 However, long term growth investors should take the drop in equities as an opportunity to pick up some of the large cap growth names mentioned above at a discount.

They are a great foundation for any well-rounded and diversified biotech portfolio.

In our next installment, we will cover some promising names in the small cap space that have substantially more upside potential even if they are more volatile than their larger cap brethren.

I hope to see you there. Happy Hunting.