I think a lot of people mistake them for being one and the same.

But they’re really not.

Price tells you almost nothing. The only information it provides you is how much money you have to pay for something.

It tells you what something is actually worth.

For example, Starbucks charges about $4.00 for a tall version of one of their fancy iced coffee drinks in my neck of the woods.

Now, if they were to charge $1.00, people would line up around the block to buy these drinks because they know that they’d be getting an incredible deal.

Conversely, if Starbucks raised the price to $10.00 overnight, I think all but the most hardcore customer would desert the coffee chain. At that point, the price is too far over what that drink is actually worth.

Most people are able to reasonably estimate value of most things. You know the approximate cost to make that same coffee drink at home, and then add in some markup for the experience and convenience. And $4.00 sounds about right.

Well, the same goes for stocks.

You want to look at value, not price, for your guidance in regards to whether you should be enthusiastic or not when it comes to buying.

There are a lot of systems out there designed to ascertain fair value of stocks. Dave Van Knapp shares his right on the site, and it’s worth a look if you need some help there.

Once you have your system in place, it’s just a matter of using that to your advantage by buying stocks for less than what they’re worth while at the same time avoiding overvalued stocks. You don’t want to be the guy paying $10 for a $4 cup of coffee – needlessly wasting money in the process. You want to look for those $4 cups selling for $1 – scoring an incredible deal and maximizing the use of your money.

I’ve tried to do exactly that over the last five years, scoring many deals on high-quality stocks en route to building my “Freedom Fund“, which is my personal portfolio that will one day generate enough growing dividend income for me to live off of.

And the stocks I typically buy can be found in one place: David Fish’s Dividend Champions, Contenders, and Challengers list.

For someone interested in one day living off of growing dividend income, this is a gold mine of information.

During one of my recent perusals, I ran into a stock that appears to be significantly undervalued. It’s also a stock that happens to find itself in my personal portfolio as well.

Aflac Incorporated (AFL) is engaged in the business of offering supplemental health and life insurance in two major markets: the US and Japan.

You probably know this company by its catchy ads featuring a duck that quacks “Aflac”.

Great advertising aside, this company has been quietly humming along and creating value for shareholders for years and years now.

And a good portion of that value proposition lies in the growing dividend.

The company has increased its dividend for the past 32 consecutive years.

That gets me pretty excited right off the bat. It means through multiple wars, multiple stock market crashes, and the Great Recession, the company kept on pumping ever-growing cash flow shareholders’ way. So if you’re looking for some kind of assurance that growing dividend income will continue, Aflac’s track record is fantastic.

Over the last decade, the dividend has increased at an annual rate of 14.6%.

So that means not only are shareholders collecting more cash year after year, but the size of those increases are well over the rate of inflation, increasing the purchasing power of shareholders. However, Aflac’s recent dividend increases have been more modest – the most recent being only 5.4%.

But what makes Aflac interesting, and potentially more attractive, is that dividend growth of late has been so conservative that the company’s payout ratio has actually been decreasing over the last few years. While most firms I track and invest in have been growing dividends faster than earnings over the last four or five years, Aflac has been doing the opposite.

This has led to a very modest and comfortable payout ratio of 26.2%. So it appears very likely to me that the company’s dividend growth will actually accelerate sooner rather than later. Either way, there’s plenty of room for continued dividend growth for a very long time.

Attractive by itself, it’s also about 15 basis points higher than the five-year average, even accounting for the recent decelerated dividend growth.

We can see the dividend metrics are pretty wonderful. That would naturally lead us to believe that underlying revenue and profit growth must also be really solid. Let’s take a look…

On a per-share basis, profit growth has been rather outstanding. A reduction of more than 10% of the outstanding share count certainly helped propel some of that, but the overall picture here looks great.

S&P Capital IQ is calling for 5% compound annual growth for EPS over the next three years.

I believe the reason for the low expectations is Aflac’s significant exposure to Japan. More than 70% of FY 2014 revenue was generated in Japan, and currency exchange rates between the yen and dollar is affecting Aflac to a large degree right now. Nonetheless, the company’s long-term prospects appear bright.

More evidence of quality is present when looking at the company’s balance sheet. They sport a long-term debt/equity ratio of 0.29 and an interest coverage ratio north of 15. Solid numbers here.

In addition, profitability is quite robust for the industry. Over the last five years, the firm has averaged net margin of 12.98% and return on equity of 17.90%.

Aflac is a really unique and well-positioned company in a niche space. It’s a high-quality business across the board, with the financial wherewithal to continue growing its dividend for years to come.

AFL is available for a P/E ratio of 10.34 right now. That’s about half the broader market, but insurance stocks typically trade for discounts. The five-year average P/E ratio for AFL is 10.4, so we’re looking at roughly equivalent numbers here.

Okay. So what’s the fair value of this stock?

I valued shares using a dividend discount model analysis with a 10% discount rate and a 7.5% long-term dividend growth rate. I think that growth rate is pretty reasonable when looking at the firm’s long-term EPS growth and dividend growth. Recent dividend raises have been modest, but the low payout ratio means dividend growth is likely to rebound strongly. The DDM analysis gives me a fair value of $67.08.

The stock appears undervalued from where I’m standing, but I’m not the only one around looking at this stock…

Morningstar rates AFL as a 3-star stock, with a fair value estimate of $69.00.

Three different numbers, but all indicate undervaluation. Averaging out the three figures so as to narrow the valuation down a bit further gives us $71.09. That would indicate the stock is 20% undervalued right now. 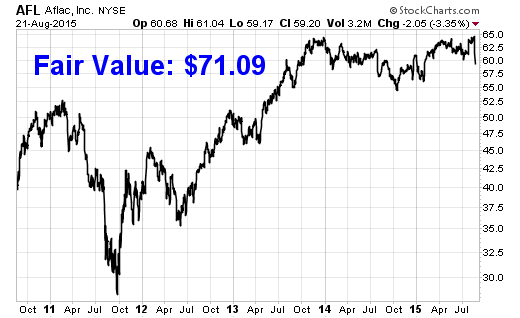 Bottom line: Aflac Incorporated (AFL) is a high-quality niche insurer that has increased its dividend for more than three straight decades. Although currency concerns are real, the company’s long-term growth trajectory is very solid. A low payout ratio and a penchant for rewarding shareholders means future dividend growth could surprise. In addition, the stock appears to offer 20% upside on top of that. This is a strong candidate for a long-term investor looking for a high-quality, undervalued stock in today’s market.