The market is looking weaker and weaker over the past several weeks, and I am starting to take precautions within my own portfolio. The first precautionary measure I am taking is increasing the amount of cash available, or “dry powder,” to make purchases if and when a correction does come.

The second precautionary measure I am taking is waiting for lower prices in the markets. Although some equities have already begun selling off, I believe that lower prices will be available in the near future.

There are many headwinds that the six-year bull market is facing right now, and they are tough hurdles to clear.

[ad#Google Adsense 336×280-IA]Since we have not had a correction in the market in years any trip over one of these hurdles could be the straw that breaks the markets back and sends it into a correction.

If that happens, I will be ready to invest my dry powder into a variety of stocks trading at reasonable valuations with consistent earnings & revenue growth because that is where I believe my money will have the best combination of risk and reward.

While the NASDAQ continues to cling to mid-single digit gains for the year, the S&P 500 is basically flat to where it began the year.

The Dow Jones Industrials are now down more than two percent for the year through last Friday after a streak of seven straight losing sessions, the longest down run in some four years.

The indices have held up fairly well despite overall revenues falling year-over-year so far in 2015 thanks to collapsing oil prices, a strong dollar, and tepid global demand. Overall earnings have managed to stay flat, in a good part to the massive amount of cash companies are using to buy back stock. It would be much better than for the economy and job growth if more of that money found its way into increased business investment such as new plants or equipment. However, given the uncertain outlook of the world economy as well as increasing shareholder activism; it is easy to see why companies are choosing to go this route.

Commodities and commodity stocks continue to be treated like a rented mule by the market. Crude plunged seven percent last week and is at lows not seen since early this year. The Bloomberg Commodity Index was down another 3.4% last week and is now at levels not seen since 2002. Given Chinese exports just plunged eight percent last month and the Federal Reserve looks set to raise rates for the first time since 2006 in September, I don’t see the environment for commodities getting any better in the near term as the rate hike should strengthen the dollar further.

The biotech sector which has been a market leader throughout 2015 is starting to turn over. The main biotech indices are still up over 20% for the year even after giving back five percent late last week during the market decline. However, under the surface most of the sector is already in “correction” territory. Over 80% percent of stocks in the iShares Nasdaq Biotechnology ETF (NASDAQ: IBB) with a market cap of more than $500 million are down more than 10 percent from their 52-week highs.

I warned on these pages back three weeks ago that this high beta sector was overdue for a pullback, perhaps a significant one. Although almost the entire sector in the midst of a decent sell-off, I would be very selective about doing any “bottom fishing” here as this correction feels like it has a ways to go given the huge outperformance of the sector this year in a flat market. 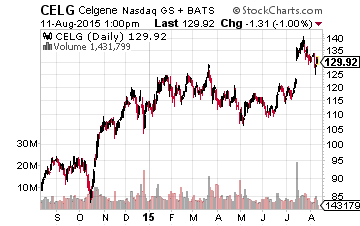 Stick with the large cap growth names in the sector that sport reasonable valuations already.

I would also buy incrementally and slowly if an investor does not already have full positions in these companies like Amgen (NASDAQ: AMGN), Gilead Sciences (NASDAQ: GILD) and Celgene (NASDAQ: CELG).

I believe it is too soon to buy the dip in most of the small cap part of this sector and I would wait for firm confirmation the sector has bottomed before making any significant moves in this area.

The massive amount of merger & acquisition activity this year is becoming disconcerting. This type of activity always seems to peak right near market tops such as in early 2000 and then again in 2007 before the housing bust begat the financial crisis that crushed the market. 2015 is on track to be the biggest year for global M&A by dollar volume in history.

Monday, Warren Buffett announced his biggest purchase in history as he is buying Precision Castparts (NYSE: PCP) for over $37 billion, a better than 20% premium over its previous close. My gut tells me we may look back on this transaction as “ringing the bell” at the top of the market even though I am a huge Warren Buffett fan.

I am also watching the credit markets closely at this point. The spread that bond investors demand over Treasuries has expanded by a full half percentage point from a year ago, the most since 2012, even as the Standard & Poor’s 500 Index has rallied up until the hiccup recently. Since 1996, more than 70 percent of the time spreads widened as much as they have since the first quarter, the S&P 500 has fallen, with the average decline exceeding 10 percent. 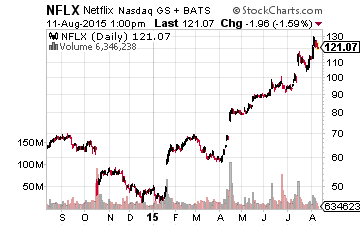 Finally, breadth is weakening as market leaders such as Apple (NASDAQ: AAPL) and Tesla Motors (NASDAQ: TSLA) have started to succumb to selling pressure and these stocks are already significantly into correction territory after their recent sell-offs.

If the few remaining equity leaders such as Netflix (NASDAQ: NFLX) and Amazon (NASDAQ: AMZN), both of which are in nosebleed territory; join them and turn over, it could be lookout below and investors could see their first real substantial decline in the market in many years.

I am erring towards the side of caution here. I have twice my normal allocation in my portfolio in cash.

If we get a sustained pullback, which I think is likely; I will be slowly be deploying some of the “dry powder”. This mainly will go to large cap growth names with consistent earnings & revenue growth selling at reasonable values while mainly avoiding the high beta sectors of the market such as small caps and commodity stocks. It is seemly better to be cautious than greedy at these market levels.

Sponsored Link: I have been warning for many months about what I believe to be an inflection point in the market that is taking place right now. I call it the “Pump and Slump Scandal of 2015″ and it will affect everybody currently invested in the market. What you need to know is that everything could be flipped on its head in the near future. The old blue chip stocks that have been safe haven investments for decades will no longer be able to keep your money out of harm’s way.

The research I have done has led me to a group of stocks I call “Prosperity Growth Leaders.” These stocks have the best growth prospects over the next 3-5 years and are currently trading at reasonable valuations while the market has inflated to out of control levels. These stocks will be the blue chip stocks of the future, and if you are worried about the market like me, click here to learn more about how these stocks can save your portfolio.