[ad#Google Adsense 336×280-IA]And it seems the gold bears dominate the headlines – everywhere you look, each news item seems more negative than the last.

There have been calls for gold to hit $800… and even lower.

But all this negative buzz really belies excellent fundamentals. The truth is, we’re so close to the bottom right now that we’ve got one of the best chances to buy gold we’ve seen in a decade.

A recent survey by Bank of America Merrill Lynch shows a small majority of money managers consider that “gold is undervalued” around $1,155 an ounce.

The survey asked 150 top fund managers worldwide with about $400 billion under management. 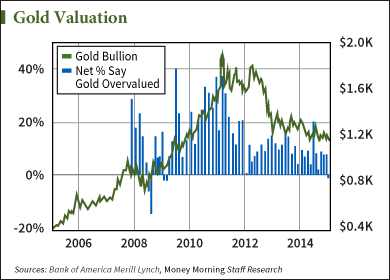 While the bullish majority is just 1% ahead of thebears, the shift itself is nonetheless impressive.

According to Merrill, the last time sentiment was bullish dates back to 2009, just before gold began an impressive two-year 90% run-up.

Interestingly, this sentiment has also begun translating into action, at least for some.

That boosted CI’s position by about $700 million to roughly $735 million in total to become CI’s largest position, representing about 7.5% of CI Investments’ portfolio at the end of the first quarter.

Even Swiss banking giant Credit Suisse added over 4 million shares to its own position, as did Blackrock Group, Morgan Stanley, and Lazard Asset Management, all of whom are multi-asset managers rather than precious metals specialists.

Shorting in futures is no different than in stocks. Those shorting are betting the price will fall.

The speculators segment of futures traders are widely considered to be the “dumb money.” That’s because the positions they hold are often trend-following and typically mark reversal points in the markets when they reach extreme levels.

So we could easily see a repeat of July 2013, when gold surged over the following two months.

The Dollar’s Strength Will Be Temporary 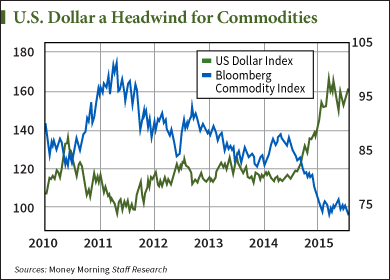 With the U.S. dollar up 21% this year against a basket of major currencies, commodities, including gold, face a significant headwind.

That’s because a stronger dollar means it takes fewer to buy those resources.

Investment research firm FactSet has said the top complaint by U.S. corporations in their Q2 earnings reports was… the strong dollar.

It’s making their products and services expensive to overseas buyers.

The dollar has been climbing since late 2014 on the expectation the Fed will begin raising rates later this year.

At this point, it’s entirely possible that much of that anticipation has already been factored in.

If Yellen does raise rates this year, we could be faced with a “buy the rumor, sell the news” scenario. That could lead to a sell-off in the dollar, which may help gold (along with other commodities) turn higher.

If instead Yellen doesn’t raise rates, the market may decide it’s either not happening for some time or, when it finally does, it’s likely to be in minimal increments over an extended period of time.

It’s no secret that the Fed’s dilemma is it needs to raise rates to make good on its promise, yet higher rates will render government debt servicing all the more challenging and will weigh on profits of U.S. multinationals.

When the market gets a lower dollar and/or realizes rates won’t rise much for some time, the lack of opportunity cost for gold will make it increasingly attractive.

Sentiment Has Nowhere to Go But Up

We all know investors shift their capital with a herd mentality. So, sentiment is a crucial component in markets, as gauging it helps determine their likely future direction.

This makes for a great contrarian indicator. But there’s also the “headline factor,” which is very much against gold right now. Maybe you’ve seen these recently:

Bullish gold headlines are few and far between. This is not how bull markets peak.

The Best Way to Buy Now

All of this points to an historic opportunity right now – to buy gold at prices like this and ride it all the way back up when the secular bull resumes.

Decide how much you feel comfortable committing to gold and then split that into between five and ten equal parts.

Then buy on weakness now and over the next several months.

Money Morning Members can get a $50 deposit when they open a $5,000 EverBank Metals Select Unallocated account. It’s non-FDIC insured, and it’s a way to buy into a pool of gold, sidestepping the annual account or storage fee associated with owing specific coins or bars.

And investors may want to consider picking up shares of SPDR Gold Trust ETF (NYSE Arca: GLD). It’s one of very few ETFs that actually owns physical gold (in this case, in a vault in London) in proportion to the number of shares floated. Owning shares of GLD is in essence owning physical gold. The fund is very liquid and easy to buy.

Buying gold isn’t popular right now, and to buy would be going against the so-called “conventional wisdom.” But the biggest returns often go to the boldest investors.

(It’s all very reminiscent of the major sell-off gold experienced in April 2013. At the time I explained that, when gold futures shed 13% in just two days, it was under what many consider very “questionable circumstances.”)

*We have a formal marketing relationship with EverBank to bring you these benefits. Please take a moment to read our disclaimer.