If Mark Twain were alive today, he’d probably say that there are “lies, damned lies, and inflation statistics.”

There just aren’t many more important numbers that so many depend on and that are so regularly and maliciously manipulated.

[ad#Google Adsense 336×280-IA]You see, wages, pensions, and Social Security are all dependent in some measure on the Consumer Price Index.

It affects the income of some 80 million Americans through contracts or indexation.

Now, we’re being told that inflation is at record lows, but we know that’s underreported.

What isn’t widely known is how vulnerable this particular market, and the wealth of millions of people invested there, is to even modest inflation spikes.

That’s right: Inflation that would seem downright tame by 1970s standards could wipe you out.

Unless you have this investment on your side…

These Low Levels of Inflation Are Aberrations

In an historical context, the last seven years have been a major outlying event. Central banks have been on a massive quantitative easing binge with promises of plenty still to come.

Yet deflation, not inflation, still appears the larger concern. Indeed, official inflation in most of the developed world has been elusive. In the United Kingdom, prices recently fell for the first time since the 1960s.

It’s gotten so that anyone warning of coming inflation is the proverbial “boy who cried wolf.”

But to ignore its risks, and worse, to go unprepared, is likely to be a major mistake.

“To go from say 0.5% to even 2%, percent let alone 3% or 4% would be a massive change,” said Pippa Malmgren, founder of the London-based DRPM Group and a former adviser to U.S. President George W. Bush. “It would be a serious event for the public and for markets.”

Many economists agree that markets have become highly desensitized to the risks.

Mark Schofield, a Citigroup strategist, said in a client report that just moving to 2% to 3% inflation from the current environment would be “likely to unsettle investors considerably. An inflation surprise is, perhaps, not as remote a risk as might be imagined.”

It’s easy to see why people would be caught out.

Investors Have Simply Forgotten the History

For the past 30 years official inflation numbers have averaged about 2.5%. An entire generation has known nothing else. 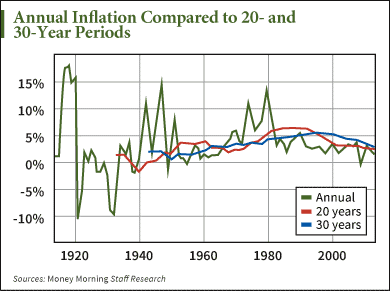 But current consumer price inflation (CPI) numbers are considered by many to be unrealistically low.

Financial planners will typically factor in 3% for long-term inflation.

Yet just in the last century, we’ve experienced numerous periods of high inflation, as well as much higher average inflation.

What’s more, bouts of spiking inflation like we saw in the late 1970s can have an outsized and lasting effect, as those much higher prices tend to remain high even if they only rise more slowly afterwards.

That was severe enough to watch the buying power of a $100 bill drop to just $31 over that time span.

Consider, too, that all these numbers are based on “official” CPI figures, and there’s plenty of reason to doubt those. 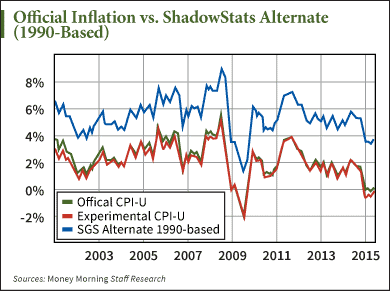 For example, some truly enlightening information published by economist John Williams at ShadowStats.com tracks consumer price inflation, but in parallel calculates it according to the older 1980- and 1990-based methods.

And the results are shocking… 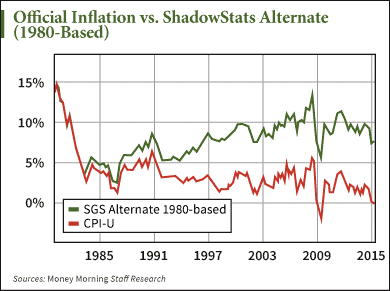 Yet anyone who pays rent, buys groceries, and fills their car with gas knows the 1980s numbers are much closer to reality than anything “official.”

The United States may be reporting around 200,000 new jobs per month, but many of these tend to be part-time positions with little opportunity for advancement.

And while there’s a concerted push towards higher minimum wages, like $13 in California and even $15 nationally, those higher operating costs will inevitably “trickle up” to higher levels of management.

Pick Up This Hedge at a 25% Discount Now

It was the first public company whose stated purpose was to acquire large numbers of single-family homes at highly depressed prices, rent them out, and pay most of the net rent out to unitholders.

Thanks to its legal structure as a real estate investment trust (REIT), Silver Bay is obliged by law to pay out at least 90% of its income after expenses as dividends.

Even better, thanks to the “flow-through” nature of a REIT, that income is only taxed once, allowing for larger dividends and therefore a better yield.

Silver Bay’s inventory of homes is concentrated in some of the most desirable markets, with holdings across Florida, Georgia, California, North Carolina, Ohio, and Texas, as well as in cities like Phoenix and Las Vegas.

According to Raymond James Financial Inc. (NYSE: RJF) analyst Buck Horne, “Within our housing coverage, we continue to find that many investors still don’t grasp the magnitude of the ongoing household shift into single-family rentals (or the value opportunity in the single-family REITs).”

The company has acquired about 9,200 houses, whose average cost is about $141,000. Yet the replacement cost for those homes is an average of $207,000. And their market value is almost certainly comfortably above that.

What’s more, Silver Bay bought these homes with about 60% down and 40% financed. That’s way more conservative than the average homebuyer today.

Consider too that, courtesy of the housing crash, housing starts have been below average for nearly the past eight years. As demand has returned to the market and supply has remained very limited, prices have risen. But the bust was so dramatic, there’s still plenty of room to catch up to fair value.

Meanwhile, in some metro areas of the United States, a lack of supply is causing bidding wars to emerge. And that supply is a challenge to increase, with homebuilders reporting serious shortages of skilled labor and the lowest level of unemployment in the construction industry since 2001.

I estimate Silver Bay is about 25% undervalued right now, plus it pays a 2.9% dividend that’s likely to grow. And Silver Bay looks like a great way to buy a real asset on the cheap that’s well positioned to protect investors against inevitable inflation.

Consider adding SBY to your portfolio and use a 25% trailing stop.