We are getting into the meat of the second quarter earnings seasons even as the market is being buoyed by the latest “kick the can” agreement in Greece.

One thing is clear to me going through dozens of early reports.

Given the sector sells at a significant discount to the overall market multiple in what I consider at least a slightly overvalued market, I have moved this financial sub-sector to heavily overweight within my own portfolio.

I have myriad reasons to do so.

Yields have gone up significantly since the first quarter of this year.

The ten-year treasury yield recently hit a 2015 high and hovers just below 2.5%. With the Federal Reserve set to hike interest rates for the first time since 2006 by year end and domestic GDP growth accelerating from a tepid first quarter, interest rates should continue to rise gradually over the next six to twelve months. This will help boost net interest margin growth, one of the biggest profit drivers at banks.

Default rates are at historical lows:

Loan loss ratios at Wells Fargo (NYSE: WFC) are at their lowest levels in at least two decades and at JP Morgan (NYSE: JPM) they are at lows not seen since the late 90s. With the strongest job growth in a decade and with wages just starting to accelerate, this trend should continue. Obviously these trends will be a continuing tailwind to earnings growth.

Mortgage originations were up almost 30% year-over-year at Wells and better than that at JP Morgan this quarter. These are two of the largest bank lenders in the market and this growth shows that housing is getting better. In addition, home builder confidence is at a ten year high and housing starts are increasing at a solid pace. After being deeply under the annual average of the past three decades since 2007, housing starts are finally to tick up but have quite a way to go before they get back to long-term trend levels. With household formation increasing nicely and mortgage credit finally starting to loosen, housing activity should increase at a solid pace for years to come. Which will provide an important earnings driver to major banks.

One of the surprising and positive things that came out of this quarter’s earnings reports at major banks is that legal costs are finally starting to drop. It seems the legal gauntlet banks have endured over the past half-decade is at long last starting to ebb. Given that major banks have paid more in fines and settlements than they actually posted in credit losses from the financial crisis and its immediate aftermath; it is about time. This could be the start of “normalcy” which would be a welcome tailwind for the bottom line at major banks in the quarters and years to come.

Banks are doing a wonderful job using technology to push operational costs downward. ATMs have additional functionality and mobile banking is gaining major traction. This is allowing banks to close and consolidate branches as well as lower overall personnel per branch.

I see these beneficial trends being in place for many years to come and why I have been overweight major banks throughout 2015. In addition, now that bank balance sheets have been bolstered and earnings growth has returned; I expect the Federal Reserve to be more lenient in the years ahead allowing banks to return a larger share of their profits to shareholders via dividends and stock buy backs. 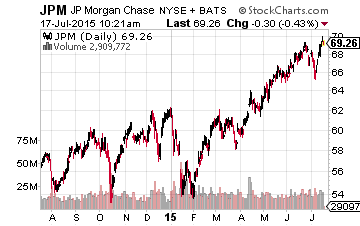 My favorite major bank continues to be JP Morgan even though it is up more than 15% since I included it in the Blue Chip Gems portfolio earlier this year.

I consider it and Wells Fargo to be the best managed large banks out there.

Even in a decent economy, I think the bank can grow earnings at 10% to 15% annually for many years. The shares yield 2.7% with a payout ratio on this year’s likely earnings of approximately 30%. I see that payout ratio creeping into the 40% to 50% range as the bank continues to remove the regulators’ yoke and leave the financial crisis aftermath behind. The stock is a solid bargain at approximately 12 times forward earnings. 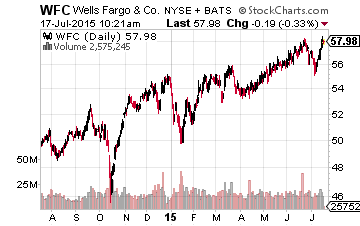 Wells Fargo is a good pick up for investors looking to get more exposure to improving housing and domestic credit growth. Wells has a limited investment banking presence compared to JP Morgan so is a more a pure play on improving economic metrics.

It pays a similar 2.7% dividend yield and fetches 13 times next year’s earnings. 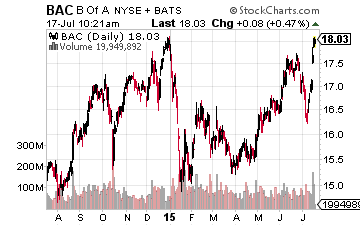 Going out on the risk/reward scale, Bank of America (BAC) is worth a look here. The most troubled major bank since the financial crisis just put out its best quarter in years and is seeing legal costs drop dramatically.

It is also seeing a surge in mobile banking allowing the bank to slowly cut branch and employee costs. It should have the best earnings growth of major banks through 2016, sells for less than book value and goes for under 12 times next year’s earnings projections.

It has been a tough half-decade for the major banks, however, brighter skies seem on the horizon. They offer solid values in what I consider at least a slightly overvalued market, and will benefit greatly from improving economic conditions, higher interest rates, and a stronger housing market.