Accumulating vast sums of wealth and passive income isn’t difficult at the heart of it.

It simply requires living below your means and investing your excess capital into high-quality investments that produce enough passive income for you to live off of.

But if it were really that easy, everyone would be doing it. Right?

Well, I think it’s maybe not quite that easy, but it’s a lot easier than some people make it out to be.

[ad#Google Adsense 336×280-IA]How else would I have been able to accumulate a portfolio chock-full of equity in excellent businesses that’s valued well into the six figures?

And that was all on a fairly modest income.

But I’m being coy.

There’s more to it than just saving and investing.

You also want to score deals on your investments.

Well, that’s something that’s priced less than what it’s intrinsically worth.

If you see a designer pair of jeans that’s usually priced at $100 all of the sudden marked down to $30, you might have a deal on your hands.

Likewise, I try to find high-quality dividend growth stocks that are marked down.

See, stocks have a price tag attached to them just like any other merchandise. But the price you see may or may not accurately reflect what that particular stock is actually worth.

I tend to find more often than not that the price is actually not reflective of value at all.

How do you tell the difference between price and value?

This guide, published by prominent writer and investor Dave Van Knapp, would be a good start. But you’ll really want to build upon that, making sure you have the ability to decipher fair value all on your own, before even looking at the price.

I’ve spent years practicing valuing stocks, to the point to where I now feel fairly comfortable with my estimates.

And what I like to do is peruse David Fish’s Dividend Champions, Contenders, and Challengers list for “deals”.

Mr. Fish’s list is a treasure trove of information on more than 700 US-listed stocks. But these aren’t just any stocks. These are all stocks that have increased their dividends for at least the last five consecutive years.

Once I see a deal there, I tend to pounce on it. And that’s mainly because prices and yields are inversely correlated. When prices fall, yields rise. And vice versa.

And it’s obvious that a 3.5% yield is preferable to a 3% yield on the same stock. Not only will you be receiving more income, but you’ll also be looking at greater total returns over the long run.

As it turns out, I recently found an undervalued stock on Mr. Fish’s list.

And I’m going to share that name with you readers today!

ITC Holdings Corp. (ITC) is the largest independent electricity transmission company in the US. They own more than 15,000 miles of high-voltage transmission lines and supporting facilities across seven states.

Never heard of it? Well, you’re about to.

First off, I wouldn’t be writing about this stock if they weren’t a perennial dividend grower. And they don’t disappoint here.

They’ve increased their dividend for the past 10 consecutive years.

The payout ratio is quite modest for a utility company, coming in at just 41.9%.

Although, the yield is also lower than most utilities – 1.93%.

So what we have here is an interesting stock where it’s a utility at its heart (though, the company owns no generation), but it sports a lower yield and higher growth rate than what you typically see with most peers.

And it’s in that growth that the stock really shines.

And it looks like the party isn’t ending: S&P Capital IQ predicts that EPS will grow at a 10% compound annual rate over the next three years, which is still incredibly solid for a company like this.

One aspect of most utilities that bothers me (I’m a rather conservative investor) is the heavy usage of debt. It’s a necessary evil in an industry where operations are capital-intensive and require ownership of large and expensive assets.

ITC sports a balance sheet that is neither better nor worse than a lot of other companies in this space, in my opinion. The long-term debt/equity ratio is 2.35 and the interest coverage ratio is just over 3. Not great numbers, but not particularly poor compared to peers.

Profitability, as probably expected with the growth we see above, is robust. Over the last five years, the firm has averaged net margin of 22.97% and return on equity of 14.50%.

I’ve long been lukewarm on utilities in general due to heavy regulation (which can result in mediocre growth), geographical constraints, and the headwinds regarding alternative/clean energy.

However, the move to cleaner energy sources works in ITC’s favor. They own no generation, instead owning the infrastructure to transmit energy from rural areas to major cities in the Midwest. As their network grows, so does their competitive advantages against more traditional utilities.

A lot to like here. But is the stock cheap?

ITC trades hands for a P/E ratio of 21.71 right now. That’s lower than the five-year average. In addition, it’s in line with a lot of other stocks (the broader market is trading for a similar P/E ratio) that are growing much, much slower than ITC.

So we might have a deal on some quality merchandise here. What’s it worth?

I valued shares using a two-stage dividend discount model analysis with a 10% discount rate. I then used an initial dividend growth rate of 13% for the first ten years and a 7% terminal growth rate thereafter. I think this is appropriate. The last dividend raise was 14% and that’s more or less the expectation for the foreseeable future. A 7% growth rate looking out over the very long term is reasonable for this business model, in my view. The DDM analysis gives me a fair value of $37.90.

My opinion is that we have an undervalued stock on our hands, and one that is high quality and growing at an incredible rate. However, I’m going to compare my analysis to that of some professionals that track and value this stock.

Morningstar rates ITC as a 5-star stock, with a fair value estimate of $42.00.

Wow. No matter how you slice it, this stock is cheap. Not all that often you find that in this market. Averaging out the three numbers gives us $38.77. That would indicate this stock is quite possibly 15% undervalued right now. 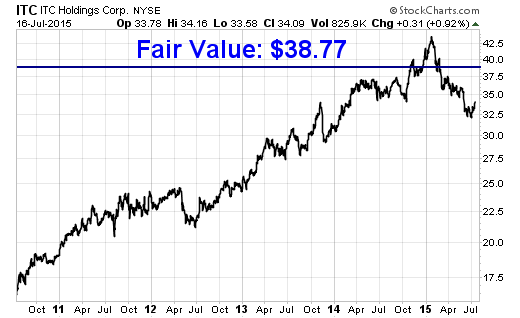 Bottom line: ITC Holdings Corp. (ITC) is one of the highest-quality utilities I’ve ever come across. They’ve turned possible industry headwinds into tailwinds, taking advantage of and profiting from their unique position. The stock appears to be wildly undervalued here, especially relative to the quality and growth potential. I just recently initiated a position after strongly looking at it. I would suggest a strong look at it for you as well.