The oil sector has been selling off lately…

The price of oil has fallen around 10% over the past two weeks.

Meanwhile, the general decline in the broad stock market is putting pressure on oil stocks.

The Energy Select Sector SPDR Fund (XLE) has fallen more than 10% in the past two months.

It closed Tuesday at just more than $74 per share – the same price it was back in January.

In other words… oil is up 15% since January, but oil stocks are trading at the same price. So it’s time to ask the question… Have oil stocks bottomed?

Take a look at this chart of XLE… 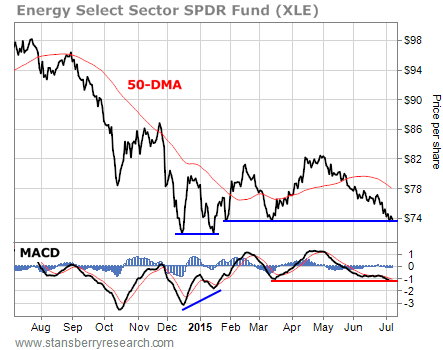 At the time, XLE had re-tested its December low and that level held as support. So the chart showed a “double bottom” pattern. It also showed positive divergence on the moving average convergence divergence (MACD) momentum indicator. In other words, while XLE was making lower lows, the MACD was making higher lows. That was a good setup for calling a bottom.

XLE gained 15% over the next three months.

But now, the setup is a bit different.

XLE is sitting on the support line connecting the late-January and mid-March lows. This is the third time XLE is testing this level, and it’s a good spot to be looking for a bounce.

XLE is oversold, and it is testing support. So a bounce is likely to happen. XLE could rally back up and test the 50-day moving average (DMA) as resistance at about $77.50 per share in the short term.

But without any positive divergence on the MACD indicator, that bounce is likely to fail and XLE should drop back down at least one more time.

Aggressive traders can try to buy oil stocks here for a quick, oversold bounce. But be quick to take gains. The sector has more work to do on the downside before creating a solid bottom.

Longer-term investors should wait until we have a better setup on the chart before committing to the oil sector.