Interest rates are historically low in the U.S. In Europe, rates have spent time in negative territory… meaning investors were willing to take a guaranteed loss.

[ad#Google Adsense 336×280-IA]It can be hard to get a handle on what’s happening today in the bond market… never mind where things may be headed tomorrow.

Fortunately, as we’ll explain today, there’s a simple framework to help cut through the noise.

We hope it will give you a more intuitive understanding of what’s causing moves in bond markets and interest rates and help you figure out what will happen next. 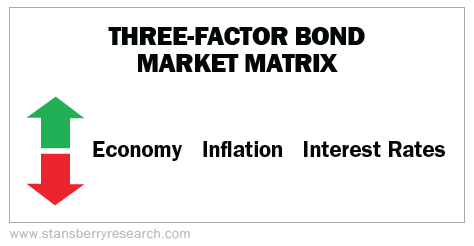 These three measures (the economy, inflation, and interest rates) usually head in the same direction. If you know which way two are going, you should have a good idea of what’s happening to the third.

For instance, if the economy is heating up and inflation is rising, you can be sure that interest rates are rising, too.

Alternatively, when you see interest rates start to rise, you should expect the economy to be doing well or inflation to be rising… and likely both.

You’ll notice we don’t have the Federal Reserve or the European Central Bank on there. That’s because their direct effect is smaller than most think.

It’s also important to realize that these actions can happen on the basis of expectations, not necessarily reality.

Last month, the European Union announced that the region’s gross domestic product (GDP) grew at a 0.4% rate in the first three months of the year. That was better than expected.

Investors saw strength in the region. They also figured this lowered the chances of deflation. They took appropriate action by selling off some of the super-safe German bunds (the German equivalent to U.S. Treasury bonds) they held.

The severity of the move had to do with valuation.

We like to call high-flying stocks “priced for perfection.” When a growth company trades at many times earnings, it needs to perform perfectly. If it misses earnings estimates by even a tiny bit, it can see its price collapse quickly.

The same thing happened with the German bunds that paid 0.07% in interest. Investors bought these bonds because they were scared of risks in Europe and saw no better place to put their money. When the mood is that dark, even a tiny ray of sunshine can send investors flying to the exit.

In the U.S., we’re in much the same scenario. People said that rates were rising in anticipation of a move from the Federal Reserve, but we think there’s a feedback loop in effect.

Yes, the Fed may raise the interest rates it controls. But the Fed won’t raise rates until the economy is humming along and inflation starts to pick up.

When rates were rising, investors were reacting to those conditions, not to the Fed in particular.

Now, with Wednesday’s Fed announcement that rates will remain near zero, investors are pushing back their expectation for the Fed’s rate hike. Since Wednesday, rates have started to drift down again.

So yes, it’s a wild time for bond markets. Keep this simple bond market matrix in mind next time you want to get a sense of where the economy, rates, or inflation are headed. You won’t find a simpler way to see exactly what’s happening.