The market continues to trade in one of the narrowest ranges in the last two decades as bulls and bears dig their heels in.

[ad#Google Adsense 336×280-IA]It would be easy to make either the optimistic or pessimistic case here given myriad and conflicting economic readings.

After examining both sides of the coin, I am more in the bear camp at the moment and am waiting for a significant pullback to start buying top quality stocks at reduced prices.

After contracting in the first quarter, it appears that domestic economic growth will be much better in the second quarter, perhaps as high as three percent on a GDP basis although 2.5% is more likely.

Greece is again in the news as negotiations about the latest tranche of its bailout are not going well. This could be the time that a “Grexit” finally becomes a reality. I think however that the European Union will punt one more time and do one last round of “extend and pray” but eventually the Greeks will have to be let go from the Eurozone.

Although these talks could be troublesome for the market until they are resolved one way or another, other factors are more concerning for equities and for investors as well. My three key worries for the market are as follows, and I would not be surprised to see something of a “June Swoon” before quarterly earnings reports start to hit in mid-July.

Most pundits are articulating the reaction will be muted. However, since a lot of analysts have not seen an interest rate hike in their careers (the last Fed Fund rate increase was nine years ago) the reaction could be greater than most investors are factoring in at this point.

The rise in rates in 2015 already impacted the market. High yielding real estate investment trusts and utilities have been two of the weakest sectors so far. On the flip side, financials have been one of the stronger areas within equities over the past few months as rising interest rates boost net interest margins at banks and increase returns from investment portfolios at insurers. 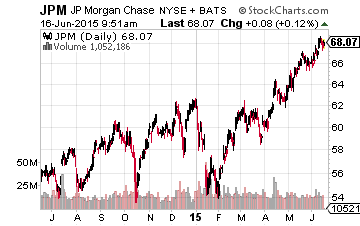 Financials still have upside in my opinion and I am overweight the sector.

I have increased my allocation recently to the likes of JP Morgan (NYSE: JPM) and it has also done well since being put in the Blue Chip Gems portfolio.

The bank is probably the best managed of the major banks.

The shares are also cheap at around 11 times forward earnings, yield nearly three percent, and has unbeatable cash flow as well.

The market is not cheap at current levels after the stock market rally of the past six years. On a GAAP earnings basis, the S&P 500 is valued at over 20 times earnings. Investors may have been willing to pay more than historical valuations when interest rates were under two percent but will they value equities in the same way if interest rates continue to rise? This is especially true given very tepid earnings growth in the first half of the year on a year-over-year basis.

Margins are at or near all-time highs and companies have long ago optimized operations leaving little fat left to cut. Wage growth is starting to accelerate recently. While good for the American consumer, it could put additional pressure on margins and earnings.

Although there are still some pockets of value in the market, it is hard to see the overall market compelling on a valuation basis. I also expect continuing robust merger and acquisition (M&A) activity in the market as organic growth is hard to come by right now and companies are rushing to lock in low interest rates for their purchase. M&A activity is already approaching pre-crisis levels. More worrying is this also happened just before the big bear markets in 2000 and 2007.

There are also some bubbles forming within the global market that should be watched closely. The Chinese markets are on fire even as economic growth is posting its weakest numbers in recent memory. The main trigger to this huge rally is a link that opened in November between Hong Kong and the mainland. This has increased speculation massively as tens of thousands Chinese nationals open online brokerage accounts daily. Valuations, and the huge moves in Chinese indices remind me a lot of the internet bubble in 1999 just before it burst.

Domestic biotech stocks have also been on fire so far this year, with the sector providing a better than 20% overall return in 2015; far stronger than the overall market. Small biotech equities like Bluebird Bio (NYSE: BIO) have been the top winners in the first half of the year with several providing better than 500% returns in just six months. The small cap part of the sector seems ripe for a correction like the one that took a lot of small biotech equities down 50% or more in two months starting early in March of last year.

June is the worst performing month for the market over the past decade on an average performance basis. If we do get a significant pull back in equities, I would not be surprised if it commences this month. I am overweighting large cap growth stocks that still offer reasonable valuations in this overbought market like Gilead Sciences (NASDAQ: GILD) as well as Apple (NASDAQ: AAPL) in my own portfolio. I also have raised my cash holdings to just over 20% as I believe lower entry points will be available by the end of summer. Now is the time for caution not greed.