It’s getting increasingly difficult to find value in the current stock market.

Well, let’s take a look at a quick stat.

The S&P 500 (the broader market) has basically doubled over the last five years.

[ad#Google Adsense 336×280-IA]Not only that, but it’s done so in almost a straight line, with limited major pullbacks, or corrections, along the way.

When the market doubles in a short time frame like that, that must mean that all stocks have also doubled over that period as well. Right?

I like to think of the stock market like a store… where there’s a bunch of merchandise for sale whenever the store is open.

And some merchandise is cheap. Some is expensive.

But it pays to shop in the clearance aisle and focus on cheap merchandise.

I can say that with confidence because that’s helped me build a six-figure portfolio in a relatively short period of time, all on a modest income.

How do we know which merchandise is expensive and which is cheap?

Well, one has to value stocks.

A stock will always have a price tag attached – that tells you what you’ll pay.

But stocks also have intrinsic value – that tells you what a stock is actually worth.

Price and value are most certainly not one and the same.

If you’re at all unfamiliar with deciphering the difference, I’d definitely recommend checking out Dave Van Knapp’s valuation guide.

So what I’ve done to build up that portfolio of mine is this: I’ve focused on high-quality dividend growth stocks priced at or below their intrinsic value. And then I buy them.

Well, simple can be incredibly wonderful. And profitable.

The dividend growth stocks I look at and buy can be found on David Fish’s Dividend Champions, Contenders, and Challengers list – a list that features information on more than 700 US-listed stocks that have all increased their dividends for at least the last five consecutive years.

I love to buy quality businesses at a good value. And I love to focus on those businesses that reward me as a shareholder with rising dividend payments for years or decades on end.

But check this out.

There’s a stock on Mr. Fish’s list that has increased its dividend almost three straight decades, yet it also appears to be priced below its intrinsic value.

Which stock is it?

Chevron Corporation (CVX) is a global integrated oil and gas company, with interests in exploration, production, refining, marketing, and petrochemicals.

So I mentioned earlier how the broader market has basically doubled over the last five years.

But Chevron? It’s only up a little over 42% over that same period.

Even better for those looking for a deal, it’s down more than 9% YTD because of underlying weakness in the price of oil.

But all that price action doesn’t necessarily correlate with the actual intrinsic value of the company.

And it sure doesn’t correlate with the dividend income track record: CVX has increased its dividend for the past 27 consecutive years.

So while CVX’s stock price has gone up and down, the dividend has just gone in one direction: up.

And over the last decade, the dividend has increased at an annual rate of 10.7%.

Meanwhile, the stock still sports a fairly healthy payout ratio of 46.8%, even though earnings have been hurt by cheaper oil.

But what’s perhaps most attractive of all is the yield – CVX currently sports a very attractive yield of 4.2%.

A lot to like here about the dividend for sure. Great track record, attractive yield, and healthy payout ratio. But let’s see what kind of growth in revenue and earnings per share Chevron has managed over the last decade, which will later help us value the business.

Chevron’s results are skewed positively and negatively by commodity pricing, largely because they don’t directly control the price of oil and gas. Nonetheless, they’ve managed positive growth through a rather turbulent time. And they’ve also increased their dividend routinely straight through the last 10 years, which I think speaks volumes.

S&P Capital IQ anticipates that EPS will grow at a -1% compound annual rate over the next three years, citing the lack of significant production growth, oil price headwinds, and the possibility that buybacks won’t help propel the bottom line (buybacks have been temporarily suspended).

Nonetheless, you have to think about CVX as a long-term investment – and the world still runs on oil and gas. This is no short-term trade here.

One aspect of the business that should help them survive – and thrive – through this volatile period is a fantastic and flexible balance sheet. Chevron has a long-term debt/equity ratio of 0.15, which indicates somewhat negligible debt. They have had no interest expenses over the last three years.

Profitability compares very favorably to other oil supermajors, though the peer group is somewhat small. Their net margin has averaged 10.01% and return on equity has averaged 18.21% over the last five years. Both metrics are excellent.

So I think you can see there’s a lot to like here. It’s certainly a difficult and turbulent time for any companies in the energy space, but Chevron’s excellent balance sheet, integrated operations, and history of quality seem to portend continued solid returns for shareholders over the long haul.

Meanwhile, the stock has been crushed over the last year. Do we have a deal on our hands?

CVX’s P/E ratio is 11.14 right now. That compares extremely favorably to the broader market, which is almost twice that. However, CVX’s five-year average P/E ratio is 9.8. Keep in mind, though, that part of that period included a rather massive run up in oil prices.

So the stock appears cheap relative to the market. But what should we pay?

I valued shares using a dividend discount model analysis with a 9% discount rate and a 5% long-term dividend growth rate. That growth rate is on the lower end of what I normally use, which is designed to compensate for the volatility in commodity pricing, somewhat tepid underlying growth, forecast for growth over the foreseeable future, and moderate payout ratio. But I think you have to also give CVX some credit for the incredible business model and track record. The DDM analysis gives me a fair value of $112.35.

My analysis indicates that CVX is undervalued here, but let’s see where some professional analysts that track and value this stock stand on this issue.

Looks like I’m not only not alone on this one, but I’m actually on the conservative side. If you average out these three numbers so as to arrive at one conclusive value, we get $117.45. This stock thus appears 16% undervalued right now. 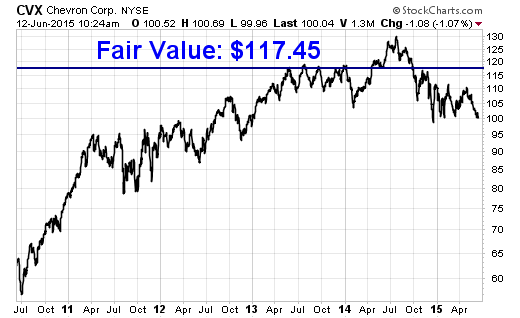 Bottom line: Chevron Corporation (CVX) is a high-quality integrated supermajor whose products and services should stay in demand for many years to come, regardless of volatility along the way. That volatility has picked up over the last year and this stock has been punished as a result. What we now have is a stock that appears to have 16% upside along with a 4.2% yield to pay you while you wait for oil to recover. This is a stock that long-term investors should have on their radar.