Business models that remain relatively unchanged over the last fifty or hundred years are some of my favorite investments.

Lack of change means that it’s relatively easy to forecast where a company might be ten or twenty years down the road.

[ad#Google Adsense 336×280-IA]If a company can profitably sell products and/or services for decades upon decades with little change, it would seem that inertia is on their side and that will continue for the foreseeable future.

Not only that, but it typically requires less investment to keep a business model running when there isn’t a lot of change necessary.

And that can lead to robust free cash flow.

But what if you can combine an age-old business model with ubiquity and high margins?

Well, that would result in Hershey Co. (HSY).

Think about it. How often does chocolate change?

Not often. Chocolate bars today are much the same as they were 50 years ago. And other than perhaps responding to changing consumer preferences for all-natural ingredients, they’ll likely be very similar in 50 years to that of today.

And it doesn’t get much more ubiquitous than products manufactured and sold by Hershey.

Not only are these products available at pretty much any grocery and convenience store across the country, but the company has an approximate 45% market share of the domestic chocolate market.

So that means when people are in the mood for chocolate, they’re very likely going to be buying something made by Hershey.

Successful investing doesn’t need to be exciting or overly risky. One doesn’t need to invest in the next high-flying tech play out of Silicon Valley and deal with sky-high risk. Candy is something that was in demand 100 years ago. It’s still in demand. And it’ll likely be in demand ten years from now.

In fact, making money with a boring investment like Hershey is far better, in my opinion.

You don’t need to worry about obsolescence, that’s for sure. The odds of people buying chocolate for many years to come are quite high, leading to some level of certainty regarding your return. And the stock’s beta is just 0.20, which means that it’s only 20% as volatile as the broader market.

Let’s see what Hershey has generated in terms of growth over the last decade. We’ll take a look at the top and bottom lines before moving on to some other fundamentals, which will help us determine the quality of the enterprise before reasonably estimating its fair value as a business.

Meanwhile, earnings per share increased from $1.99 to $3.77 over this stretch, which is a CAGR of 7.36%. Improving margins combined with a slight reduction of outstanding shares helped fuel the extra bottom-line growth.

Obviously, not eye-popping numbers here. But they’re also not bad. And we are talking about selling candy here. So you’re still getting high-single-digit growth in profit all while taking on somewhat low risk.

But what about the dividend? It’s one thing to grow the business at a fairly attractive rate, but quite another to share that growth with the shareholders.

Well, HSY has been paying dividends since 1930, but has only increased its dividend for the past five consecutive years after holding it static for a period during the financial crisis.

That five-year track record qualifies the stock to be included in David Fish’s venerable Dividend Champions, Contenders, and Challengers list. Mr. Fish’s list names all 722 US-listed stocks that have increased their dividends for at least the last five consecutive years. It’s a unique resource that is a must-read for any serious dividend growth investor.

So there’s a rich dividend history there for HSY, but its short dividend growth record perhaps belies that. I’m not sure I’d really place too much weight on that blip. Nonetheless, the last five years have been rewarding – the five-year dividend growth rate is 11.4%.

EPS growth over the last five years has been stronger than that of the last 10, so the payout ratio is still a moderate 52.8%.

And the stock yields 2.31% right now, which is just a little higher than its five-year average.

The rest of the fundamentals also appear quite attractive, including the balance sheet.

HSY’s long-term debt/equity ratio stands at 1.06 and their interest coverage ratio is 15.91. These numbers are fairly solid all by themselves, but it’s also worth noting that HSY has markedly improved its balance sheet over the last five years.

The company has generated net margin that’s averaged 10.43% and return on equity that’s averaged 63.99% over the last five years. They don’t really have any publicly traded peers (Mars, Incorporated is a private company), but these numbers do compare quite well across the packaged food space.

You’ve got products that are easy to understand, tend to not really change too much over long stretches of time, are ubiquitous, and will very likely be in demand for the foreseeable future and beyond.

Sure, the growth isn’t outstanding. But underlying profit growth of more than 7% annually on a per-share basis along with a yield well above 2% offer fairly appealing total returns considering the risk.

Even better, the company’s “Project Next Century”, announced in 2010 to improve the supply chain and cost structure, is coming to a conclusion. So spending will likely be reduced while cost savings from that project could lead to better cash flow.

In addition, potential growth opportunities exist outside of the US. The company’s International and Other segment accounted for approximately 14% of FY 2014’s sales, which means North America is still the dominant source of HSY’s sales. The company estimates its share in China’s chocolate market is about 11%, so there exists plenty of room to improve that. However, sales in China fell almost 50% in the most recent quarter, which is something to keep an eye on.

There are, of course, risks to consider like competition, input costs, changing consumer preferences, and currency effects.

Looking at the valuation, the stock’s P/E ratio is 22.87 right now. That’s higher than the broader market, but it’s also significantly lower than HSY’s five-year average P/E ratio of 24.6. I consider that average to be awfully high when looking at the growth, which would probably explain the lower valuation today.

I valued shares using a dividend discount model analysis with a 10% discount rate and a 7.5% long-term dividend growth rate. I’m perhaps giving the company the benefit of the doubt here as that’s just slightly above the rate at which EPS has grown over the last decade, but I’m also factoring in the stronger recent growth, the low payout ratio, the rate at which the dividend has grown over the last five years, and the overall strength of the business. The DDM analysis gives me a fair value of $92.02, which indicates the stock is roughly fairly valued right now. 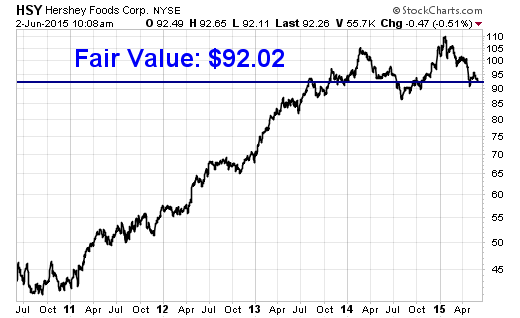 Bottom line: Hershey Co. (HSY) operates a very attractive business model. Candy doesn’t change much, and so it’s somewhat insulated from the overall trends of the broader food industry. Selling chocolate is something that will unlikely change much over the next 20 or 30 years. Great brands, solid fundamentals, relatively low risk, an above-average yield, and a fair valuation means this is a stock that should be considered here.