It has been quite some time since I penned a solo article on Apple (NASDAQ: AAPL). This is not at all like in the second quarter of 2013 when I was writing a new piece every ten days or so articulating why it was one of the cheapest large cap growth plays in the market — a title that now belongs to Gilead Sciences (NASDAQ: GILD).

[ad#Google Adsense 336×280-IA]At that time, Apple made up nearly 10% of my overall portfolio, a very high allocation in a well-diversified portfolio.

The tech giant now makes up less than three percent of my holdings, but I still think this tech stock will continue to outperform the market in the quarters ahead and is still a must own in every portfolio.

The company and its stock are always fodder for a lot of conversation from the financial press on a weekly basis.

Last week the company was in the news for a couple of reasons.

The Wall Street Journal published an article on the Cupertino giant around its efforts to enter into the smart television market.

The newspaper reported that Apple actually disbanded the unit looking to produce its own television approximately a year ago.

This was news for a couple of reasons. First, most pundits were still expecting the tech company to eventually to get into this highly competitive market. Instead, Apple is looking to launch a web streaming video service. The second reason investors should take note is it shows how disciplined Apple is with its capital allocation.

The team evidently found no way they could enter the market and achieve decent margins given how lousy profits are in this space with almost all the major manufacturers struggling to post small profits or breakeven. Sometimes it is what a company doesn’t do that is just as important as what it does do.

This was a smart move by Apple to avoid a capital eating industry that would have brought its overall margins down. The web streaming service is a much more promising area as is the company’s just launched Apple Watch.

The other big Apple news last week was noted multi-billion fund manager and activist Carl Icahn has penned yet another “open” letter to Apple. Mr. Icahn gives management kudos for its recent work but is still calling for increased stock buybacks even as the company returned more than $65 billion to shareholders via dividends and stock buybacks in 2014. 2015 should see similar largesse.

What is making headlines is his statement that Apple is already worth $240 a share and based on his belief the shares should trade at 20 times the $12 a share in earnings he pictures in FY2016 – provided, of course, the company accelerates its stock repurchase authorization even further from already generous levels.

No one can fault Mr. Icahn for talking his book and one has to acknowledge this well-known money manager’s ability to generate buzz. His call for a price target of $240 a share should also come to fruition, but not for a few years at least. A more reasonable price target to me would be right around $145 a share for the following reasons.

Currently, the consensus earnings estimate for FY2015 which ends at close of September is $9.00 a share. The current consensus for FY2016 is $9.65 a share in profit. This means the stock currently is priced right at 14.5 times forward earnings. If at year end investors still have the same valuation sentiment on Apple the shares should trade at approximately $140.00 (14.5 X $9.65). 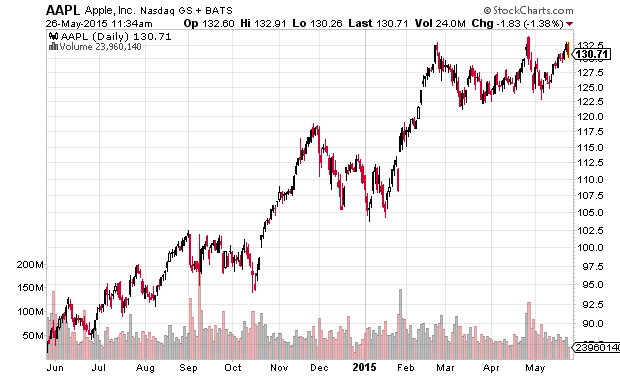 However, this estimate is too conservative given the runaway success of the iPhone 6 and the huge growth the company is seeing from China; which will be a key growth driver in the quarters and years ahead. Revenue from the Middle Kingdom increased a whopping 71% year-over-year in Apple’s last reported quarter to just under $17 billion for the period.

In contrast, North American sales growth came in at relatively paltry 19% boosting sales to almost $22 billion. If this current divergence of growth continues, China will be Apple’s biggest consumer market in the world by year-end. Since Apple does most of its manufacturing in China, one also does not have to factor in the likely currency fluctuations one would for sales in Europe for example.

In addition, analysts have been behind the earnings curve since the iPhone 6 launched worldwide. In the last two reported quarters, Apple has beat the consensus EPS by 46 cents and 17 cents a share respectively. Three months ago the consensus had Apple earning $9.16 a share in FY2016. That estimate is now $9.65 and should easily be $10.00 a share or better by the time the year closes.

Therefore, a conservative outlook, assuming that the exploding growth happening in China does not award Apple a higher multiple and the consensus earnings estimate goes to $10.00 a share before the end of December, gives me a price target of $145.00 a share (14.5 X $10.00 a share) by yearend.

If investors start to give Apple more credit for its huge growth in China and the stock trades towards the market multiple of 16 times forward earnings the stock could hit $160.00 a share in 12 months. I know my prediction of where Apple should trade by the end of 2015 will not garner the same headlines as Mr. Icahn’s but it is likely to be much more accurate when all is said and done.

It is hard to believe it was just two years ago that Apple had lost its “mojo” according to most of the financial press. Even after better than a 130% return since that recent nadir, the stock is still one of the best large cap growth plays in the market. It is also why Jim Cramer is right when he says “Apple is a stock you hold, not a stock you trade”. And it is why Apple was one of the inaugural picks of the Blue Chip Gems portfolio when it launched earlier this year and will remain so for the foreseeable future.