I want to give you a truthful look at what’s happening in the single most underestimated, misunderstood, and perpetually disrespected country on earth: China.

[ad#Google Adsense 336×280-IA]We’ll examine why China’s stock market is creating an ideal moment to invest, how savvy investors are jumping in, and what steps you can take to join them (including three investments you can make today).

Here’s everything you need to know…

Analysts Have Helped Create a $28.3 Billion Disconnect in World Markets

The latest “paranoid punditry” is coming from the head of emerging markets and global macro at Morgan Stanley Investment Management, Ruchir Sharma.

Speaking this week at the Global Private Equity Conference in Washington, D.C., he said he’s of the opinion that the worst of the Chinese economic slowdown is still ahead because of the nation’s debt.

Specifically, he noted that whenever a country increases its debt to GDP sharply over five years, there’s a “70% chance of a financial crisis and 100% chance of a major economic slowdown,” as reported by Yahoo! Finance.

The implication, of course, is that China’s going to see the same.

Respectfully, I really wish guys like Sharma would crawl into a hole somewhere. Their version of doom and gloom just isn’t true. China’s latest market rally began in Q2/2014 and tacked on 128% through the end of April.

Sharma is essentially making the same argument that many others have made for the last 40 years… and for 40 years they’ve been dead wrong.

Here’s where China’s got key advantages.

So what if China’s growth falls from 7% to 5%…? The United States will be lucky to do just 2% after spending trillions of dollars! You’re still talking about a country with a growth rate that’s double or even triple our own. Any central banker around the world will love to have those numbers.

Even if you can’t mentally get past that point about growth – and lot of people can’t for a variety of reasons – take a look at this chart.

China’s got around $4 trillion USD in reserve. That means Beijing can recapitalize China’s banking system several times over and still have change left. (Meanwhile, the United States is $220 trillion in the hole.) 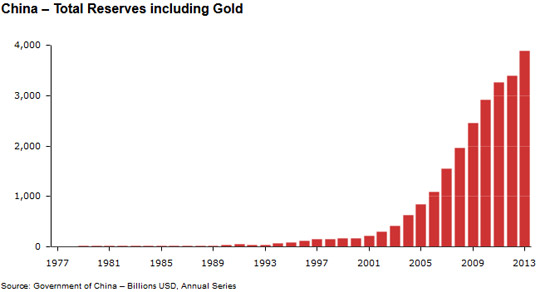 There’s no question China can “term out” the debt and take a page from our politicians by kicking the can down the road – a point Robert Petty of Clearwater Capital Partners made that echoes my own in response to Sharma’s observations.

Keep the numbers you hear in perspective. Here’s what I mean…
The State Administration of Foreign Exchange (SAFE) just reported that $28.3 billion in capital fled China’s economy last month… at a time when the Chinese economy was growing by 7%. Western economists flipped.

To put that in context, the U.S. economy saw $4.1 billion in capital flow across its borders last month in foreign investment, despite a much more anemic growth rate of 0.2%… exactly 1/35th of China’s current growth rate. Capital expansion and cross-border movement is a natural byproduct of growth.

The key thought here is that if China’s government wants to continue the growth it needs – and it does – China will have to develop new trading relationships with new trading partners. That’s why it’s pushing into Africa, the Middle East, and even Europe.

Don’t forget that China is a country in transition. It is moving from a manufacturing base to one that’s focused on domestic consumption (much the way the United States did 100 years ago). Liberalizing the economy is only a small part of the equation. A lot of money has yet to flow to education, medical care, insurance, and even social works.

While we’re at it, don’t forget we’re talking about an economy powered by 1.3 billion people using a currency that’s still not fully convertible and which is unencumbered by the “nanny state” spending of the United States, Europe, and Japan.

Hundreds of millions of Chinese consumers are expected to join the middle class by the year 2020 – that means hundreds of millions more people who will be able to afford cars, smartphones, and all manner of products they couldn’t afford before. A report from McKinsey projects that China’s upper middle class will account for 54% of urban households. In 2012, that number was just 14%.

This is the power of the demographics trend and why China’s at the heart of it.

It can break a nation, as is happening in Japan, which has the highest number of elderly per capita on the planet. Or it can lift entire nations to new heights, like the Baby Boomer demographic did for America post-World War II. China happens to be on the right side of the Trend at the moment.

And, finally, China’s still a centralized economy. While Western economists may not like it, this gives China a measure of strength we don’t have in our own “free” markets.

The irony was not lost on Warren Buffett, who noted at the most recent Berkshire Hathaway shareholder meeting that “investors should have faith in China.”

At the end of the day, China will play an important role in your financial future whether you like it or not. CEOs know that in order to achieve the growth they need to keep investors happy, they’ll have to find a way to work with the Red Dragon, even if our political leaders don’t… or can’t.

How to Invest in China

The company dominates the e-commerce industry in China (which is expected to grow by 32% this year, to total $562.6 billion in sales). The consulting firm Forrester says that the Chinese e-commerce market could grow to $1 trillion by 2020 – so Alibaba has enormous long-term potential if it can just retain, never mind grow, its current market share.

And it shows no sign of slowing down its aggressive acquisitions and partnering strategy that ties its fate ever more closely to China’s rise. For example, Alibaba recently announced a strategic investment in the logistics company YTO Express, which already services 2,300 Chinese cities and is one of only three companies in the country that is licensed for aviation logistics.

If ETFs are more your speed, consider the Guggenheim Small Cap China ETF (NYSE Arca: HAO). It’s a passive exchange-traded fund designed to replicate the performance of the AlphaShares China Small Cap Index. That gives it exposure to a wide variety of small-cap Chinese companies that would otherwise be off limits to Western investors including everything from basic materials to technology to healthcare, consumer cyclicals, and even communication services. HAO has returned 28.79% since I recommended it to Money Map Report subscribers eight months ago and remains a great choice today.

How to Invest Because of China

If you just can’t stomach the thought of an “in” country investment, then consider investing “because” of China.

Bar none, my favorite in this arena is Apple Inc. (Nasdaq: AAPL).

CEO Tim Cook makes no bones about the role China plays in Apple’s future noting late last year that he plans to grow the number of Apple stores in China by 166% in 2015. “When I look at China,” Cook said, “I see an enormous market where there are more people graduating into the middle class than any nation on Earth in history.”

What’s more, Apple isn’t confining its investments in China to the smartphone market. The company announced plans for a new solar installation project in China last month that will allow it to power all of Apple’s 40 stores and offices in China.

Given how seriously Beijing has signaled its intention to move away from fossil fuel dependency and turn to green energy in recent years, Apple’s investment could lay the groundwork for rapid expansion in a centralized economy that increasingly dictates that new facilities meet stringent energy requirements. Not to mention an entirely new revenue stream that’s not yet being contemplated here in the United States.

Perhaps most importantly, though, Apple has an additional reason to invest in China that most other companies don’t, and it’s related to the Demographics Trend. China surpassed the U.S. as Apple’s biggest iPhone market in April when revenue for the second fiscal quarter in the region surged by 70%, so $16.8 billion.

That’s a level of growth that will continue as hundreds of millions of Chinese citizens win entry to the middle class and continue to spike demand. And like any good CEO, Cook knows to follow the money.