“Only when the tide goes out do you discover who’s been swimming naked.”

And at the end of March, the “tide” was all the way out for oil companies.

Many of you are familiar with Warren Buffett’s quote above. It means lots of companies can operate on hair-thin margins in the good times… when the price of whatever they are selling – gold, oil, natural gas, copper, T-shirts, etc. – is high. But they’re toast when the price falls.

So far this year, oil-production companies alone have laid off 37,800 people.

And it’s not just here in the U.S. Around the world, layoffs from energy companies will hit 100,000 people, according to the Wall Street Journal.

We’re also seeing write-offs. For example, oil producer Anadarko Petroleum (APC) wrote down the value of a single field in Utah by $3.7 billion. The value of its natural gas reserves fell with the lower prices. When prices return, so will the reserve values, but right now it’s a big non-cash loss.

Here in the U.S., the number of drilling rigs is down 48% from a year ago and falling. Drilling giant Nabors Industries cut 41% of its U.S. drilling crews.

The bond-rating service Moody’s continues to forecast doom and gloom for the whole sector. But I’m not so sure…

You see, even with the layoffs, the write-offs, the cost cutting, and the idled drill rigs – oil production is going up.

According to the government’s Energy Information Administration (EIA), U.S. oil production will continue to grow through 2020… even using the lowest oil-price forecast available.

That continued production growth shows us that the reported death of the U.S. shale industry is greatly overstated.

You see, the best areas are still economical at $50-per-barrel oil, especially when drilling and services companies are cutting prices like mad to keep working. Drilling rigs are priced by the day (called a day-rate). Those prices have fallen as much as 30% from last year.

In the Eagle Ford Shale in Texas, drilling costs are down 20%, while “completion” costs (basically the cost of fracking the well) are down 10%. When the costs fall that dramatically, the break-even cost per barrel falls, too. The best operators there are still making money when oil prices dip to less than $50 per barrel.

And as you can see in the below chart of the price of benchmark West Texas Intermediate (WTI) crude oil, we’re already starting to see a recovery: 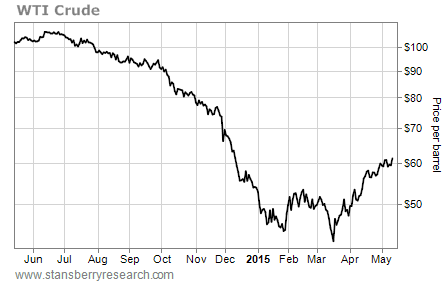 As oil prices creep past $60 per barrel, we’re going to see more life returning to the best shales – the Eagle Ford, the Marcellus, and the Permian Basin. We’ll likely see some life in the best parts of the Bakken, too.

However, this doesn’t mean it’s time to start jumping into U.S. oil and gas producers. As I’ve shown you in these pages recently, we’ll likely see most of these companies’ share prices continue to struggle in the months ahead unless the uptrend in oil prices continues. So for now, I recommend staying on the sidelines. But keep the sector on your radar. Eventually, these companies will rebound along with the price of oil.