There’s a troubling development going on in the bond market…

Investors are dumping the safety and security of U.S. Treasury bonds and buying high-yield “junk” bonds. In other words, they’re taking on more risk in exchange for slightly higher yields.

My guess is they’ll soon regret that decision.

When investors are optimistic, they’re willing to take on risk to seek higher returns… so they flock to stocks and high-yield bonds.

When investors hear bad news, they turn conservative and seek to protect capital… so they move out of stocks and junk bonds and into perceived safe havens like Treasury bonds.

We’re seeing this “risk on” trade play out today…

Treasury bond prices have been falling lately. The iShares 20+ Year Treasury Bond Fund (TLT) – which tracks the price of long-term Treasury bonds – peaked in February at more than $137 per share. Today, TLT trades for around $120. That’s around a 12% drop in just three months.

Meanwhile, prices of high-yield bonds have been rising. The iShares High Yield Corporate Bond Fund (HYG) – which tracks high-yield bond prices – was trading for $88 back in February, when Treasury bond prices peaked. Today, HYG trades near $91 per share. That’s a more than 3% increase in just three months.

It’s not just high-yield bonds. Investors have pushed the stock market to near all-time highs… And as I explained last week, they’re borrowing record amounts of money to buy stocks at these all-time high prices.

In short, investors seem a little too willing to take on increasing levels of risk today. Oftentimes, this leads to some sort of event that encourages investors to take some risk off.

And I suspect that event may be coming our way soon. 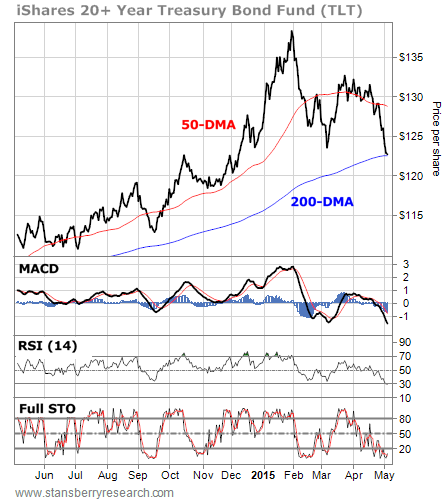 As you can see from the chart, TLT rarely moves more than 4% or so away from its 50-DMA before coming on back toward the line. Currently, TLT is about 5% below its 50-DMA. So it’s extended to the downside and due for at least a short-term bounce.

TLT is also sitting right on the support of its 200-DMA. This is a logical place to expect a bounce.

And all of TLT’s technical indicators are at oversold levels that have previously marked short-term bottoms in the price of TLT.

As a technical trader, I’m looking for the Treasury bond market to bounce from the current oversold level. The question is… What will be the catalyst for that bounce?

As I said earlier, I believe we’ll soon see some event that causes investors to want to take risk off. It could be a sudden stock market decline… As I’ve shown you recently, the stock market’s technical picture looks toppy and high levels of New York Stock Exchange margin debt like we’re seeing today tend to precede market tops.

But it could also be renewed concern over Greece… or any of the other soon-to-be-bankrupt countries leaving the European Union. It could also be an unexpected political announcement or a flare-up in tensions in the Middle East.

The only thing we know for sure, at this point, is that investors have been taking on increasing levels of risk over the past few months. Eventually, something will happen to make them want to take some of the risk off. And that won’t end well for investors holding high-yield junk bonds.