Take a moment and think of what kind of business you’d have to run in order to not only pay out a dividend at all, but raise that dividend for 53 consecutive years.

You’d have to be running a very high-quality business, right?

After all, those dividend payments to shareholders are made in cash, and you can’t manufacture cash out of thin air, nor can you make it up on a financial statement. The cash has to be there in order for you to pay investors.

[ad#Google Adsense 336×280-IA]And in order to pay increasing dividends for more than five straight decades, you have to grow the business so that the cash flow can support a growing cash payout.

So just think of the consistency you’d have to manage for decades on end in order to generate the increasing cash flow at the business level in order to fund rising cash dividends to shareholders.

There’s a high-quality company out there that has done just that.

And the odds seem incredibly good that this company will continue growing and paying out an increasing dividend for years to come.

That’s because this company manufactures, markets, and sells ubiquitous products in an industry that is very likely only going to continue growing.

Healthcare, which is set to grow because of an aging baby boomer generation, an increase in the average lifespan, industry reform, and a growing global population.

And then there are pharmaceuticals like Remicade, Simponi, and Stelara.

This company is Johnson & Johnson (JNJ).

Founded in 1887 and now operating via 265 subsidiaries across 60 countries, they are the world’s largest and most diverse healthcare company.

They operate through three segments: Pharmaceutical (44% of fiscal year 2014 sales), Medical Devices And Diagnostics (37%), and Consumer (19%).

Johnson & Johnson is a very large company – the market cap is currently north of $278 billion. However, they’ve managed to continue growing at a rather attractive rate over the last decade.

These rates aren’t particularly strong by themselves, but JNJ was bogged down by large and costly recalls during 2011 and 2012. They’ve since bounced back rather strongly.

S&P Capital IQ expects that EPS will compound at an annual rate of 7% over the next three years, which seems reasonable and attainable.

Now, JNJ’s dividend record is one of the strongest around. As aforementioned, they’ve increased their dividend for more than five consecutive decades. That easily qualifies them as a “Champion” on David Fish’s Dividend Champions, Contenders, and Challengers list – a list that contains information on more than 700 US-listed stocks with at least five consecutive years of increasing dividends.

Over the last decade, they’ve increased their dividend at an annual rate of 9.7%.

That rate is higher than that which earnings per share has grown, but the payout ratio is still a very reasonable 53.7%.

And the yield right now, which stands at 2.99%, is fairly attractive in this market and low-rate environment.

Truly fantastic dividend metrics across the board here, which explains why this is the largest single holding in my Freedom Fund.

JNJ also maintains a spectacular balance sheet, which is just one more very attractive aspect for this stock.

The long-term debt/equity ratio is just 0.22 and the interest coverage ratio is north of 39. Fantastic numbers here showing that JNJ has no issues with debt or financial flexibility.

When someone speaks of high-quality companies, JNJ should be used first and foremost as a shining example.

The company just reeks of quality across the board. Consistently increasing top line and bottom line, responsible leverage, fantastic profitability, and the ability to hand out bigger checks to shareholders for more than five straight decades.

And demographic trends favor this company and others like it with an increasing share of the population taken up by the baby boomer generation, people that are living longer than ever, healthcare reform making access to healthcare easier than ever, and a growing global population. In addition, middle classes around the world are rising up, and these people are going to need access to high-quality healthcare and the types of products that JNJ manufactures.

However, there are risks that should be considered. Product recalls and litigation can not only harm the company’s reputation, but also cost the company money. There’s also omnipresent regulation in the industry. Competition is an additional risk, as is patent loss. Finally, the company operates across the world, so there are currency risks to consider.

This stock appears attractively valued right now with a P/E ratio of 17.96. That compares well not only to the broader market, but also JNJ’s own five-year average, which is similar.

I valued shares using a dividend discount model analysis with a 10% discount rate and a 7% long-term dividend growth rate. That growth rate appears fair when considering the moderate payout ratio, historical dividend growth rate, and forecast for future EPS growth. The DDM analysis gives me a fair value of $107.00. That means shares could be up to 7% undervalued right now. 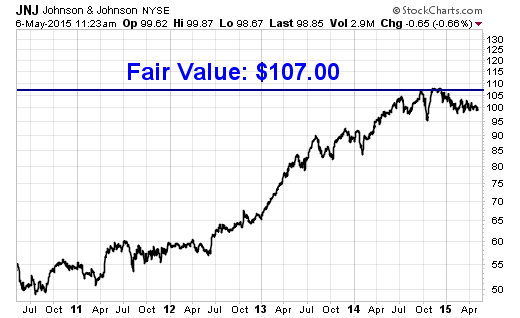 Bottom line: Johnson & Johnson (JNJ) is the world’s largest healthcare company, operating in an industry with incredible tailwinds that should continue to benefit the company for years to come. With a yield near 3% and dividend raises for more than five consecutive decades, this stock is about as high quality as it gets. I’d strongly consider this stock for its safety, quality, and valuation right now.