In what is feeling more and more like an overbought market, I have been slowly allocating additional funds to some of the domestic automakers over the past six months.

[ad#Google Adsense 336×280-IA]And second, dominoes seem to be falling into place that make some of the domestic vehicle manufacturers more and more attractive on an earnings growth basis.

Our automakers are making big inroads in China through joint ventures which is a crucial earnings growth driver.

Also, they are showing good sales growth and are taking market share from Japanese players.

This is critical as the Middle Kingdom is already the biggest auto market in the world and this designation will only increase as millions and millions more Chinese become part of the burgeoning middle class on an annual basis.

Second, the fall in gasoline prices since last summer is a major profit driver worldwide but especially in the United States. As gas prices drop, the overall sales mix coming from trucks and SUVs increases. It is currently at the highest level since 2005. This is important as trucks and SUVs have many times the profit margins than mid and small cars provide. This will boost earnings and margins in coming quarters.

Finally, quantitative easing efforts just initiated in Europe are starting to bolster the auto market there just like they did in the United States when initiated in 2009. March auto registrations in what had been a moribund market for years were up 10% year-over-year. Although this trend will not push domestic automakers into the black on the continent, it should lessen the losses from their European operations, thus bolstering their bottom lines. 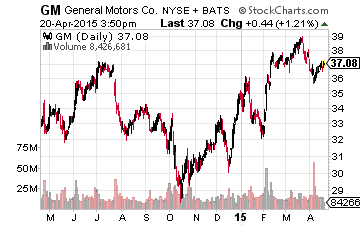 My top pick in the sector remains General Motors (NYSE:GM) even as the stock has gained some 15% since being included in the Turnaround Stock Report portfolio late last year.

The shares still have plenty more upside over the next 12-18 months.

In addition, the automaker is seeing very healthy average selling price increases domestically thanks to a shift to higher price trucks and SUVs. In China, General Motors is seeing monthly sales of approximately 300,000 vehicles through joint ventures. This includes some 100,000 Buicks, an all but dead nameplate in the States. GM and its joint venture partners plan to invest some $16 billion over the next five years to maintain and expand its impressive market share in this critical market.

The company is continuing to put the ignition switch recall, which dominated headlines in 2014, behind it. It just received a favorable court ruling that should keep the compensation issued to settle claims within a reasonable range. I also expect GM to settle any regulatory and litigation actions from the government by the end of the year.

Best of all, the stock has an impressive earnings trajectory. Profits should be up better than 40% year-over-year in FY2015 and another 10% to 15% gain is penciled in by the consensus for the next fiscal year. Even with the recent rally over the past several months, the stock goes for just under eight times next year’s profit projections. Few stocks have that sort of valuation and carry nearly a four percent yield. The shares are very cheap compared to the overall market. 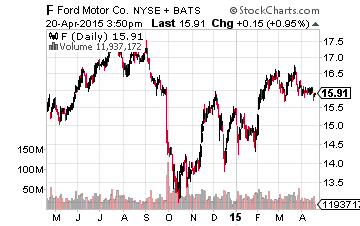 Next up is Ford (NYSE:F), another automaker that yields almost four percent (3.8%).

Earnings were down in FY2014 as the company geared up for its most ambitious global launch schedule in its over 100 year history as a company.

These new models are led by its critical F-150 series line which is the first production truck in history to sport an all-aluminum body.

The F-150 has traditionally been the highest selling truck model domestically and the new models are garnering rave reviews. With Ford’s technology two years ahead of any competitors in the space, look for ramped up sales of these trucks to be a critical profit driver for Ford in the years ahead.

Ford is a prime beneficiary of the improving auto market in Europe. Its first quarter auto sales on the continent were up better than 12% year-over-year and the company also gained market share in Europe during the quarter. Although a later player in China than General Motors, the company is making up for lost time. Sales there are up almost 15% year to date, with Ford now selling over 100,000 vehicles a month through joint ventures, and the automaker just passed Kia in market share in the country.

Thanks to a robust launch schedule, earnings and revenues are projected to increase this year. Launch costs such as refurbishing plants and marketing expenses should also drop. Earnings should be up 25% to 30% year-over-year in FY2015 and 15% to 20% in FY2016 according to the current consensus. Ford shares go for just over eight times next year’s earning; about half the overall market multiple in addition to its juicy dividend yield.

A lot of sectors within the market look overstretched on a valuation basis at the moment. These automakers stand out for their growth, yield and valuations in an industry whose business fundamentals are on the upswing at the current time.