And if you’re buying foreign stocks – even with exchange-traded funds (ETFs) – these currency moves affect your returns.

They could be a major tailwind, which adds to your profits… or a significant headwind.

[ad#Google Adsense 336×280-IA]Either way, you need to know what you’re dealing with.

And the recent volatility in the currency markets provides us with some extreme examples.

Consider the case of a U.S. investor who bought European stocks last year…

The Euro STOXX 50 Index is the leading blue-chip stock index in the Eurozone.

You can see in the chart below that most of these gains have come since the European Central Bank announced a massive, €1 trillion bond-buying program. 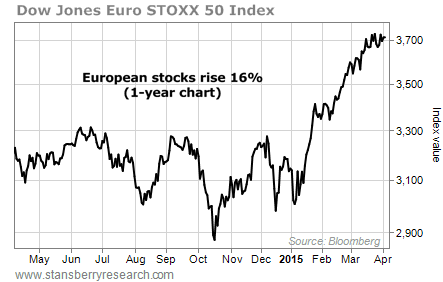 European investors who bought an index fund on a local exchange are up 16%… And you might expect the same for a U.S.-based investor.

But take a look at the one-year chart of the popular SPDR Euro STOXX 50 Index Fund (FEZ)… which trades on the New York Stock Exchange. You see a very different picture. It shows the fund is down 8% in the last year (not including dividends). 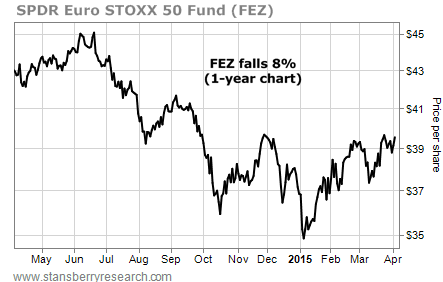 Why do the charts look so different?

The reason for the difference is the change in the exchange rate. The euro has fallen 21% against the U.S. dollar over the last 12 months… from about $1.37 per euro down to about $1.09 per euro. It’s an enormous move for a major currency. 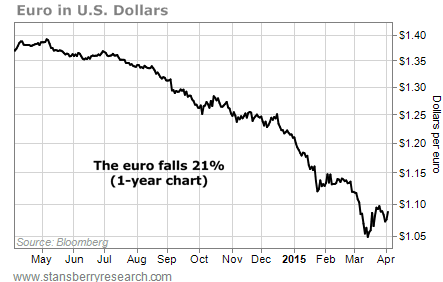 As you can see, currency moves can cause major effects on your investments and trading positions. What might have been a 16% gain was instead a 5% loss to the U.S. investor who bought European stocks last year.

So what do you do if you want to own foreign stocks today?

It depends on your currency outlook. If you think the currency of the country you’re investing in is going to strengthen against the dollar, normal “unhedged” foreign stocks or ETFs are great. If the dollar falls and European stocks climb, for example, FEZ will show you gains from both moves.

The currency effect I showed you will give you some leverage on your trade.

But if you think the dollar is going to get stronger – or you don’t want to think about currency moves – you should consider an ETF that hedges against currency risk. There are lots of funds out there now that give you exposure to foreign stocks and negate the gains or losses from currency moves.

Here are some of the bigger foreign ETFs… Both funds with currency hedges and without.

After an enormous run higher, the dollar has recently peaked. And in the short term, I expect it to continue to pull back. That will act as a tailwind for the unhedged ETFs. But over the long term, there’s a good case for a stronger dollar… and you’d be better off with the hedged ETFs.

Most people don’t understand this idea… They don’t know how currencies can affect their trading. But understanding the effects of currencies gives you an extra level of control over your trades… And it can boost your profits.