There are a few things in this world that we can be sure of.

Death and taxes are most often cited.

But what about eating?

Yeah, you read that correctly.

I love to invest when the odds are on my side. And I also love investing in companies that provide products and/or services that are ubiquitous.

[ad#Google Adsense 336×280-IA]Well, what can be more ubiquitous than food?

And what are the odds that people are going to continue eating?

It seems like a pretty good idea to invest in those companies that provide something as ubiquitous and necessary as food, right?

But I’m not saying we should invest in just any company that provides any kind of food.

Rather, I recommend investing in companies that provide a branded product and experience. In addition, differentiating oneself through value and/or quality is also extremely important to stand out and build an economic moat around the business.

McDonald’s Corporation (MCD) is such an example.

We’ve all heard about MCD’s troubles lately: increasing competition, food that millennials don’t identify with, a menu that has gotten way too large, slower service compounded by the aforementioned expanding menu, and marketing issues.

However, what people possibly fail to recognize is that this is still a global juggernaut with over 36,000 franchised and company-owned restaurants across the world. They’re so incredibly large that their revenue is more than double their closest competitor in Yum Brands, Inc. (YUM).

And it’s not like “nobody” is eating at McDonald’s anymore. $28 billion in revenue doesn’t just materialize out of thin air.

So people are still eating the food that MCD serves up. Sure, they haven’t grown as fast over the last few years as they did during their epic run from 2004 to 2011, but they may suffer just as much from a size issue as a food issue, as it’s difficult to grow as fast when you’re sporting over 36,000 restaurants.

But the size that may be their Achilles heel is also what gives them incredible competitive advantages. Their network provides them unparalleled distribution capabilities and massive economies of scale. Furthermore, their ability to provide a consistent product across massive regions gives customers a desirable effect.

So let’s see what kind of growth MCD has managed over the last decade, which includes that recent slower-growth period since 2011.

Earnings per share increased from $2.04 to $4.82 over this period, which is a CAGR of 10.02%. The bottom line was helped immensely by a combination of improving margins and a significant reduction of the outstanding share count.

Not bad for a business with so many “issues”, right?

S&P Capital IQ is calling for 7% compound annual growth for EPS over the next three years, which seems realistic. That’s still a pretty attractive rate, if a bit slower than what we’ve seen over the last decade.

Now, I’m a dividend growth investor. That means I invest solely in high-quality companies that not only pay dividends to shareholders, but also have track records of regularly increasing those dividend payouts. You can see evidence of this by looking at my publicly tracked portfolio.

And in this regard, McDonald’s is a fantastic dividend growth stock.

First, they’ve raised their dividend for the past 39 consecutive years.

That easily qualifies them as a “Champion” on David Fish’s Dividend Champions, Contenders, and Challengers list, which tracks more than 600 US-listed stocks that have increased their respective dividends for at least the last five consecutive years.

Second, they’ve increased that dividend at an annual rate of 19.6% over the last decade.

That rate of growth is obviously significantly higher than the rate at which underlying profit has grown, which is why the payout ratio has grown to its current 70.5%.

That’s fairly high, so future dividend growth will be hampered accordingly – the most recent dividend raise was less than 5%.

But what this stock might lack in dividend growth over the near term, MCD makes up for in the form of a yield of 3.47%. That’s a very attractive yield in this market, especially coming from a blue-chip like McDonald’s.

One area of the business to look out for, however, is the leverage. MCD, like a lot of other companies, has taken on long-term debt over the last few years to take advantage of the low interest rates. But this has deteriorated the quality of the balance sheet to some degree.

The long-term debt/equity ratio is 1.17, which is a bit high. Although, the interest coverage ratio is still healthy at over 13.

MCD’s profitability – especially margins – compares well to any competitors. The company posted net margin of 17.34% last fiscal year and return on equity of 32.97%.

So we can see that some of the concerns over MCD’s viability are probably a bit overblown. Though growth has slowed markedly over the last few years, the company is still posting huge numbers across the board. After all, we’re talking about a company that generates more than $4 billion in free cash flow per year.

Meanwhile, the company’s in a great position to turn things around. They’ve already outlined some changes which would include faster decision-making at the regional level, digital/mobile ordering and payment, and a more streamlined menu that could offer greater customization and innovation. Any positive changes can be greatly amplified by the very nature of their massive clout and exposure across the entire globe.

They’ve also been active in marketing and improving food quality. A recent initiative involving now only sourcing chickens raised without antibiotics identified as important to humans is a positive move in the right direction. The company also announced it’s going to stop buying milk from cows treated with artificial growth hormones.

In addition, the company brought on a new CEO, Steve Easterbrook, after former CEO, Don Thompson, stepped down on March 1, 2015. The change in management could be a positive catalyst, as Thompson oversaw a good portion of the recent decline in the company’s operations.

However, the risks they face are real. Competition has never been greater, as fast-casual chains have been particularly aggressive on pricing and marketing as it pertains to customer perception of food quality. In addition, it’s more difficult to grow from the large base that MCD now sports, relative to a smaller, more nimble chain.

Looking at the valuation, the P/E ratio for MCD is 20.31 right now. That seems elevated in comparison to the five-year average of 17.4. It seems that investors might be optimistic about new management, but the risks and recent operational history seems to warrant a discount that isn’t currently present.

I valued shares using a dividend discount model analysis with a 10% discount rate and a 6% long-term growth rate. That rate seems conservative at first glance, but it’s actually in line with recent dividend raises. In addition, I’m considering the high payout ratio and lack of profit growth since 2011. The DDM analysis gives me a fair value of $90.10, which is more than 7% lower than the current stock price. 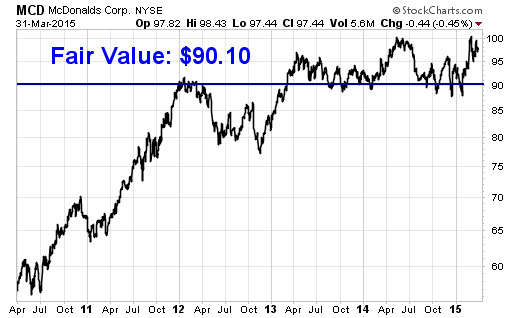 Bottom line: McDonald’s Corporation (MCD) is an iconic blue chip. They’ve shown resiliency over the course of decades and have been rewarding shareholders with rising dividends over that period as well. However, recent stumbles and increased competition have put some chinks in the armor. But we have to remember that food is ubiquitous and McDonald’s sells a branded product that is still selling well across the entire world. That said, shares appear a bit rich here. I’d exercise caution here on shares, perhaps waiting for a better opportunity.