First, dividend growth stocks are those you can find on David Fish’s Dividend Champions, Contenders, and Challengers list.

Mr. Fish’s invaluable document contains pertinent information on almost 700 stocks that have all increased their respective dividends for at least the last five consecutive years, many with decades of such increases.

They’re also the kind of stocks you’ll find in my portfolio since I put my money where my mouth is.

[ad#Google Adsense 336×280-IA]But while focusing on quality and those companies that have lengthy track records of increasing dividends is a cornerstone of my investing strategy, it’s just as important to look at valuation and not overpay for stocks – even high-quality ones.

The major reasons I look for stocks that are priced below their intrinsic value is to limit risk and increase potential returns.

One limits risk when they pay less for stocks since you put the odds in your favor.

If one estimates a stock’s intrinsic value at $80 but pays $60, you create a huge margin of safety there in case your estimate is off. At that point, you could be off target by 25% and still not lose any money.

Thus, you increase the potential of your returns as well since if you’re even somewhat correct it’s likely the market will eventually recognize the value of that stock and reprice it accordingly. In addition, since yield and price are inversely correlated, you’re increasing your passive dividend income which can increase your compounding over the entirety of your investment.

Dave Van Knapp actually published a helpful tutorial on how to go about estimating a stock’s intrinsic value, which is recommended reading if you’re unfamiliar with valuing stocks.

As I mentioned at the outset, I’m always on the lookout for a high-quality dividend growth stock that is undervalued.

And it appears I may just have found one.

Aflac may not come to the forefront of one’s mind when looking for a high-quality dividend growth stock, but Aflac definitely brings the goods.

First, they have increased their dividend to shareholders for the past 32 consecutive years. That time frame includes multiple wars, massive inflation, and the financial crisis. Yet Aflac keeps on handing out the dividend raises.

And the dividend increases aren’t exactly small – the 10-year dividend growth rate is a stout 14.6%. Though, recent increases have been more modest.

The stock currently yields a fairly attractive 2.45%, which is covered by an excellent payout ratio of just 24%.

So we’ve got a very healthy yield and a dividend that’s not only growing at a solid rate, but also very likely to continue doing so.

But in order to really get a feel for what we can expect in terms of dividend growth moving forward we’ll want to take a look at the underlying growth of the company. This will also be immensely helpful in terms of valuing the stock.

Meanwhile, Aflac grew earnings per share from $2.92 to $6.50 over this period, which is a CAGR of 9.30%. Really quite impressive, especially considering that Aflac has been negatively impacted by currency concerns lately.

S&P Capital IQ anticipates that EPS will compound at a 5% annual rate over the next three years, citing continued concerns with currency (approximately 80% of Aflac’s business is in Japan).

The company maintains an excellent balance sheet, which is common for an insurer. The long-term debt/equity ratio is 0.29 and the interest coverage ratio is just over 15.

Aflac’s profitability is outstanding. Although the company doesn’t really have any direct peers due to its unique offerings and structure, the numbers are pretty much as good as you’ll find. They posted net margin of 12.98% and return on equity of 17.90% last fiscal year.

One still needs to worry about currency effects with a weak yen and strong dollar. In addition, Aflac still has exposure to some stressed European sovereign debt. However, the company is growing at an attractive clip, the yield is healthy, and the dividend is well-covered by earnings.

But are shares really a good deal here?

The stock is trading hands for a P/E ratio of 9.81 right now which is low in both absolute and relative terms. That’s almost half the broader market’s ratio, as well has lower than AFL’s five-year average of 10.4.

If the stock is cheap, how cheap is it? What should we pay?

I valued shares using a dividend discount model analysis with a 10% discount rate and a 7.5% long-term growth rate. That growth rate is well below Aflac’s growth in earnings per share and also below the 10-year dividend growth rate, which should build in a margin of safety. In addition, the payout ratio is incredibly low.

However, recent dividend raises have been somewhat small and the forecast for future earnings is also low due to currency concerns. All in all, though, the company appears more than able to sustain this kind of dividend growth moving forward. The DDM analysis gives me a fair value of $67.08.

Looks like I’m coming up with a value that indicates that shares are undervalued here, but let’s see what some of the analysts out there think of AFL’s valuation.

Morningstar rates AFL as a 3-star stock, with a fair value estimate of $69.00.

So it appears that I’m not alone. Averaging out the three numbers to come to some kind of consensus gives us a fair value of $71.99. That means shares are potentially 13% undervalued right now, which could be an incredible opportunity in an otherwise stretched market. 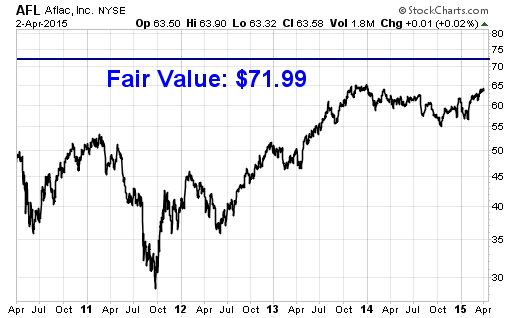 Bottom line: Aflac Incorporated (AFL) has been increasing its dividend for more than three decades straight and there doesn’t seem to be anything on the horizon that will stop that streak from continuing. A low payout ratio, attractive yield, and strong underlying growth all foreshadow potentially strong shareholder returns over the long term. While there are risks here, the shares appear to be pricing in some of that with the possibility of 13% upside. I’d strongly consider Aflac here.