Things are getting worse in the oil sector…

As regular readers know, the price of oil has tumbled over the past few months. The benchmark West Texas Intermediate (WTI) crude oil price is down 56% since its peak in September 2013.

The decline in the price has sent oil stocks plunging. For example, the Energy Select Sector SPDR Fund, which holds a basket of major oil stocks, peaked in June 2014. Since then, the fund has fallen 24%.

So far, 2015 has been tougher for oil companies than last year.

That’s why the average price of WTI crude oil in the fourth quarter of 2014 was still $73 per barrel.

But this year, oil prices have started out low… and stayed low.

It’s almost impossible for oil companies to produce oil profitably at these prices. Companies are scaling back on new drilling and slashing jobs. But for some oil companies, cutting back production and costs isn’t going to be enough to survive.

According to consensus analyst estimates, Whiting will generate $1.7 billion in EBITDA (earnings before interest, taxes, depreciation, and amortization) this year. That’s down from $2.1 billion last year… a 20% fall.

With earnings falling and having to pay interest on its debts, Whiting’s free cash flow is negative. In short, Whiting will spend more than it brings in the door this year. The company has had negative cash flow in the past, but it was always able to rely on rising oil prices to bail it out. It can’t do that this time around.

To keep the lights on and meet its debt payments, Whiting must now raise money. In a recent press release, the company announced it will issue more debt and sell about 40 million new shares in a secondary stock offering.

That’s like the anti-dividend for shareholders. Instead of paying shareholders money, it is creating new shares that actually make existing shares worth less.

If a company is like a pie, then shares are slices of that pie. In order to issue more shares, the company must recut the pie, stealing a tiny bit from all the existing slices. That’s bad news for Whiting shareholders.

As you can imagine, the market wasn’t impressed. 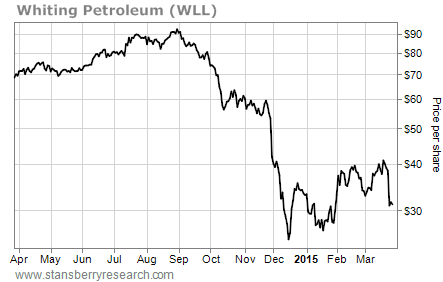 Whiting’s share price fell 19% on the news. It’s now down a massive 65% in just six months.

And Whiting isn’t the only oil producer with high levels of debt. Take a look at the table below…

The above companies all have massive amounts of debt compared with their market value. To put this in perspective, Whiting’s debt-to-market-cap ratio is only 1.1.

Halcón Resources has the second-highest debt-to-market-cap ratio on this list. But the company hedged its oil production (locked in the price of its oil and gas for a set time in the future) at higher prices, so it will be able to pay its debts this year.

But most of the companies on this list aren’t that lucky or prepared. And if oil prices continue to stay low, they’ll struggle under their debt payments.

I’m not saying these companies are in danger of going bankrupt. But they’re more vulnerable to low oil prices right now.

You see, while debt can be useful to companies during good times, it can be destructive during bad times. When a company takes on too much debt, it must divert a large portion of its earnings to pay the interest.

In some cases, a company has to take on new debt to pay for debt coming due – so it continues to pile up more debt. Other times, like with Whiting, a company will issue new shares to cover its expenses. None of these things are good for shareholders.

In short, shareholders of the above names are likely to take a backseat to these companies’ debt payments in the months ahead. That’s why I recommend avoiding these stocks right now.