The dollar rally is over… at least for the short term.

For the past eight months, the U.S. Dollar Index has been on fire – rallying from a low of 80 last July to a high of more than 100 early last week. That’s a remarkable 25% gain for a currency.

And up until last week, most folks thought the gains would continue.

[ad#Google Adsense 336×280-IA]You couldn’t watch the financial networks for more than a few minutes without some talking head commenting on the strength of the dollar.

After all, with the Federal Reserve expected to increase interest rates this year while almost all other central banks are expected to decrease rates, money is going to flow to where it’s treated best.

The dollar should strengthen while other currencies weaken.

So currency traders piled into the long dollar/short euro trade in record numbers over the past couple of months. But as we warned, the market usually doesn’t reward popular trades. And traders got a nasty surprise last week…

The dollar index rallied last Wednesday, prior to the Fed’s announcement on interest rates. But the buck reversed hard as soon as the statement came out. The dollar index ended the day down almost 1.5% – a huge move for a currency.

The buck bounced a bit last Thursday. But the selling resumed Friday and Monday. The dollar is now down around 3% from last Tuesday’s highs. And it looks poised to fall even more. 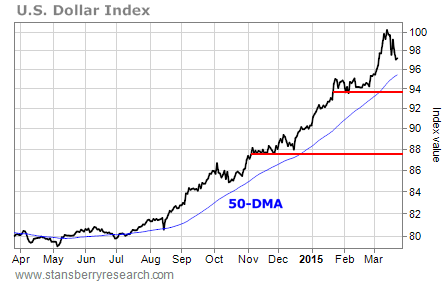 In the big picture, the pullback of the past week doesn’t look like much. The dollar index is still up more than 20% since last July. But this is the biggest pullback we’ve seen in the dollar since the rally started eight months ago.

The action isn’t at all like the high-level consolidations we saw in November and February when the dollar got a bit too extended. Back then, traders were using even the slightest weakness in the dollar as a chance to buy. So the price held firm. The dollar chopped back and forth for a few weeks and gave the 50-day moving average (DMA) a chance to catch up to it.

The action today is different.

Traders aren’t stepping up to buy the buck on weakness. Given the hard selling pressure on Friday and Monday – following last Thursday’s bounce attempt – I’d say traders are looking to sell into strength.

This is the sort of action that can lead to a “rush for the exits” – where everyone tries to get out of a crowded trade all at once. If that happens, then we could see a quick drop down to the first support line at about 94. If things get particularly nasty, the dollar index could fall all the way back to 88 or so.

Even a decline of that magnitude, though, won’t derail the longer-term bullish picture for the buck. So analysts who are calling for the dollar rally to continue through next year and longer can still be proven correct.

But for the short term – meaning the next several weeks – it looks like the dollar is headed sharply lower.