Uranium is breaking out…

But one of the world’s leading uranium producers hasn’t benefited from the rally so far. And it could be a great opportunity for speculative investors…

And many uranium stocks soared hundreds – and in some cases, thousands – of percent.

But Japan’s Fukushima nuclear power plant disaster in March 2011 helped turn the boom to a bust. Japan, one of the world’s largest consumers of nuclear power, shut down its fleet of power plants and sold its stockpiled uranium into the market after the disaster. 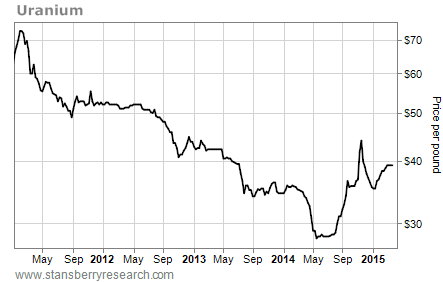 The price collapse took uranium stocks with it. Many fell 80% over the same period.

Uranium prices were so low last year that most uranium producers couldn’t make money. This caused many miners to cut production.

But demand for uranium has been increasing. The world still needs nuclear power. It generates about 20% of the U.S. electricity supply.

Nuclear power is even more important to emerging markets.

To continue to develop, these markets need sources of low-cost electric power. That’s where nuclear energy comes in. It’s a key component to these markets’ future energy plans. And it will provide a huge source of demand for uranium for decades.

Cameco (CCJ)– one of the leading uranium producers – expects annual consumption of uranium to grow from 155 million pounds to 230 million pounds by 2024. This is a nearly 50% jump.

In anticipation of increasing low-cost electric power demand, emerging markets are starting to build the infrastructure for nuclear power.

The World Nuclear Association (WNA), an industry trade organization, says there are currently 69 nuclear reactors under construction in the world (many in China). Another 184 are in the planning stage. Most of these should be in operation within eight to 10 years. And another 312 plants are proposed.

The 2013 WNA Market Report estimates 272 new reactors will come online by 2030 (while just 74 will close). There are currently only 438 plants in operation, so this would be some serious growth.

When these plants are fully operational, it’s unclear how the industry will supply the increased uranium demand. Current production isn’t sufficient.

The higher uranium prices recently suggest the market is beginning to appreciate this imbalance. But one of the world’s leading uranium producers hasn’t benefitted yet.

Cameco produces about 15% of the world’s uranium from its mines in Canada, the U.S., and Kazakhstan. It owns several trophy mines – including the world’s largest uranium-producing mine… the world’s second-highest grade deposit… and the longest-operating uranium production plant in North America.

Given the big move we’ve seen in the price of uranium since last summer, you’d expect Cameco’s share price would have moved higher, too. But it hasn’t. Cameco shares are actually down 24% since uranium began its uptick in July. Take a look… 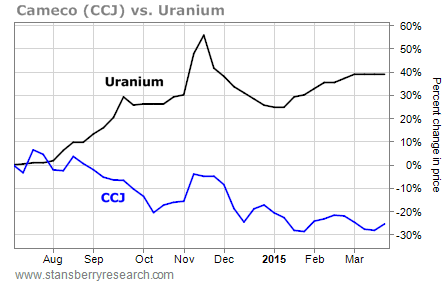 The reason shares have fallen doesn’t have anything to do with uranium.

Since 2008, Cameco has been fighting with the Canada Revenue Agency (CRA) about back taxes. In short, the CRA has accused Cameco of dodging taxes. But Cameco insists it has done nothing wrong. Cameco expects the matter will go to trial next year. If Cameco loses the dispute with the CRA, it could be on the hook for up to $1.5 billion of back taxes and penalties.

That’s a big number for a company with a market cap of $6 billion.

And the CRA isn’t the only one trying to get more revenue out of Cameco.

The U.S. Internal Revenue Service (IRS) is now demanding back taxes from Cameco, too. The IRS demand is much smaller, at around $32 million. But it’s another black eye for the company.

The uncertainty over the trial has caused investors to flee the stock. Remember, there’s nothing investors hate more than uncertainty.

But this could be creating a great opportunity…

As I explained above, things are improving in the uranium sector. And as a leading uranium producer, Cameco will be a big beneficiary of higher uranium prices. The only thing holding Cameco back is its tax problems.

Investors are already fearing the worst, so a big chunk of the potential penalties are priced into the stock. So any “less bad” news – including the company settling before trial – could send shares soaring.

Even if Cameco goes to trial and loses, shares could STILL head higher… The market has a way of rewarding certainty. And once a decision is made, the company’s cash flows would be more certain.

Cameco shares have recently moved higher. This is a good entry point for more speculative investors.