In early 2011, no one had heard of “bitcoin”… One bitcoin was worth less than a dollar.

But over the next three years, bitcoin exploded in popularity… and in price.

And everyone began searching for bitcoin on the web.

By December 2013, web searches for bitcoin peaked, based on data from “Google Trends.”

More folks were interested than ever before (or since).

Guess what happened after web searches for bitcoin peaked…

I’ll spare you the suspense. Bitcoin prices peaked that month. Take a look… 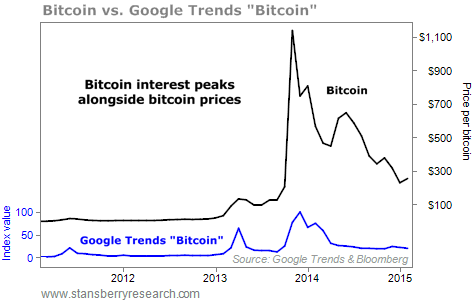 At bitcoin’s peak in search popularity, everyone who was interested in bitcoin had already bought.

Bitcoin prices had only one place to go… down. The value of bitcoins fell around 75% in a little more than a year.

The message is simple: When greed peaks… when popularity peaks… you’re usually near a peak in price.

For another example, take a look at Chinese stocks…

China had a bitcoin-like bull market in the mid-2000s. The entire market (the CSI 300 Index) soared 600% in a little more than two years. And of course, interest in Chinese stocks soared as a result.

Chinese stocks crashed by 70% over the next year. Take a look… 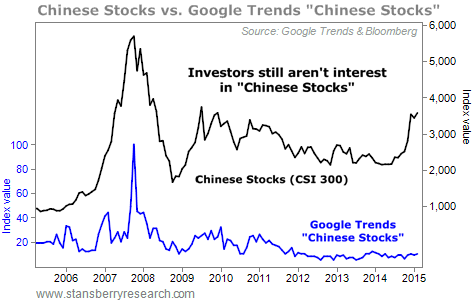 Just a few years ago, we didn’t have Google Trends data to learn from. But now, with our computer systems, we’re studying this data for trading opportunities… The results are promising so far.

The simplest thing I can tell you is, when we are at a peak of greed (like bitcoin in 2013 and China in 2007) or a peak of fear (like the Global Financial Crisis of 2007-08), Google Trends search results often peak.

One important thing to note today is the lack of interest in Chinese stocks by U.S. investors (as you can see in the chart above).

I’ve pointed out this opportunity in DailyWealth a handful of times in the last few months… Chinese stocks have soared so far. But that doesn’t mean the gains are over.

Are folks interested? Does everyone expect the gains to continue forever? That’s when markets peak.

The answer in China is “absolutely not!” No one is searching for Chinese stocks today, as you can see from the chart.

The opportunity in Chinese stocks is fascinating… China is in a rip-roaring bull market. But still, no one is interested (as the Google Trends charts help show).

We still like China right now. The Google Trends data is one way for us to see that U.S. investors have not fallen in love with Chinese stocks yet.

We have just begun our work with Google Trends data. But we like what we see so far. This won’t be the last time you see us mention it. Check out some search terms for yourself at Google.com/trends.