There are only so many products out there that are truly ubiquitous.

These are products that you see and/or personally use pretty much every single day.

But I have a hard time thinking up products more ubiquitous than beverages.

Think about it: when’s the last time you didn’t drink water, juice, coffee, tea, or soda?

People have to drink liquid of some kind. It’s a basic requirement to stay alive.

[ad#Google Adsense 336×280-IA]But what if you’re able to move past that and produce branded beverages that people actually enjoy drinking, and are willing to pay a premium for.

Well, there’s a company out there that took this idea and turned it into basically the perfect business model.

They probably need no introduction, but check this out: they offer more than 3,500 products across more than 200 countries worldwide. And they have twenty $1 billion brands.

Some of their leading brands include the iconic Coca-Cola, Sprite, and Fanta. But they also have major exposure to juices through Simply and Minute Maid; water through Dasani and vitaminwater, tea through Honest Tea and Gold Peak, and sports drinks through Powerade and Aquarius.

But it doesn’t just end there.

They also have exposure to the fast-growing energy drink market through a 16.7% stake in Monster Beverage Corp. (MNST).

And they’re capturing an early lead in the home brewing category with a 16% stake in Keurig Green Mountain Inc. (GMCR), whereby customers will have the ability to make Coca-Cola branded beverages at home through a cold beverage system.

So let’s take a look at what kind of results Coca-Cola has been able to deliver over the last decade, which will tell us a lot about where the company’s going. Much like a picture is worth 1,000 words, a financial statement is worth 10,000 words.

Meanwhile, earnings per share increased from $1.02 to $1.60 over this period, which is a CAGR of 5.13%. Not as impressive, primarily due to currency headwinds from a strengthening dollar as of late. However, there doesn’t appear to be any issues with the core business.

S&P Capital IQ anticipates that EPS will compound at an 8% annual rate over the next three years, which is actually more in line with their long-term average.

Now, where the company really shines is in the dividend metrics.

They’ve been increasing their dividend to shareholders for the past 53 consecutive years, which is one of the longer streaks in existence.

That includes multiple wars, massive inflation, the financial crisis, the Great Recession, monetary easing, and governments that have toppled across the world.

Yet, they continue to keep pumping out increasing dividends. That’s something shareholders should really appreciate.

The last 10 years have been really solid for dividend raises, with a 10-year dividend growth rate of 9.3%.

Now, the dividend has grown faster than EPS over the decade; however, up until recently that wasn’t the case. Recent strengthening of the dollar has had a rather outsized effect on reported results due to Coca-Cola’s large international presence.

The payout ratio is currently very high at 82.5%, but that seems to be more of a temporary concern due to the aforementioned currency headwind than a lasting issue with the core business.

The good news, however, is that the stock yields a rather high 3.25% right now. Not only is that attractive relative to the broader market, but it’s also well in excess of Coca-Cola’s historical average.

Coca-Cola maintains a pretty solid balance sheet. The long-term debt/equity ratio is 0.63 and the interest coverage ratio is rather high, at 20.31.

Profitability is also sound and compares well to the competition, though true “competition” is somewhat of a liberal term since Coca-Cola is pretty much in a league of their own. The company’s net margin has averaged 20.92% over the last five years, with return on equity of 29.26%.

There’s just a lot to like here. Recent growth has been constrained by the strong dollar, but the core business is still fantastic. It would be just about impossible to replicate Coca-Cola’s global brand portfolio, marketing, distribution network, and economies of scale, even if someone were to come up with $175 billion (Coca-Cola’s market cap) to attempt it. Thus, their economic moat is as wide as it gets.

And their exposure to emerging markets continues to be a growth catalyst for the future.

While there’s this assumption that sparkling beverages – where the company still derives the bulk of their revenue – are dying, but the company actually reported an increase in volume across sparkling, which includes their main brand, Coca-Cola. Even better, however, volume for still beverages was up 4% for fiscal year 2014, driven by growth in ready-to-drink tea, sports drinks, and bottled water.

There are some risks, however, that investors should keep in mind. Primarily, the market for beverages is heavily competitive. In addition, the strong dollar could continue to plague the company for an undetermined period of time.

Looking at the valuation, it appears expensive at first glance. The P/E ratio is 25.50 right now, which is expensive even for a high-quality blue chip like Coca-Cola. Moreover, the five-year average is only 18.6. But that ratio appears to be temporarily skewed by recent weak earnings on the back of the strong dollar.

I valued shares using a dividend discount model analysis with a 10% discount rate and a 6.5% long-term growth rate. That rate appears reasonable when looking at Coca-Cola’s long-term growth in the dividend and EPS, factoring out recent currency anomalies. And the most recent dividend raise – announced in mid-February – was 8.2%. The DDM analysis gives me a fair value of $47.08. 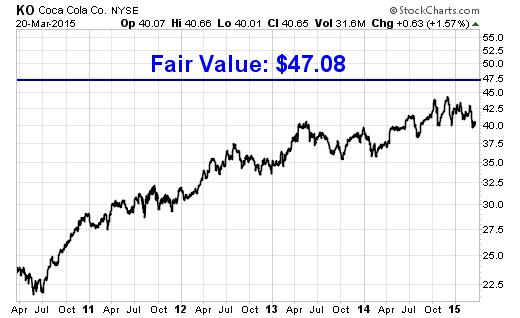 Bottom line: The Coca-Cola Co. (KO) provides some of the most ubiquitous branded beverages in the world, and the odds seem high that people will continue to buy these products and consume them. And while there are concerns over the future of sugary sodas, Coca-Cola’s exposure to multiple types of beverages should help buoy the company over the long term, even factoring in short-term currency issues. Meanwhile, fear seems to be keeping shares cheap, as the stock offers potentially 16% upside right now. This blue-chip stock should definitely be on your radar right now.