Wouldn’t it be nice if every stock quote completely and accurately represented that respective stock’s intrinsic worth?

However, that is absolutely and definitely not the case.

Price and value are not necessarily synonymous with one another, and at times can actually be quite far apart.

[ad#Google Adsense 336×280-IA]And that’s because stocks are priced based on all kinds of things that aren’t 100% accurate – supply and demand, investors’ emotions, electronic trading, attempts to forecast the future, etc.

But the good news is that there are tools out there to help you decipher the difference between price and value, like Dave Van Knapp’s stock valuation tutorial.

It’s important to always keep in mind that the price you’re paying may not, and probably won’t, represent fair value.

And the reason why that’s important is so that you don’t overpay.

See, stocks change in price every second of every trading day. It’d be like going into your grocery store and seeing the price on a loaf of bread change every second right in front of your eyes. $2.05, then $2.09, then $2.02. But what if you come back tomorrow and it’s $1.98? Better deal, right? Absolutely, but the key is to know what that bread is worth in the first place, which is where the tutorial above becomes valuable.

I keep this in mind with every stock I purchase, which is partly how I was able to amass a portfolio nearing $200,000 in value on a modest salary in just five years.

But I also focus on quality, which is why I stick to David Fish’s Dividend Champions, Contenders, and Challengers list – a list that features every US-listed stock that has increased its respective dividend for at least the last five consecutive years – when looking to purchase stocks.

I recently found a stock on Mr. Fish’s list – it can also be found in my portfolio – that appears to be priced below its intrinsic value.

And I’m going to share that name with you readers today.

General Electric Company (GE) is a diversified industrial conglomerate and financial services company that manufactures and offers a range of products and services.

GE is an age-old company, with roots going back to J.P. Morgan and Thomas Edison – titans of their respective industries – in the late 1800s.

But the company has come a long way since those early days – it serves customers in more than 100 countries and offers products ranging from locomotives to wind turbines to aircraft engines.

However, it has had some troubles as of late, stumbling mightily during the financial crisis due to having an outsized portion of the business exposed to its financing arm, which itself ended up exposing itself to subprime lending and financial losses.

But the ship is turning, slowly but surely.

Now, GE doesn’t have the lengthy dividend growth streak I usually look for. And this is because the company had to cut its dividend during the financial crisis. However, it’s back on track since then, with five consecutive years of dividend raises under its belt.

And the three-year dividend growth rate is more than respectable, at 14.9%.

Moreover, the yield on this stock – 3.63% – is extremely attractive right now.

That yield is backed by a moderately high payout ratio of 60.9%.

We’ll take a look at GE’s growth over the last decade, but keep in mind that the company has been restructuring heavily lately so as to expose itself considerably less in the future to its financing division. These results – especially the more recent – will help us value the business.

Meanwhile, earnings per share growth shows a similar pattern, going from $1.54 to $1.50 over this period. However, since fiscal year 2010 the company has steadily improved EPS from $1.06 to $1.50. That’s a compound annual growth rate of 9.07% over that five-year stretch.

S&P Capital IQ is forecasting 7% compound annual growth for EPS over the next three years, which would be more or less in line with recent results.

The company’s balance sheet is stressed, though it has improved markedly over the last few years. The long-term debt/equity ratio is 1.56 and the interest coverage ratio is 2.82. I’m looking for both of these numbers to continue improving moving forward.

GE’s profitability is solid, though not outstanding. The company’s net margin has averaged 9.73% over the last five years, with return on equity of 11.76%. Both of these numbers have also been improving as of late.

So we have a company that was once one of America’s best, but fell into some tough times during the financial crisis. The good news is that operations are improving and the company is slowly reducing exposure to more risky and cyclical financing operations.

GE’s P/E ratio is 16.74 right now, which is below the broader market by a good margin but more or less in line with GE’s five-year average.

So what should we pay for this stock?

I valued shares using a dividend discount model analysis with a 10% discount rate and a 7% long-term growth rate. This growth rate seems aggressive considering what the company has done over the last 10 years, but this seems to be an extraordinary period. Historically, GE has grown at an attractive level and more recent results seem to indicate they’re back on track. The DDM analysis gives me a fair value of $32.81.

It looks like my analysis concludes that GE is definitely undervalued here, perhaps significantly. But my opinion is but one of many. Let’s see what professional analysts think of this stock right now as it relates to the valuation.

Morningstar rates GE as a 4-star stock, with a fair value estimate of $30.00.

Well, I guess I’m not alone here on GE. If we average out all three numbers so as to come to a consensus, we get $29.84. That would infer that this stock is potentially 18% undervalued right now. 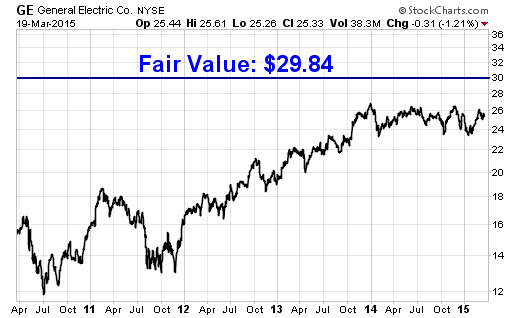 Bottom line: General Electric Company (GE) is one of the oldest American industrial firms around and, while they experienced some trouble during the financial crisis when getting away from their core competencies, the company is extremely well-diversified in terms of products, services, and geography. Shares appear attractively valued right now, as perhaps one of the best deals in the market. Meanwhile, you get a very attractive yield waiting for the stock to trade closer to its intrinsic value. I’d take a close look at GE right now.

Long-Term Investors Should Take a Look at This Stock

This Stock Has Plenty of Upside and is a Buy Today