Last month, I attended the World Money Show in Orlando…

The Gaylord Palms Resort & Convention Center was jam-packed with attendees interested in new ideas to make money. But the mood wasn’t pure revelry. I sensed that the audience was mainly worried about when the bull market will end and a bear market will begin.

That’s the question that needs to be answered. The economy is growing briskly… but is it booming – in the sense that booms lead to busts?

Not necessarily. Here’s why…

On a valuation basis, the market trades for about 18.5 times earnings.

That’s above average, but compared with previous peaks, it doesn’t indicate that a crash is imminent. 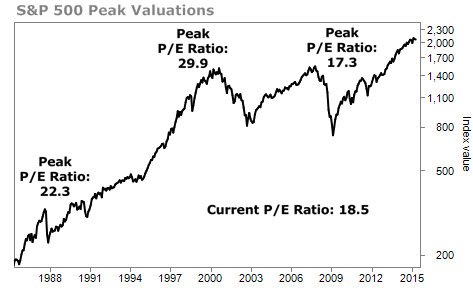 The reason why we will see more upside in the market is because corporate profits are booming. In the last quarter, the companies that make up the S&P 500 earned a total of $30.50 per share. The previous peak was $24.06 in the second quarter of 2007. So while stocks have risen 39% from that time, earnings have nearly kept pace by rising about 26.7%.

There is a cause for worry, though. The profit margin for S&P 500 companies is at an all-time high of about 10%, based on operating earnings per share. At a certain point, growing profit margins further gets increasingly difficult… even impossible. When we hit that point – and we may be close – we’ll need growing sales from a strong economy to keep corporate profits growing.

Investors attach a different level of risk to different areas of their portfolios. Some capital is allocated to high-growth opportunities. But many investors want the majority of their wealth in something extremely safe that still earns a yield. That’s why it ends up in government bonds or large-cap dividend-payers.

This is the story that’s driving today’s market… the flight to safe yield.

Investors are still shaken by the financial crisis of 2008. And right now, they are scared of the slow economy and debt problems happening in Europe. They are scared of Russian aggression. And they are watching defaults happen in Argentina.

That fear has led to investors bidding up high-quality stocks. And it has also led to negative yields on Swiss, German, Danish, Japanese, and other sovereign bonds. Investors desire safety so much that they are willing to take guaranteed losses on bonds.

We won’t be surprised if negative yields soon hit our shores.

Many have called for a bond bubble in the U.S. when rates eventually rise. It hasn’t happened. In fact, it has gone the opposite direction for years.

The next test for the U.S. market will be when inflation and wage growth show enough life for the Federal Reserve to increase its benchmark federal-funds rate.

At that time, we think massive demand for safe assets will keep rates – like the yield on 10-year U.S. Treasury securities – very low.

We also expect an interest-rate hike by the Fed could cause a short-term jump in Treasury security yields. But we think it will be short-lived.

Overall, this is a market of middles. Stocks aren’t much overvalued, but they should be approached with caution. Bonds are not in a bubble, but they don’t offer juicy yields right now, either.

This makes today a time for being careful with your asset selection. Don’t take any unneeded risks and stick to quality. High-quality assets don’t go out of style… especially when you can get them at a good price.