[ad#Google Adsense 336×280-IA]Instead, they finance lots of early-stage mining projects, then earn a revenue stream – or “royalties” – on mine production if things work out.

It means they can invest in great projects at discounted prices…

They go through big cycles of boom and bust. And gold has been in “bust” mode for the past few years. Since peaking in 2011, the price of the metal has fallen 38%. It’s down more than $100 per ounce in just the last month and a half.

The decline has caused many gold miners to struggle. And their share prices have plunged. The benchmark Market Vectors Gold Miners Fund (GDX) is down 70% since gold’s peak in 2011. 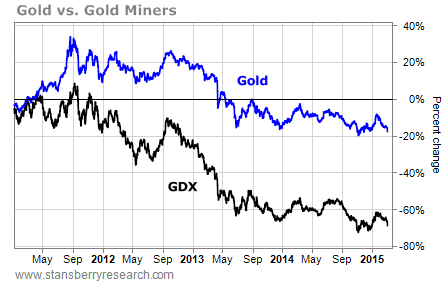 But one type of gold “miner” has outperformed the rest since 2011 – royalty companies.

As I said, royalty companies don’t actually operate mines. Instead, they own a percentage of a mine’s production. Once the mine is built, the royalty company typically gets a paycheck for the life of the mine.

The royalty business model shields these companies from swings in the price of gold more than regular gold miners. That’s why the three largest royalty companies are down an average of just 15% while many gold producers are down 70% since gold prices peaked in 2011. Some royalty companies, like giant Franco-Nevada (FNV), are even up since then.

You see, with low gold prices, many miners are strapped for cash. That means royalty companies are able to “buy low”… paying less for future royalties from mines. When gold prices increase, so will the value of their royalties. That’s why precious-metal royalties companies are ramping up investment in the gold sector.

“Right now, I want to use all our money,” David Harquail, the CEO of Franco-Nevada, said at last week’s Prospectors & Developers Association of Canada (PDAC) conference in Toronto.

The company spent $930 million in 10 transactions last year. The largest was a $650-million purchase of a gold-and-silver stream on producer Lundin Mining’s Candelaria mine in Chile last October.

Meanwhile, Stansberry Resource Report holding Osisko Gold Royalties (OR.TO) closed its purchase of prospect generator Virginia Mines in February. The merged company has royalties on two of Canada’s biggest mines. And now, the combined company can invest in bigger deals than each company would have been able to on their own.

And last month, royalty company Sandstorm Gold (SAND) announced it will buy royalty firm Gold Royalties Corp. for about $5 million. Sandstorm will get 18 royalties on 13 projects located in Canada as part of the deal.

I expect these types of deals to continue in the months ahead.