Interest rates are expected to go up later this year – for the first time since 2006!

This is striking fear into the hearts of investors.

(Specifically, the Federal Reserve is widely expected to raise short-term interest rates – something it hasn’t done since June of 2006.)

[ad#Google Adsense 336×280-IA]Most investors think that, when the Fed raises interest rates, asset prices (like stocks and real estate) have to fall.

It is true that the Fed will raise short-term interest rates at some point – possibly later this year.

However, this does not mean that stock prices have to fall… 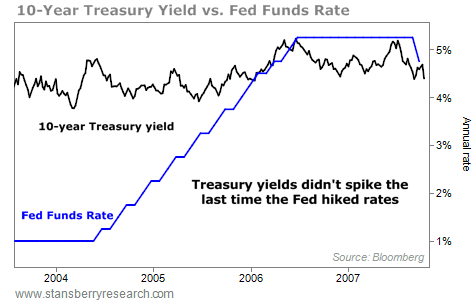 Could something similar happen again this time around? Absolutely.

And here’s another important point…

Stocks didn’t start to fall until the Fed CUT interest rates in late 2007.

So I have two important messages for you today…

Just this week, long-term interest rates in Germany fell to NEGATIVE interest rates. (That was on government bonds maturing in 2021.) Our reality today is that we live in a low-interest-rate world.

I can’t guarantee it, of course. But I think there’s a strong likelihood that long-term interest rates won’t go up much at all when the Fed finally raises interest rates.

This is why stocks (and real estate) can still soar higher.

In today’s low-interest-rate world, even if the Fed raises short-term interest rates, there will still be no alternative for savers and investors… They’ll have to put their money into stocks.

So let the talking heads on TV worry about the effects of a rate hike by the Federal Reserve. But don’t you worry about it. It won’t end this bull market…