That’s generally a smart decision, be it a new computer or anything else.

Valuing stocks is an incredible skill to possess that can literally change your life, which is why you should check out Dave Van Knapp’s guide on the subject.

Once you get the hang of valuing companies, you realize that stock prices are far from necessarily representative of “fair value” or what you should pay.

Price is simply what a stock is offered at today.

And that price may or may not be a good deal.

But how would you know?

If you always pay what someone’s asking for anything and everything in life, where do you think that will get you?

Without having some gauge of value, you’ll never know if you’re paying too much and thus wasting money.

I’ve spent five years of my life valuing companies and buying stocks only when I thought they were priced fairly or better, which is partly how I was able to accumulate a six-figure portfolio in a relatively short period of time on a modest salary.

And almost every single stock I’ve ever purchased can be found on David Fish’s Dividend Champions, Contenders, and Challengers list, which tracks and documents more than 600 US-listed stocks with at least five consecutive years of dividend growth.

Now, I was able to build my portfolio through prudent purchases, but also regular purchases. I don’t bother timing the market, but I do focus on individual company valuation.

As such, I’m always on the lookout for a good opportunity to add a cheap stock. And I may just have found one.

This might not be a popular pick right now due to the falling prices of crude oil, but Exxon Mobil has been there and done that. It’s a $367 billion company that’s survived many cycles and there doesn’t appear to be any reason on the horizon as to why they won’t once again.

In fact, it’s times like now that keep the big fish in the pond dominant, as they’re in a more defensive position, and makes other companies more attractive potential acquisition targets.

Nonetheless, Exxon Mobil has managed to rack up 32 consecutive years of dividend raises, which is a feat that very few energy companies in the world can claim.

And over the last decade alone, the dividend has grown at an annual rate of 9.8%.

Combine that with a current yield of 3.17% and you can see there’s an attractive total return proposition here.

It’s hard to go wrong with a high-quality stock that yields north of 3% and is growing the dividend near double digits.

The payout ratio is low, at 36.4%. However, because XOM’s earnings can be volatile, that margin of safety probably isn’t as large as it might seem on the surface, especially with the way oil is priced lately. But I also see no reason why the dividend would be in danger.

We’ll take a look at Exxon’s growth over the last decade, which may give us some idea as to where they’re going. It’ll also help us value the company. However, we need to keep in mind that, due to the cyclical nature of oil as a commodity, the growth isn’t as secular as some other companies out there. The long-term demand for oil appears to be there, but the ride along the way can be a bit bumpy.

Earnings per share improved from $5.71 to $7.60 over this period. The CAGR for EPS then is 3.23%. Again, Exxon Mobil is no growth stock, but it is a defensive play as an investment in a company that is providing the world a required commodity. But their financial results do oscillate a bit, due to the volatile nature of oil pricing. And the growth rate depends on which period you use, as earnings didn’t accelerate in FY 2014 due to oil’s rather substantial drop over the second half of the year.

S&P Capital IQ predicts EPS will compound at a -11% rate over the next three years, citing production volume growth concerns and low oil prices. Of course, XOM’s results will largely depend on the price of oil over this time frame.

One extremely bright spot for the company is the balance sheet. One of only three US companies with a AAA rated balance sheet from S&P, the long-term debt is negligible.

Profitability metrics compare well to peers, though Exxon Mobil is really operating at another level. The company has posted net margin that’s averaged 8.33% over the last five years and return on equity of 23.37%.

Exxon Mobil is the world’s largest publicly owned energy company. So in terms of defensiveness in a volatile industry, XOM is tough to beat. For instance, crude oil is down over 40% over the last six months, while XOM is down less than 13% over the same stretch.

As a dividend growth stock, XOM is about as good as they come. It’s a blue-chip harbor of safety in energy. But is the stock a good deal right now?

The stock’s P/E ratio is 11.44 right now, which is almost exactly in line with its five-year historical average. That would seem to indicate the stock is pegged at pretty close to fair value. However, it’s interesting to note that the current yield is about 60 basis points higher than its five-year average.

But what’s the stock worth? What should we pay?

I valued shares using a dividend discount model analysis with a 10% discount rate and a 7% long-term growth rate. That growth rate would appear aggressive based on more recent results, but over the very long term, that’s about the rate at which Exxon has grown.

Factoring in a comfortable payout ratio and Exxon’s penchant for raising the dividend in the high single digits, I think a 7% long-term growth rate for the dividend is fairly reasonable. Of course, if oil stays this low for a decade or more, that could cause issues for the dividend and its ability to grow. The DDM analysis gives me a fair value of $98.44.

It would seem that XOM is moderately undervalued from where I’m standing, but I’m not the only opinion around. We’ll compare my valuation with what some of the professional analysts have come up with to see if they jive.

Looks like I’m not alone here, falling somewhere in the middle. Averaging out the three numbers gives one final number to work off of, which is $100.48. That valuation would indicate that the stock is potentially 15% undervalued right now, which would be a rare opportunity to pick up a blue-chip stock at a sizable discount. However, keep in mind that volatility could continue for the foreseeable future due to supply and demand concerns with oil. 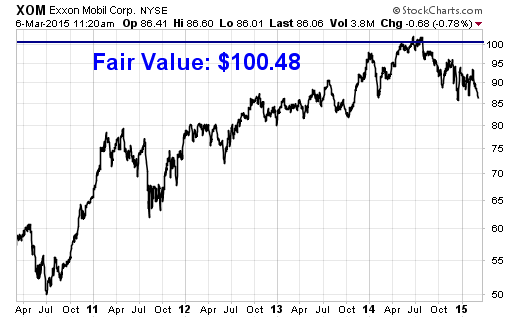 Bottom line: Exxon Mobil Corporation (XOM) is the world’s largest publicly traded integrated oil and gas company. The odds of it failing are extremely small, which gives one peace of mind while also being exposed to energy. It’s increased dividends for more than three consecutive decades, which also includes lengthy periods of very low oil prices.

Exxon has “been there and done that” in regards to volatile/low oil prices, and I see no reason they won’t do it again. Shares appear undervalued right now, offering their highest yield in more than five years. I would take a strong look at this bastion of safety in the energy sector for value and yield.