Imagine being able to invest in one of the world’s best-known brands.

It’s an iconic company, whose products can be easily differentiated from everything else out there.

And that differentiation allows them to charge a premium over most of the competition, even while their customers continue to happily pay that premium.

They sell a product that billions of people around the world consume every single day. In fact, their main products contain stimulants that are mildly addictive, leading to an arguably somewhat captive client base.

[ad#Google Adsense 336×280-IA]And while the company is established and global, it’s still growing at a very robust rate.

Buying this company’s common stock just five years ago would have more than tripled your money.

What company am I speaking of?

Starbucks is a global roaster, marketer, and retailer of specialty coffee, operating in 65 countries across more than 21,000 company-owned and licensed stores.

Starbucks has been on fire since bringing back Howard Schultz as CEO in January 2008. They’ve rapidly, but smartly, expanded both domestically and abroad, while also focusing on strategic acquisitions – like Teavana – that make sense within the brand.

And they’ve invested in their brand image beyond just core products by maintaining healthy exposure to social media and offering mobile payments and loyalty programs.

Those moves have helped propel the company’s growth and client loyalty to impressive levels.

And it doesn’t look like they’re slowing down. S&P Capital IQ is calling for 18% compound annual growth in EPS for the next three years.

SBUX has increased its dividend for the past five consecutive years.

That’s a rather short track record, but only because the company didn’t initiate a dividend until 2010.

However, what they lack in a lengthy record of dividend raises they more than make up for in terms of dividend growth. The three-year dividend growth rate stands at a lofty 25.2%. And that growth, while enormous, is largely supported via EPS growth.

And because earnings per share has been growing at a robust rate, the payout ratio is low, at just 38.7%. That means the company could continue to grow the dividend at a level above EPS growth for the foreseeable future.

The only potential drawback here is the stock’s yield. At only 1.35%, that doesn’t offer a lot to like for those interested in sizable passive income today.

The quality of this firm continues with the balance sheet. With a long-term debt/equity ratio of just 0.39 and an interest coverage ratio of 56, the balance sheet is like a fortress that puts SBUX on solid financial ground.

Profitability metrics are also sound. Starbucks has posted net margin that’s averaged 8.50% over the last five years and return on equity of 25.41%. Both of these numbers have improved markedly over recent years.

Starbucks owns one of the world’s best brands, in my opinion. You’ve got a fantastic and simple base product, but they deliver it in a way that keeps the people coming. And they connect with their customers in a way that’s perhaps unprecedented. Meanwhile, expansion into other non-coffee beverages and food has diversified their lineup. And taking on multiple channels like instant coffee, K-cups, and RTD products gives them further diversification.

But it really comes down to this: What are the odds that people stop drinking coffee? Slim to none, right? Thus, the odds remain high that SBUX will continue to capture a large chunk of that global business. It’s an easy-to-understand business model selling a product that is ubiquitous and that which people crave all over the world.

Overall, this appears to be a low-risk investment. But it is a competitive field and getting more competitive all the time. The company, like most global behemoths, is exposed to currency effects, which have been a headwind lately. And any change in input costs regarding coffee can have a dramatic effect on SBUX’s results.

SBUX is offered at a P/E ratio of 28.60 right now, which seems fair for a company of this quality and growth. That’s even considering it’s well in excess of the broader market.

In trying to come up with a fair value, I valued shares using a two-stage dividend discount model analysis with a 10% discount rate. The growth rate I used for the first ten years is 18%, which is not only in line with their predicted EPS growth rate for the foreseeable future, but well below dividend growth to date. It seems reasonable, considering the low payout ratio as well.

I used a terminal growth rate of 7%, which also seems reasonable when keeping mind the high quality of this company and its incredible brand. The DDM analysis gives me a fair value of $111.34, which would potentially point to this stock surprisingly being in value territory. 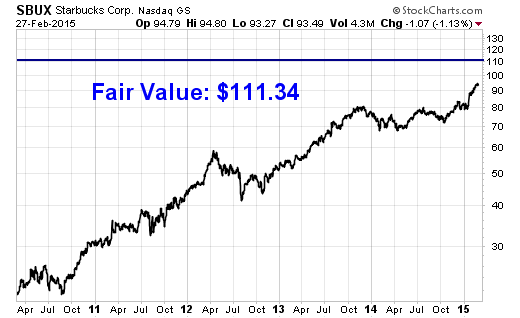 Bottom line: Starbucks Corporation (SBUX) owns one of the world’s most loved and well-known brands. Their primary coffee products are ubiquitous, where customers all over the world are glad to pay a premium for a premium product. And even while they’ve experienced massive growth over the last 10 years, the company continues to grow with no slowing in sight. It appears that this company is primed for years – perhaps decades – of solid dividend growth, which means this could be a great time to get on this ride before it takes off.