It appears to be getting more and more difficult to find undervalued high-quality stocks out there.

And I say that because the broader stock market – the S&P 500 – is currently clinging to all-time highs.

But that doesn’t mean we give up, right?

I look at the stock market like a store with merchandise, because, as a market, that’s essentially what it is. Except, in this case, that merchandise is stocks.

Just like you wouldn’t go into the grocery store interested in buying anything and everything, I stick to what I know and like – stocks that routinely and regularly shower shareholders with cash in the form of increasing dividends.

But that’s where today’s article comes to the rescue.

As a 32-year-old investor who’s actively accumulating income-producing stocks which will one day pay for my early retirement, I’m always interested in adding high-quality dividend growth stocks to my portfolio.

But I also refuse to overpay.

See, I’m interested in not just buying great stocks that provide me growing cash flow, but I want a good deal on them. As such, I’m always on the lookout for undervalued dividend growth stocks.

It’s critical to focus on both quality and value.

And it’s also critical to remember that price and value are not necessarily one and the same. In fact, it’s highly unlikely they’re one and the same. That’s because stock prices fluctuate every single day the stock market is open, yet values, especially on major companies fluctuate very little.

Price is what you pay, but value tells what you receive in turn. What if you were to pay $50 for a stock only worth $40? How would that make you feel when you know that you not only overpaid by 25%, but also potentially sacrificed a lifetime of more dividend income since price and yield are inversely correlated?

You’d probably be pretty bummed out.

Thus, determining a company’s intrinsic value is incredibly important as it pertains to one’s ability to succeed as an investor. And a great tool toward that end is Dave Van Knapp’s lesson on stock valuation.

We’re going to look at one stock today that seems to be undervalued at today’s price, which could provide you an excellent opportunity.

Amgen, Inc. (AMGN) is a global biotechnology company that develops and manufactures a range of human therapeutics.

Their leading position in biotech has allowed them to initiate a dividend, which it has increased for the past five consecutive years.

While that track record isn’t particularly lengthy or impressive, what is impressive is the rate at which the dividend is growing. Over the last three years alone, the company has increased its dividend by an annual rate of 63.3%.

Keep in mind, however, that the high dividend growth rate has come about in large part due to an expanding payout ratio, now standing at 47.2%. So that dividend growth will likely slow markedly, though still likely to stay at an attractive rate.

AMGN currently yields 2%, which is a bit below my general preference.

But certainly still offers some strong income in this low-rate environment.

The dividend is definitely growing at a very attractive rate here, so this could be a great time to pick this stock up right as it starts a multi-decade run of dividend raises.

And it’s not just the dividend that’s growing, either. Revenue and profit are also both growing at robust rates, as we’ll see below.

Meanwhile, earnings per share grew from $2.93 to $6.70 over this period. That’s a CAGR of 9.63%. Very solid growth here, though, as mentioned, the dividend growth will likely slow considerably.

S&P Capital IQ predicts that Amgen’s EPS will compound at an annual rate of 10% over the next three years, which is right in line with what we see above.

Looking at Amgen’s balance sheet, there is some debt there. But they’re not in an uncomfortable financial position.

The long-term debt/equity ratio is 1.17, which is a bit higher than I’d like to see. And the interest coverage ratio is 6.3. These numbers actually don’t compare all that unfavorably to competitors, however, where a decent amount of debt on the books is somewhat common.

Profitability metrics are really solid, though do trail some competitors a bit. The company’s posted net margin that’s averaged 27.64% over the last five years, with return on equity that’s averaged 20.30%. However, these are still extremely healthy numbers in absolute terms.

Amgen’s fundamentals look great across the board. The company’s growing at a healthy clip, increasing its payout to shareholders, and the company is extremely profitable. In addition, they’ve got a solid pipeline that should allow them to continue developing biotech drugs that solve human medical conditions.

Shares are available for a P/E ratio of 23.60 right now, which is substantially higher than its five-year average of 15.7. Keep in mind, however, that the stock has been on a meteoric run over that period, up some 175%.

What should we actually pay for the stock?

I valued shares using a dividend discount model analysis with a 10% discount rate and an 8% long-term growth rate. That rate is on the upper end of what I normally use, but I’m factoring in the moderate payout ratio, the robust dividend growth rate, the healthy underlying profit growth, high profitability, and solid pipeline. The DDM analysis gives me a fair value of $170.64.

So this stock appears undervalued based on my analysis, but my opinion isn’t the only one out there. Let’s see what some of the professional analysts value this stock at.

Morningstar rates AMGN as a 4-star stock, with a fair value estimate of $178.00.

That’s a tight range there, with my analysis, Morningstar, and S&P Capital IQ all coming to similar valuation conclusions. If we average out the three numbers, we get $173.25. That would indicate shares are potentially 10% undervalued right now. 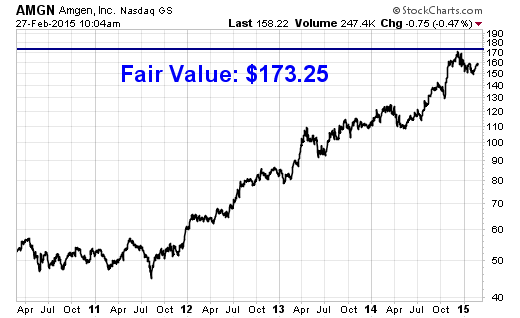 Bottom line: Amgen, Inc. (AMGN) is a global leader in biotechnology with some of the world’s best-selling drugs in its portfolio. Strong fundamentals across the board indicates that this firm is very healthy here. The yield’s perhaps a bit low for some, but the dividend is growing at an extremely robust rate. It’s not often one can purchase a high-quality healthcare firm for 10% less than it’s worth in today’s market, but that appears to be the case here. I’d take this opportunity seriously right now.