The big drop hasn’t happened yet.

I’ve heard a lot of predictions over the last two years about how a major stock market correction is imminent.

And yet we haven’t really seen anything over that time frame. Instead, the S&P 500 index continues its march upward.

2015 seems like a good time for the market to take a breather and pull back significantly; however, we’re already almost two months into the year and that hasn’t happened.

Dividend growth stocks, as they’re called, pay you to own them.

So if a major correction does occur, you’re collecting regular cash payments which can not only absorb some of the shock of any volatility to the downside, but you can reinvest that cash flow all along the way.

These stocks are exactly what you’ll find on David Fish’s Dividend Champions, Contenders, and Challengers document, which tracks more than 600 stocks that have increased their respective dividends for at least the last five consecutive years.

But that’s not it.

Undervalued stocks are those that are priced below their intrinsic worth.

Now, price is easy to determine. That’s available by pulling a stock’s quote at any point throughout the trading day.

However, a stock’s worth is a bit more difficult to ascertain. But fear not. There’s a great tool to help get you started if you’re unfamiliar with the process. Dave Van Knapp’s guide to valuing stocks is a great starting point.

Buying a high-quality dividend growth stock for less than it’s worth gives you a lot of cushion in the form of a margin of safety. That means your potential downside is somewhat limited.

For instance, a stock that’s priced at $50 but only worth $40 isn’t only likely to be repriced closer to its intrinsic value, but a major market correction could drag that stock even lower.

Meanwhile, a stock that’s priced at $30 but truly worth $40 means it’s less likely to be dragged down much further as it’s already cheap.

I’m always looking for great stocks that fall under the latter scenario so as to add them to my Freedom Fund.

And there’s a well-known technology company whose stock may be priced below what it’s worth.

Microsoft Corporation (MSFT) is a technology company that designs and licenses a wide range of software products and services. In addition, it designs and manufactures certain hardware components and products. The company also delivers online advertising solutions.

Microsoft needs no introduction as one of the largest technology companies on the planet.

Their Windows and related software packages have been uniquely and massively successful across the span of decades, and these products are still going strong thanks to strong enterprise licensing.

And while a continued shift toward mobile devices with operating systems other than Microsoft’s has weighed on future growth prospects, Microsoft has been engaging in new growth platforms, like commercial cloud.

Now, while Microsoft is a household name, what might be less known is their dividend growth record.

The company has handed out dividend raises for the past 12 consecutive years, which is fairly impressive in the tech space, which can be fast changing.

And the dividend growth rate itself is robust.

The dividend has grown at an annual rate of 21.8% over the last decade, though recent raises have been somewhat smaller.

Yielding 2.89% right now, this is an attractive pick for anyone who needs a great combination of both current income and growth of that income. It’s not often you’ll find a stock yielding near 3% with dividend growth in the double digits.

Even better, the payout ratio is a perfect 50%. That means the company is keeping half of profits to continue growing the company and sending out the other half to shareholders in the form of a dividend. A really great mix.

So what you have here is a stock that offers an attractive yield, but also a dividend that’s growing at a rather significant rate and will likely continue growing due to the healthy payout ratio.

We’ll now look at some of the fundamentals, specifically growth across the top and bottom lines. That’ll help us determine what the company is worth.

Revenue has grown from $39.788 billion in fiscal year 2005 to $86.833 billion in FY 2014, which is a compound annual growth rate of 9.06%. Whenever a company is able to generate revenue growth near double digits over a decade, that’s a really solid result.

Earnings per share increased from $1.12 to $2.63 over this period. That’s a CAGR of 9.95%. Very similar to revenue growth, though helped by considerable share buybacks – shares outstanding are down approximately 23% over the last decade. It should be noted, however, that bottom-line growth has slowed somewhat recently, which is something to keep an eye on.

S&P Capital IQ predicts that EPS will continue to compound at an annual 9% rate over the next three years, which would be in line here.

One of the most attractive aspects of this business is its balance sheet. First, the company has more than $84 billion in cash on hand, which is enormous. And a long-term debt/equity ratio of 0.22 is impressive by itself, but the interest coverage ratio, at over 47, indicates just how financially healthy Microsoft is. They could pay off all of their long-term debt and still have well over $50 billion in cash. Furthermore, they’re one of only three US companies with a AAA credit rating by S&P.

Profitability metrics are robust. The company has generated net margin that has averaged 27.93% over the last five years and return on equity that’s averaged 34.47%.

There’s pretty much nothing to dislike here across the board. The balance sheet is stellar, the profitability is robust, and the company continues to grow at a healthy clip thanks to healthy licensing in Windows and growth projects in cloud.

However, even great businesses aren’t worth overpaying for, as described above.

The stock’s P/E ratio is 17.29 right now, which compares unfavorably to its five-year average of 13.5. Though, that average appears a bit low, considering the quality and growth here. It should also be noted that this stock is down 10% YTD after a recent earnings report that was slightly below expectations.

But what is this stock worth? What should we pay?

I valued shares using a dividend discount model analysis with a 10% discount rate and a 7.5% long-term growth rate. This rate appears appropriate considering MSFT’s quality, payout ratio, and historic growth. The DDM analysis gives me a fair value of $53.32.

My analysis seems to indicate that shares are attractive right now. But what do others think about this stock and its valuation?

Morningstar rates MSFT as a 3-star stock, with a fair value estimate of $46.00.

While nobody is saying these shares are an absolute steal here, it does seem that there’s some consensus on this stock being slightly undervalued right now. If we average out these three numbers so as to arrive at one final valuation, we get $49.07. That would indicate that MSFT is potentially 14% undervalued right now. 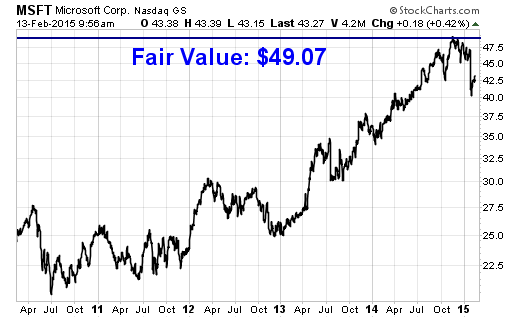 Bottom line: Microsoft Corporation (MSFT) is a high-quality company with broad exposure both software and hardware, with especially attractive businesses in enterprise licensing. And growth categories like cloud offer some exciting appeal here. The yield is attractive and covered by healthy earnings. It’s highly likely that not only does the dividend continue growing, but at a rather significant rate for the foreseeable future. Shares potentially appear as much as 14% undervalued, which is a rarity in today’s market. I would definitely consider MSFT at today’s price.