In January, we told you oil tycoon Harold Hamm was about to lose a lot of money.

Hamm, the founder and CEO of shale-oil giant Continental Resources (CLR), is a smart businessman. He has been drilling for oil for more than 40 years. But he made one common investment mistake… He failed to “respect the trend.”

Hamm made a huge wrong bet in October that oil prices would rebound to $90 per barrel. With oil at around $50 per barrel today, this bet will cost Continental around $1.6 billion.

Several other companies went against the trend.

That’s because the prices of natural resources are based (almost) solely on supply and demand.

If there’s more supply than demand, prices will fall. But if there’s more demand than supply, prices will rise. That means companies in the natural resource sector have almost no control over the prices of the products they sell.

Compare that with companies in the electronics industry, for example. Tech giant Apple decides the price of its iPhones. Sure, the company has to pay attention to what its competition is doing. It won’t sell many iPhones if it prices them way above other phones. But in general, Apple can decide what price to sell its product for.

However, while energy companies can’t set their own prices, they do have a way to protect themselves against declines in oil and gas prices… It’s called hedging.

Hedging is when energy companies lock in the price of the oil and gas they sell for a set time in the future. For example, an energy company may have guaranteed contracts to sell oil for $90 per barrel from now through 2016. That’s hedging.

Doing this reduces the company’s exposure to severe price shocks. If oil falls to $50, like it has today, the company is guaranteed to get $90 per barrel for its oil through 2016. But hedging also means that if oil rises to $100 per barrel, the company will lose out on the higher price.

So if a company is betting on higher energy prices, it will hedge less than if it’s betting on lower energy prices. That’s what happened with Continental Resources. The company thought oil prices were headed higher, so it hedged less. And it wasn’t the only one…

And nine companies didn’t hedge their energy production for 2015 and 2016 at all.

In short, the majority of North American energy exploration and production companies must now take the daily price of crude oil and natural gas for their production… and that’s costing them a lot of money.

The price of the benchmark West Texas Intermediate (WTI) crude oil has fallen around 50% since its peak in June 2014. Meanwhile, natural gas prices are down around 40% in the same timeframe. 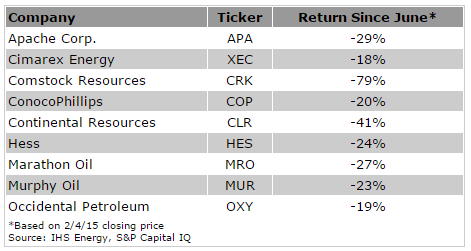 These companies are already down double digits since oil prices peaked in June 2014. And since these companies haven’t locked in the price of oil and gas for any of their future sales, shares are likely headed lower.

Some of these companies are less at risk for big share price drops than others. ConocoPhillips (COP), Hess (HES), and Occidental Petroleum (OXY) have seen smaller price drops because they have assets that aren’t wholly reliant on commodity prices to generate profits. So it’s unlikely their shares are headed too much lower based on today’s low energy prices.

But avoid the other six names – Apache (APA), Cimarex (XEC), Comstock (CRK), Continental, Marathon (MRO), and Murphy (MUR)– on this list right now. Their sales are 100% exposed to oil and gas prices. They will benefit when oil and gas prices go up, but with prices still down (and possibly headed lower), there’s likely more pain ahead.