It’s the strategy I’m using to try and achieve financial independence by 40 years old, all on a modest salary.

After all, you’re generally investing in high-quality companies that not only have consistent and lengthy records of rising revenues and profits, but these companies share a healthy chunk of those increasing profits with shareholders in the form of growing dividends.

You’re an owner and you should get paid like one.

But this strategy is even more powerful when you’re able to buy stocks for less than what they’re worth.

The price a stock is selling for and the value of that respective stock are almost always not one and the same.

And it’s important to not only make that distinction, but also to know how to properly value stocks so as to know how much you should pay.

Toward that end, I’d recommend checking out this article on valuing stocks by Dave Van Knapp.

Valuing something and buying it for less than fair value is something we’re all interested in, and that goes for just about everything in life.

If a can of soup normally sells for $2.00, would you not load up the pantry with cans if they’re on sale for $1.00? If your favorite pair of jeans are normally $40 and is all of the sudden $20, are you not excited to buy a pair?

That same line of thought is true for stocks.

If I feel reasonably confident a stock is worth $50 and it’s on the market for $40, I’m probably scrambling for cash so that I can pick up as many shares as I can to add to my portfolio.

As such, I’m usually scanning David Fish’s Dividend Champions, Contenders, and Challengers list for undervalued, high-quality dividend growth stocks. David Fish’s list includes over 600 stocks that pay and increase dividends, all of which have at least five consecutive years of dividend raises under their belts.

During one of these recent scans, I came across a potential opportunity.

And I’m going to share what could be a significantly undervalued dividend growth stock with you readers.

Qualcomm, Inc. (QCOM) develops and licenses products and services based on its advanced wireless broadband technology including semiconductors for mobile phones.

Qualcomm is a rather large company – the market cap is north of $111 billion. And they’ve grown into such a large company by leveraging their technology in CDMA and OFDMA, which has allowed them to collect royalties on the vast majority of all 3G and 4G phones sold since the company almost all necessary patents used in these networks.

So with the rise in popularity of smartphones and mobile data, so has gone the growth of Qualcomm.

Their dominant position in wireless chips has allowed them to increase their dividend payments to shareholders for the past 12 consecutive years.

And the dividend growth is nothing short of extremely impressive.

The company has increased its dividend by an annual rate of 21.7% over the last decade.

What’s wonderful is that even though the dividend has grown at such an incredible rate over the last decade, it hasn’t come at the expense of a high payout ratio – the payout ratio currently stands at a low 35.5%.

The stock currently yields 2.47%, which is attractive not only in comparison to many stocks in this industry as well as the broader market, but also relative to QCOM’s five-year average yield.

If the dividend has grown that much over the last decade and the payout ratio is still low, one could surmise that the company’s profit must also be growing at a rather brisk pace.

Let’s take a look at that, at how fast the company’s grown over the last decade. This will help us with valuing the business so we can determine how much we should pay for the stock.

Revenue was $5.673 billion in fiscal year 2005. That grew to $26.487 billion in FY 2014. That means revenue grew at a compound annual rate of 18.67%. The company’s obviously participated in the massive growth of mobile phone and data usage over the last decade.

Earnings per share increased from $1.26 to $4.65 over this time frame, which is a CAGR of 15.61%. Double-digit growth in both revenue and earnings is nothing short of extremely robust.

S&P Capital IQ predicts that EPS will grow at a compound annual rate of 9% over the next three years, which would be a significant slowing. This is something to keep an eye on, though 9% growth, if that materializes, would still be an attractive result.

Qualcomm is somewhat similar to a number of other major companies in Big Tech in that their balance sheet is flawless. The company has no long-term debt and over $17 billion in cash and cash equivalents. This is outstanding.

The company’s profitability metrics are also impressive. QCOM has posted net margin that’s averaged 28.8% over the last five years and return on equity of 18.45%.

Fundamentally, this about as good as it gets. Double-digit growth, a balance sheet that’s a fortress, extremely healthy margins, and a growing dividend.

However, even the best businesses aren’t worth paying any price for. Overpaying, even for high-quality businesses, can lead to lackluster returns and the loss of potential income.

The good news is that QCOM doesn’t appear to be particularly expensive.

QCOM’s P/E ratio stands at 14.37 here, which is well below the broader market. Even more notable, QCOM’s five-year average P/E ratio is 21.0. So the potential of slowing growth has certainly hit this stock hard, but the company is obviously still incredibly healthy. This could be a case of short-term volatility, which opens up long-term opportunity.

But what exactly should we pay for this stock? Can we put together an estimation of its fair value?

I valued the stock using a dividend discount model analysis with a 10% discount rate and a 7.5% long-term growth rate. That growth rate is on the upper end of what I normally use for my analyses, but it appears warranted here as the company has demonstrated an ability to grow at a robust rate. Furthermore, a low payout ratio means the dividend has plenty of room to grow even faster than earnings. The DDM analysis gives me a fair value of $72.24.

It would appear that we might have a high-quality stock trading below fair value here. But I’m not the only one who thinks so. Let’s see what some professionals that follow and analyze this stock think about its fair value.

Morningstar rates QCOM as a 4-star stock, with a fair value estimate of $75.00.

Looks like we have some consensus here. I came in a little on the light side, but it’s clear that the prevailing opinion on this stock’s valuation is that it’s priced at a discount right now. If we average out these three numbers, we get $78.08, which means this stock is potentially 15% undervalued right now. 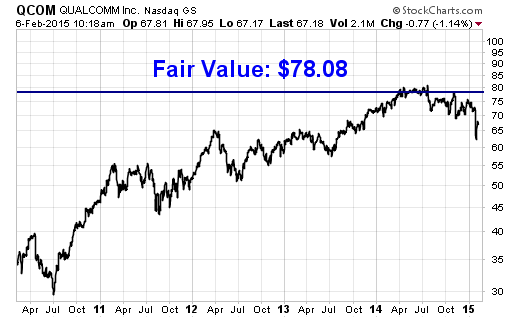 Bottom line: Qualcomm, Inc. (QCOM) is a high-quality company with an entrenched business that provides them unique licensing and royalty revenue due to their massive number of patents in key technology used in most handsets. This has enabled them to pay growing dividends for over a decade while also growing the underlying business at a very rapid rate. A $17 billion cash hoard is very attractive, and a low payout ratio means they’ll likely continue growing the dividend for the foreseeable future. Furthermore, shares appear significantly undervalued right now. I would consider this stock at today’s price as an excellent opportunity.