Who doesn’t love a good deal?

I think it’s fair to say that nobody shies away from one, whether it be food, electronics, real estate, or stocks.

You’d probably be pretty excited, and nobody would blame you. You’d be landing an asset far below what it’s really worth, meaning your financial net worth just increased by about $60,000.

[ad#Google Adsense 336×280-IA]See, I try to find similar opportunities in the stock market, which can be just as lucrative, albeit on a smaller and perhaps more repeatable scale.

I’ve found these opportunities over and over again, leading to the six-figure portfolio I’ve been able to build up over the course of just a few short years on a very modest income.

These opportunities exist because there’s often a difference between price and value in the world, leading to those aforementioned deals.

Price certainly tells you what you’re going to pay for something.

But value tells you what you’re receiving in return.

Being able to tell the difference between the two is an invaluable skill when it comes to investing, but it’s also an incredibly difficult skill to master. And that’s probably why you see only a few truly incredibly successful investors out there in the world, like Warren Buffett.

One tool that can help you master this is this piece that was put together by Dave Van Knapp.

I’m always searching for opportunities where a stock’s price is far below its intrinsic value, which are sometimes hard to come by in a stock market that’s up more than 76% over the last five years.

While a real estate investor might use local MLS listings to search good deals, my preferred stock shopping list is David Fish’s Dividend Champions, Contenders, and Challengers document. The CCC list has already filtered out the entire stock market into just those US-listed stocks that have increased their respective dividends for at least the last five consecutive years, all 611 of them.

For a dividend growth investor, this list is a fantastic resource.

While the stock market has indeed had an incredible run over the last five years, there’s one well-known, blue chip stock that appears to be glaringly cheap right now.

International Business Machines Corp. (IBM) is an information technology company, engaged in creating value and solving problems for clients. They operate in over 170 countries.

IBM is about as blue chip as it gets. In fact, their nickname is “Big Blue”, albeit in relation to their choice of blue as a common color across the company.

But this is a company that’s been around since 1910, just around the turn of the 20th century. And while that’s impressive in its own right, it’s even more impressive when you keep in mind that this is a technology company. Every time they were counted out as old and outdated, the company managed to find a way to turn the corner and adapt to changing winds in tech.

However, it’s current sentiment that “this time is different” which has largely led to the stock woefully trailing the S&P 500 over the last five years.

But I can tell you what’s not trailing: the company’s ability to pay increasing dividends and their penchant for delivering on that potential.

They’ve increased their dividend for the past 19 consecutive years, which is the type of consistency that is fairly uncommon in technology.

While their track record of almost two decades of rising dividends is impressive, the rate at which the dividend has increased over the last decade is perhaps even more so: The 10-year dividend growth rate stands at 19.8%.

A growth rate that high can sometimes lead to an unsustainable payout if underlying profit isn’t growing in kind, but IBM’s dividend metrics look very solid.

It’s not often you find a yield that high with a payout ratio that low, but that’s what you have here with IBM. It’s also clear that the high rate of dividend growth can likely continue since the company is sending shareholders a rather small portion of earnings in the form of a dividend.

But is this time different? Is IBM healthy?

Let’s take a look at their financial metrics and growth over the last decade, which will give us some insight there and also help with valuing the business.

Revenue was $96.293 billion in fiscal year 2004, which climbed to $99.751 billion in FY 2013. That’s a compound annual growth rate of just 0.39% over that period. Not what an investor likes to see, but one has to keep in mind that IBM has been focusing on higher margins and profits over absolute revenue growth. Not a bad strategy when your business has grown to the point of $100 billion in sales, which is a feat not many other companies out there can claim.

What has that focus delivered?

Earnings per share increased from $4.93 to $14.94 during this period, which is a tripling of profit. That’s also a CAGR of 13.11%. All of the sudden, the company looks pretty healthy. Of course, it wasn’t just margin expansion but also a substantial share buyback policy that generated some of this sizable growth in EPS – the company bought back 600 million shares over this 10-year stretch, reducing the share count down to near 1 billion.

S&P Capital IQ predicts that EPS will grow at a 5% compound annual rate over the next three years, which seems awfully conservative based on their historical growth. Although, they’re forecasting continued difficulty with the top line over this period.

At first glance, IBM maintains a leveraged balance sheet, but it’s actually not so. While the long-term debt/equity ratio is high at 1.44, this is primarily more due to low common equity than high absolute debt. And that’s apparently because the company has been turning into a tech services company. Meanwhile, the interest coverage ratio, at 49.6, is extremely high and healthy.

The company’s profitability is robust and improving. Net margin has averaged 15.22% over the last five years, but FY 2013 net margin was almost double that of FY 2004. Return on equity is unsurprisingly high, with an average of 75.4% over that time frame. This has more than doubled over the last decade.

It’s impossible to say if this time is different and IBM will turn the corner again, but you certainly have to love the fundamentals here. Usually, a stock sporting these kinds of numbers would be sought after, but IBM is actually a hated stock right now.

The P/E ratio stands at a lowly 9.73 right now, which is almost half the broader market. Furthermore, that’s also well below IBM’s five-year average of 12.6. So what’s usually a cheap stock has become possibly unreasonably cheap.

But what’s IBM actually worth?

I valued shares using a dividend discount model analysis with a 10% discount rate and an 8% long-term growth rate. That growth rate is on the upper end of what I usually use, but I’m factoring in a low payout ratio, substantial buybacks, and a historically large growth rate in profit. I see no reason why IBM’s dividend can’t continue growing in the upper single digits over the long haul, unless the business were to start to fall apart. The DDM analysis gives me a fair value of $237.60.

Seeing as how IBM is trading near $155 right now, I must be out of my mind to think it’s worth that much. Right? Well, let’s bring in some other opinions on this matter to see if we can come to some kind of consensus.

I’m a bit on the high side here, but there’s clearly a trend here where you can see that this stock is priced at a level far below what a lot of experts feel it’s worth. Averaging out the three numbers gives us a fair value of $215.20. Hmm, so we have similar numbers to the real estate example above, except this is a stock that’s possibly 39% undervalued right now. 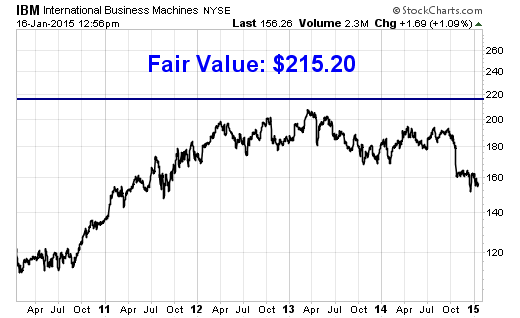 Bottom line: International Business Machines Corp. (IBM) is a world-class blue chip stock. The company offers entrenched information technology services with robust mainframe platforms that should continue to deliver revenue while some of the exciting, new areas of growth like mobile, security, and cloud become larger parts of the business. Meanwhile, you’ve got a stock that offers a yield near 3% that’s extremely well-covered and growing. IBM appears to be one of the best values on the market right now. If one should be greedy when others are fearful, the fear appears to be maxed out here with this stock. Are you ready to be greedy?