When you think of solid buy-and-hold, long-term investments, I think it’s fair to say that buying stock in companies that sell ubiquitous products and/or services that people all around the world need on an everyday basis seems like a no-brainer.

That’s why my portfolio is chock-full of these types of companies.

You definitely want to invest when and where the odds are on your side.

And the odds are good that people will still be be eating food like cereal, yogurt, ice cream, soup, and vegetables decades from now.

[ad#Google Adsense 336×280-IA]Even better when you can invest in branded products, which means the company that owns those brands has pricing power.

But investing in ubiquitous and necessary products that are also branded is like the one-two punch that every investor is looking for.

Just look at some of the brands this company owns.

These are not only well-known brands, but they stretch the gamut across food.

The odds of people not buying, say, Cheerios cereal in the future are quite low. This, this investment appears to be fairly low in risk.

Forming more than 150 years ago, the company is now a $32 billion giant with operations across more than 100 countries.

Let’s take a look at what General Mills has been up to over the last decade by investigating their growth, which may give us some insight on where they’re going.

Meanwhile, earnings per share increased from $1.54 to $2.83 during this period. That’s a CAGR of 6.99%. I consider a long-term growth rate of near 7% as pretty solid, especially considering the risk.

S&P Capital IQ is anticipating that EPS is going to grow at a compound annual rate of 7% over the next three years, which is right in line with their long-term average.

The company is growing at a fairly attractive rate, especially considering the market and products we’re talking about here. After all, this isn’t a tiny tech start up we’re discussing, but an established company that produces high-quality branded food products.

But it’s partly because they sell ubiquitous, branded food products that they’re able to share a good portion of their profits with shareholders in the form of a cash dividend. And not only do they pay a dividend, but they’re regularly and consistently increasing that dividend.

For the past 11 consecutive years, General Mills has given shareholders a “pay raise” in the form of increased dividends, which means this company is a “Contender” on David Fish’s Dividend Champions, Contenders, and Challengers list.

And these increases aren’t just a formality, as the company is is growing the dividend at a rather attractive rate – the ten-year dividend growth rate stands at 10.7%.

The stock yields 3.11% here, which is relatively high in comparison to the broader market.

That yield also seems pretty sustainable, though the payout ratio, at 68.6%, is a bit high.

That means for every $1 of profit, the company is sending almost 69 cents out in the form of a dividend.

The dividend may grow slightly slower in the future to compensate for this.

General Mills does maintain a leveraged balance sheet, but this is somewhat of a norm for them over the last decade. The long-term debt equity ratio stands at 0.98. And the interest coverage ratio is 9.34. Both of these numbers could stand improvement, but there’s also no reason to be particularly concerned here.

Profitability metrics tell us how well a company is performing in regards to using its assets and capital efficiently. If a company can take a low capital and asset base and turn a huge profit, that’s especially attractive, as it allows the company the opportunity to tie up less resources and return more capital to shareholders.

Well, GIS has done pretty well here. Net margin has averaged 10.5% over the last five years, while return on equity averaged 28.01%. These are pretty solid numbers in absolute terms, as well as relative to peers.

This just seems like one of the safest bets out there. You’ve got high-quality branded food products across the spectrum of an average person’s diet. From cereal to ice cream, General Mills is well-represented across the grocery store. And they’re not only diversified across products and brands, but also across the world. So while the US grocery store market is pretty mature and saturated, there’s plenty of growth still available abroad.

One other interesting aspect of this stock is its beta. Beta is a measure of volatility against the broader stock market. For instance, if a stock has a beta of 1, it moves in line with the market. So if the market is up 1%, that stock generally would be as well. A beta of 0.5 would then mean that the stock oscillates about half as much as the market, meaning if the market drops by 1%, then that stock would generally drop by just 0.5%. GIS sports a beta of just 0.17, which is one of the lowest I’ve come across. So if you’re looking for a stock that’s not very volatile in what is a volatile market, this one is probably one of the better possible ideas.

I do see risks, however. Primarily, demand for processed and prepackaged food has been declining over the last few years as people move to organic, fresh, and natural foods. However, General Mills has been fighting this by increasing its exposure to the organic space with acquisitions like Annie’s. The company also faces a lot of input costs that can vary, especially grain. Lastly, one company – Wal-Mart Stores, Inc. (WMT) – accounted for 21% of General Mills’s consolidated sales in FY 2014, which gives WMT bargaining power.

Looking at the valuation, the stock’s P/E ratio is 22.02 right now. That appears excessively high to me, especially since the five-year average P/E ratio for this stock is a more reasonable 17.6.

I valued the stock using a dividend discount model analysis with a 10% discount rate and a 6.5% long-term growth rate. That growth rate is just slightly below GIS’s ten-year EPS growth rate as well as their projected growth rate for the foreseeable future. So I’m attempting to build in a margin of safety here, which also takes into consideration the high payout ratio. The DDM analysis gives me a fair value of $49.90 on this stock. 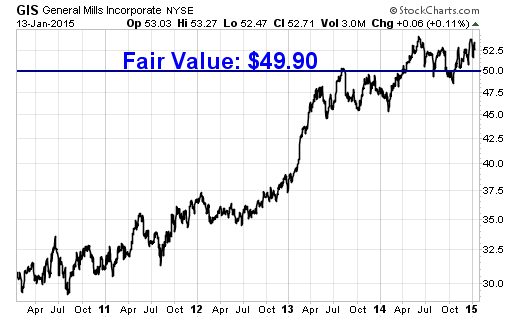 Bottom line: General Mills, Inc. (GIS) appears to be one of the safest possible stocks you can invest in. They own some of the world’s most well-known food brands, and they’re well-diversified across brands, products, and countries. And it’s unlikely that people are going to stop eating foods like cereal, ice cream, soup, or yogurt any time soon. Meanwhile, the market-beating yield pays you to invest in this company, and the odds are good that the dividend continues to grow for years to come. Although I don’t think the stock offers a margin of safety right now, this is a great stock to consider at a slightly better price.