One of the world’s most essential commodities is in a terrible bear market.

Iron ore, the building block for steel, has fallen 66% over the past four years… and 53% this year alone. Many iron ore miners are down double digits.

That means their prices go through big cycles of boom and bust.

Iron ore is in “bust” mode right now, thanks to a global oversupply and a slowdown in demand from places like China, which is a huge consumer of iron ore.

As you can see in the chart below, iron ore prices are now near their 2009 low. 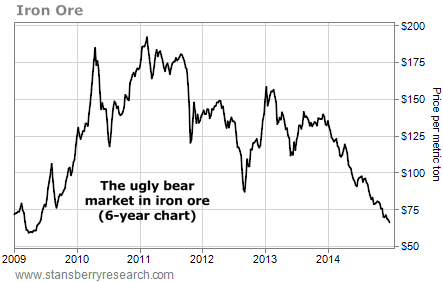 But after the market leaves a natural resource for dead, things often get better. Production drops… demand picks up… prices eventually boom… and the share prices of miners soar.

And we’re starting to see production of iron ore drop.

Iron miners in India, the world’s third-largest exporter just three years ago, can no longer ship iron ore economically. According to R.K. Sharma, the secretary general of the Federation of Indian Mineral Industries – a mining lobby group – the miners didn’t export “a single gram” in October and November. That’s because it costs more to produce than they can get selling it.

But this decrease in future supply isn’t enough to push prices up.

Roughly 80% of the world’s iron ore production is still viable at the current price. So iron ore prices will likely stay low until more current and expected production goes offline… or until we see demand pick up.

For starters, it’s likely their earnings will take a hit in the fourth quarter of 2014… and that will continue to push share prices down.

Shares of Fortescue Metals, a large Australian producer, are already down more than half over the past year. Vale, Rio Tinto, and BHP Billiton are also down double digits.

But there’s likely more weakness ahead as iron ore prices look for a bottom and these companies’ profit margins shrink.

The bear market in iron ore continues… So for now, stay away from mining companies that rely on iron ore for a large part of their revenue.